My Rotation as a Substitute Teacher

On the Pine Ridge Reservation, I found sparks of talent, resilience and curiosity—plus rampant absenteeism—among my students 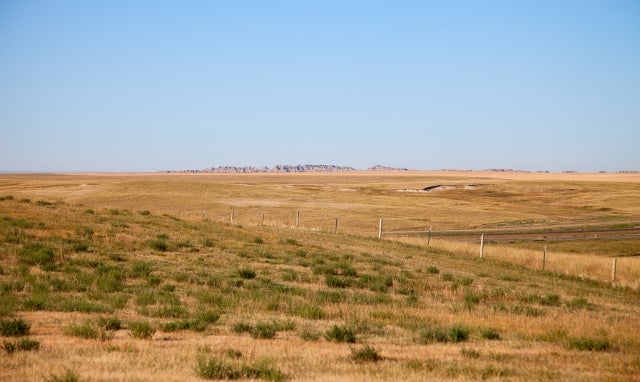 I have a good view from where I’m sitting, about halfway up the gymnasium bleachers. Pine Ridge High is behind, but they’re coming back. You can see the confidence building in the team, in how they pump their fists, nod in agreement at the coaches’ instructions from the sidelines and plant their feet like boxers anticipating their opponents’ next move. Kianna Walking Eagle starts the point with a nice serve, followed by a strong return by Gregory High. A dig, a setup and then a well-executed spike—point for Pine Ridge!

The stands wobble and shake, the result of an overtly vocal and raucous group of high school students sitting below me. Like those students, I have traveled more than 200 miles tonight—along lonely, open, two-lane roads that snake through endless honey-colored hills—to watch this women’s high school volleyball game.

It’s funny. I’ve been teaching these kids for three weeks, and I’ve never seen them pay this close attention to anything I’ve written on the board. But that’s OK; I’m paying attention to them.

I like what I see, and this time I’m cheering along. It may have been a long way to travel, but Pine Ridge has some terrific athletes. Kianna is a two-time South Dakota High School athlete of the week, while fellow sophomore Santana will later, under the watchful eye of college recruiters, lead the basketball team to the state finals.

Sitting in a high school gym in the middle of South Dakota, surrounded by young people with last names like Kills Enemy at Night, didn’t exactly fit in with what I was used to: the standard format of patient history, physical, assessment and treatment plan.

As a third-year medical student at Tufts, nearly all my time is spent in the clinical environment. For one month last fall, though, my official role was 10th-grade biology teacher at Pine Ridge High. This meant seven periods a day, for roughly 100 students total. Of course, I had a lot to learn in this new role, though I tried not to show it.

I didn’t just arrive with a book and a backpack. To make this little experience happen, there was an application, an interview, a logistical process and, of course, a bit of enterprise. In 1995, while a student at Harvard Medical School, Miles Cunningham, now a neurologist at McLean Hospital, was able to convince a reservation high school in South Dakota to allow him to come teach for a month. Soon after, he started “Asniya,” which means “to heal” in the language of the Dakota Sioux. Since then, more than 50 health-profession students have served as Asniya “interns.”

Pine Ridge Indian Reservation, in southern South Dakota, is home to roughly 30,000 Oglala Sioux. It is one of the largest reservations in the country. According to some measures of wealth, it is also the poorest, with an unemployment rate around 80 percent.

Type “Pine Ridge Reservation” into Google, and “poverty” is the next word that comes up. Encumbered by alcoholism, depression and a rate of diabetes five times the national average, the life expectancy is 48 for men and 52 for women. Outside of Haiti, that’s the shortest life expectancy for any community in the Western Hemisphere.

What would I find there? As I made the six-hour drive from Denver through Wyoming, Nebraska and ultimately to Pine Ridge, the confluent effect of statistics and perception evoked a degree of anxiety in anticipation of the challenges and accomplishments I could expect in the next month. It wasn’t as though I felt completely unprepared. I had been out of college several years before starting medical school, with jobs like bookseller and bicycle messenger ranking among the eclectic work experiences I had accumulated during that time.

High school teacher, however, was not one of them. High school students can be difficult in any time or place—were these kids going to walk all over me? Drug use, safe sex, even health careers were all subjects I was likely to spend some time on, but how could I present any of this in a way to maintain their interest and motivation? What were they going to expect from me, if anything?

Mrs. Williams, the warm, grey-haired teacher whose class I would be taking over, made me feel welcome with her agreeable demeanor and good sense of humor. She was beloved and respected (usually) by the students, drove 90 minutes each way between work and home and was in her 42nd year of teaching at Pine Ridge.

The space itself was surprisingly modern. I found a classroom well equipped with an interactive white board that would make lessons fun and lively. The hallway floors were designed in school colors, lined end to end with spacious lockers and sports trophy cabinets long since undersized to hold their contents.

Built in the last 15 years, the school had a large cafeteria that filled to capacity during the single lunch hour. A new dorm had been built across the way that housed dozens of students. The entire facility seemed well planned and well maintained.

On my first day, short video clips of bronchoscopies and colonoscopies drew the intended reaction, and multiple-choice trivia questions (e.g., If you eat a burrito for lunch, what time do you poop it out?) brought a chorus of responses such as “It’s C—I saw that on TV!” or “It’s A—that happened to my brother!” amid a disharmonious chorus of “Eww!” and “Gross!”

At the end of the second week, a student asked me if I had any intention of discussing drugs or alcohol. This brought a class vote between “drugs,” “alcohol,” “tobacco” or “nothing.”

Drugs won. An unscientific follow-up poll found that major subjects of interest were marijuana and, most interestingly, the effects of drugs on pregnant women. Marijuana was seemingly everywhere, and a high rate of teen pregnancies made these topics very relevant to my students.

In general, their questions usually impressed me more than their answers, which hinted at the degree of hidden talent waiting to be actualized. Two examples stand out. Jessica, in my fourth-period class, always arrived in her daily ensemble: jeans, fingerless gloves, black T-shirt, fire-red hair and periodic laugh. She was part Goth, part rebel and as I came to know, all writer. Near the end of my month she showed me the nearly 60-page manuscript she had written about a fictional group of young friends and their coming of age. She was guarded about its contents, but the few pages of prose I read left me wanting more.

Jeremy was not in class my first day, but within a few weeks, it became obvious that he was an extremely bright young man who could go anywhere he wanted. Straight-faced, slim, serious and taller than you might have expected when he stood up, Jeremy was a guard on the basketball team.

Despite sitting in the front and finishing his tests in 10 minutes, he balanced his enthusiasm with a cool affect of near indifference, his voice rarely leaving a narrow band of mild amplitude. When I taught a lesson about the neuronal synapse and the effects of cocaine, I wasn’t expecting students to appreciate the specific neurotransmitters, but it was Jeremy who calmly pointed out how we were talking about dopamine.

Mrs. Pendleton, who taught chemistry across the hall, agreed that this was a student with great promise. When there was an early finish to a lesson, or a lull in the class, he would ask how I got into studying science and medicine, or how I got involved with this program and ended up on Pine Ridge. His interest in my motivation and career choice, displayed with almost guarded curiosity, demonstrated an impressive level of abstract thought that again hinted at his potential. What that potential would become, specifically, was uncertain, but it was there.

Unfortunately, however, absenteeism was rampant, and dropping out was commonplace. On my first day, I noticed a student reading a collection of Edgar Allan Poe stories. The next day I had planned on asking him about his favorite. I never saw him again. He could have left for any reason, but the number of students who stopped showing up, or were out for weeks at a time, was something I had not seen before.

On our last day, after completing their group review test with flying colors, one of the students said to me, “I can see I learned a lot, but I didn’t realize it as it was happening.” It was probably the best thing I could have heard a student say, and one I couldn’t help but smile about and relate to as his teacher and a student myself.

The following afternoon found me buckled into seat 21A, with my bag in the overhead compartment and the information for my upcoming internal medicine rotation lying on my lap. I tried to read it, but my mind kept wandering, from volleyball games and open roads to what Poe called in one of his poems “the fervent flickering torch” of youth.

This article first appeared in the Summer 2012 issue of Tufts Medicine magazine.

Michael Kemmer hopes to get back to Pine Ridge someday soon.