The Secret Life of Bees

Noah Wilson-Rich, G11, an ecologist investigating the collapse of honeybee populations, has made it his business to encourage urban beekeeping

In a lush backyard in Inman Square in Cambridge, a man-made beehive, three stories high, sits nestled among a riot of leafy plants. A few bees drift in lazy circles. A low buzz, almost subsonic, emanates from the hive.

Dressed in the traditional white beekeeper’s garb, Noah Wilson-Rich, G11, extracts a honey-laden comb from the hive. Many generations of domesticated living have made these bees quite docile, and they produce copious amounts of honey. The insects are apparently unperturbed by Wilson-Rich, whose neatly trimmed blond beard makes him appear a little bee-like himself. He dips a finger into the sweet dark amber liquid. The honey, made from the nectar of the plants near the hive, is redolent of Caribbean spices, cinnamon and chocolate.

An ecologist and professional beekeeper, Wilson-Rich lifts his mesh facemask to taste the bounty of the hive. “I could talk about bees for hours,” he says. An adjunct professor of biology in Tufts’ School of Arts and Sciences and at nearby Simmons College, he is on a quest to save honeybees from a mysterious ailment that has wiped out more than a third of the world’s hives each winter since 2006.

A dwindling bee population matters to all of us. Bees pollinate about 130 types of U.S. crops, including apples, almonds, cotton and soy. About a third of all the food we eat comes from plants that depend on domesticated honeybees to pollinate them. Without bees, we could see food prices increases or, worse, food shortages.

An expert in bee immunity, Wilson-Rich is busy finding ways to bolster bee health, developing vaccines against common bee ailments and testing dietary supplements that may keep bees from getting sick in the first place. His work with bees doesn’t end when he leaves his private lab, appropriately headquartered in the basement of a flower warehouse in Boston’s South End. Wilson-Rich also champions small-scale urban beekeeping, the lately trendy practice of having a couple of hives in the backyard or on the roof deck. He founded Best Bees, a company that installs and maintains more than 60 private beehives in eastern Massachusetts. When he’s not in the lab, Wilson-Rich is tending to the Best Bees-installed hives, using old-school beekeeping techniques to harvest honey and keep the bees buzzing.

Wilson-Rich, 29, didn’t dream of a life with bees. Born in Manhattan and raised in Fairfield, Conn., he was a self-described gay theater kid who struggled in school. With some parental pressure to become a doctor, he found himself studying biology as an undergraduate at Northeastern University, working as a phlebotomist at Boston’s Children’s Hospital and thinking about a career in infectious diseases.

But then he took a class in sociobiology—the study of how our DNA and our environment affects our behavior in a group. His professor, Rebeca Rosengaus, a termite expert, became his mentor. In Rosengaus’ lab, Wilson-Rich infected termites with a parasitic worm and watched how that changed the bugs’ behavior. “The interaction between social living and biology just clicked with me,” he says.

Like termites—their evolutionary cousins—honeybees are eusocial insects, meaning that individual bees perform specific tasks and cooperate in the care of young, much as in a utopian human commune. But communal living in close quarters is one reason why bacterial infections, viruses and parasites spread like wildfire through a hive.

As a doctoral student in biology at Tufts, Wilson-Rich began studying bee immunity in 2005, the year before honeybees started vanishing mysteriously throughout North America and Europe. Working in the lab of the Tufts behavioral ecologist Philip Starks, he pioneered a way to measure the strength of bees’ immune response.

The method drew on his work as a phlebotomist at Children’s Hospital, where Wilson-Rich became deft at sticking people with needles and drawing blood. In Starks’ lab, he became equally adept at pricking bees. After anesthetizing a bee by sitting it on an ice cube, Wilson-Rich learned to insert a short length of very fine fishing filament into the bee’s body, leaving it there for a few hours until it was dark with black bee blood.

“When we remove [the filament] and take her off the ice, she can fly away,” he says.

Bee blood appears black because it’s loaded with melanin, the pigment that lends color to human skin. A byproduct of melanin production are quinones, antimicrobial chemicals that are key players in honeybee immunity, so the more melanin in the blood, the healthier the bee—a relationship Wilson-Rich uses to determine bees’ stamina after they’ve been exposed to a disease or to a vaccine.

“When I started my research, I realized very little was known about how the immune system works in a healthy bee, so we couldn’t understand how a disease impacts it,” he says. “Then bees started disappearing, and all of the sudden it mattered so much more.”

The Silence of the Bees

It’s not unusual for beehives to fail over the winter. Commercial keepers expect to lose 10 to 30 percent of their hives every year to starvation, extreme cold or disease. But in 2006, the losses were eerily large—between 30 and 100 percent of commercial hives in different parts of the United States. The hives were full of pollen and honey, but few bees. The queen would be in residence, sometimes accompanied by her larval young, but there were no other adult bees—a condition that came to be known as colony collapse disorder (CCD).

Scientists don’t know what causes CCD, and the absence of bee bodies in the abandoned hives contributes to the difficulty in identifying a culprit. The list of suspects is long. Agricultural insecticides are an obvious candidate: scientists at the Harvard School of Public Health published research in the Bulletin of Insectology in June linking a widely used pesticide, called imidacloprid, with hive losses. But viruses, parasitic infections, fungal infections, climate change and toxins in the environment are also all possible suspects.

What’s more, commercial beekeepers send millions of bees all over the United States to pollinate crops as needed throughout the year. They’ll spend time in California servicing the almond crop, then head to Florida to pollinate the orange trees before working the blueberry fields of Maine. The stress of travel, says Wilson-Rich, can make bees more susceptible to illness.

Wilson-Rich is investigating how probiotics, or beneficial bacteria, might fortify bees against viruses, parasites and fungal infections.

“I thought, what if we could infect bees with something that makes them stronger, healthier?” says Wilson-Rich, who won a $10,000 award from Dow Chemical’s Student Sustainability Challenge in 2009 for his bee immunity research.

In the beginning, he vaccinated bees just the way physicians inoculate people, with an injection. Then it occurred to him the bees might simply eat the probiotic mixed with the sugar water he feeds them. They did, eliminating the logistical nightmare of individually vaccinating the tens of thousands of bees that occupy a single hive.

Wilson-Rich is equally committed to the lowest-tech way of strengthening bee immunity. It turns out bees that live in the city are more likely to survive the winter than their rural counterparts. Urban bees produce more honey, too. 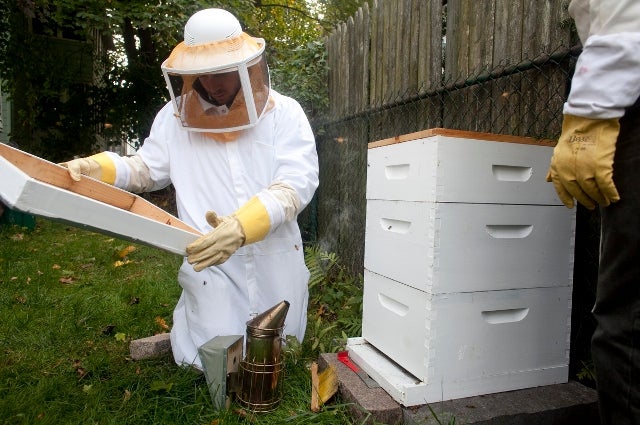 “When I started my research, I realized very little was known about how the immune system works in a healthy bee, so we couldn’t understand how a disease impacts it,” says Noah Wilson-Rich. Photo: Kelvin Ma

Research from France, where beehives have graced the roof of the Paris opera house for 25 years, suggest that city bees are hardier because they find a greater diversity of plants and flowers buzzing around downtown than commercially kept bees, which dine on one crop at a time.

Wilson-Rich uses his Best Bees Company to help spread the gospel of urban beekeeping. For an annual fee, he’ll set up and maintain hives in clients’ backyards, decks or rooftops. He sinks all of the profits back into his own research.

“Noah is, in essence, acting as his own start-up company and its venture capitalists,” says Starks, his Tufts Ph.D. advisor. “Noah has a flair for business. In fact, it is his business-related skills that most clearly distinguish him from other young researchers at this stage of their careers.”

Among his clients is the Fairmont Copley Plaza Hotel in Boston, which needs the bees to pollinate the parsley, chives, sage, rosemary, thyme, lavender and basil grown in its rooftop garden. His other clients live in cities and towns from Boston to Provincetown on Cape Cod, where a wayward black bear this summer plundered one hive for its honey.

Though it’s not bear-proof, Wilson-Rich favors the Langstroth hive, a simple wooden box containing eight to 10 frames that hang like file folders in a desk drawer. Bees build wax honeycombs on the frames, storing food or baby bee larvae in each hexagonal cell. For his clients without much room to spare—such as one planning to keep bees on a roof deck in Boston’s South End—Wilson-Rich uses just one hive to house up to 80,000 bees. In a more spacious backyard, he can arrange three or four more hives to hold nearly half a million bees.

Wilson-Rich checks up on clients’ hives every two to four weeks, making sure the bees are prodcuing baby bees, making honey and remaining free from parasites. When the combs are heavy with honey, he harvests it the old-fashioned way, placing one dark amber comb at a time atop a bucket and letting gravity do the work over three or four days. For those unwilling to endure the slow-drip harvest, Wilson-Rich deploys a honey extractor that uses a hand crank and centripetal force to fling the honey from the comb.

With beehive kits now for sale at high-end gourmet stores, urban beekeeping has hipster appeal. New York City legalized rooftop hives in 2010. Wilson-Rich, who favors suits and bow ties when he’s not in his beekeeping outfit, has become a sought-after speaker, talking about bees and dispensing advice at universities, town meetings and gourmet food shops. (His talk at TEDxBoston in June already has more than 140,000 views.) He’s also been in talks with the Boston Redevelopment Authority and the Mayor’s Urban Agriculture Working Group, which is interested in developing realistic guidelines for the Hub’s would-be urban beekeepers.

“It’s all about placement, especially with urban hives. Point the hive away from where people are,” says Wilson-Rich, who notes that he would like to see Boston’s guidelines include educating backyard beekeepers, setting up a registry and instituting routine hive inspections. The formalities, Wilson-Rich says, should help eliminate some of the fear and misunderstanding many people have about bees.

“If you are not a flower, they will fly around you,” he says. “Many of my clients use the hive as a planter. One of my clients uses the hive on his deck as a coffee table. He takes his morning coffee out and just watches them. I know that’s counterintuitive to what many people think, but to me, the bees are just beautiful and calming.”

How Do Bees Make Honey?

Bees adjust to seasons with nutrients in flowers and ‘dirty water’

Bees to the Rescue