The medical and environmental promise of dissolving, ultrathin semiconductors packaged in silk 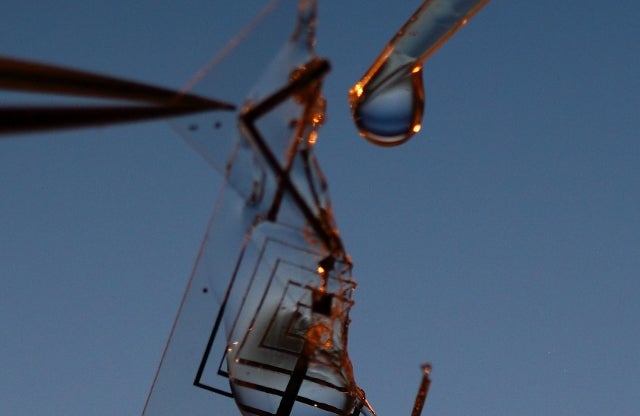 Tiny, fully biocompatible electronic devices that are able to dissolve harmlessly into their surroundings after functioning for a precise amount of time have been created by a research team led by biomedical engineers at Tufts University, in collaboration with researchers at the University of Illinois at Urbana-Champaign.

Dubbed “transient electronics,” the new class of silk-silicon devices promises a generation of medical implants that never need surgical removal, as well as environmental monitors and consumer electronics that can become compost rather than trash.

“These devices are the polar opposite of conventional electronics whose integrated circuits are designed for long-term physical and electronic stability,” says Fiorenzo Omenetto, professor of biomedical engineering at the Tufts School of Engineering and a senior and corresponding author on the paper “A Physically Transient Form of Silicon Electronics” published in the Sept. 28 issue of Science.

“Transient electronics offer robust performance comparable to current devices, but they will fully resorb into their environment at a prescribed time—ranging from minutes to years, depending on the application,” Omenetto explains. “Imagine the environmental benefits if cell phones, for example, could just dissolve instead of languishing in landfills for years.” 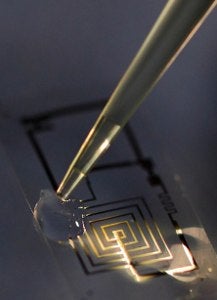 “While silicon may appear to be impermeable, eventually it dissolves in water,” Fio Omenetto says. Photo: Fio Omenetto
The futuristic devices incorporate the stuff of conventional integrated circuits—silicon and magnesium—but in an ultrathin form that is then encapsulated in silk protein.

“While silicon may appear to be impermeable, eventually it dissolves in water,” says Omenetto.  The challenge, he notes, is to make the electrical components dissolve in minutes rather than eons.

Researchers led by the University of Illinois’s John Rogers—the other senior and corresponding author—are pioneers in the engineering of ultrathin flexible electronic components. Only a few tens of nanometers thick, these tiny circuits, from transistors to the material connecting them, readily dissolve in a small amount of water or body fluid and are harmlessly resorbed, or assimilated. Controlling materials at this scale makes it possible to fine-tune how long it takes the devices to dissolve.

Device dissolution is further controlled by sheets of silk protein in which the electronics are supported and encapsulated. Extracted from silkworm cocoons, silk protein is one of the strongest, most robust materials known. It’s also fully biodegradable and biofriendly and is already used for some medical applications. Omenetto and his Tufts colleagues have discovered how to adjust the properties of silk so that it degrades at a wide range of intervals.

The researchers successfully demonstrated the new platform by testing a thermal device designed to monitor and prevent post-surgical infection (demonstrated in a rat model) and also created a 64-pixel digital camera.

Collaborating with Omenetto from the Tufts Department of Biomedical Engineering were Hu Tao, research assistant professor and co-first author on the paper; Mark A. Brenckle, a doctoral student; Bruce Panilaitis, program administrator; Miaomiao Yang, doctoral student; and David L. Kaplan, Stern Family Professor of Engineering and department chair. In addition to Tufts and the University of Illinois, co-authors on the paper also came from Seoul National University, Northwestern University, Dalian University of Technology in China, Nano Terra in Boston and the University of Arizona.

In the future, the researchers envision more complex devices that could be adjustable in real time or responsive to other changes in their environment, such as chemistry, light or pressure.