Women’s soccer goalie Phoebe Hanley, A13, arrived on campus this semester and got her first look at the new Steve Tisch Sports and Fitness Center. She was, to say the least, impressed.

“My first words were, ‘We’ve got to start playing like this building looks!’ ” she says.

The opening of the 42,000-square-foot Steve Tisch Sports and Fitness Center on the Medford/Somerville campus underscores in a big and bold way the university’s longstanding commitment to healthy living for students, faculty and staff.

“Boy, was it worth the wait,” says Athletics Director Bill Gehling, A74, G79, A05P, who played soccer as an undergraduate and coached the women’s soccer team before taking on his current role in 1999. “I’ve always been proud to be a Jumbo. Now I’m even prouder still.”

The Tisch Sports and Fitness Center opened on the first day of classes; a formal dedication ceremony will take place on Oct. 22.

“All my friends are just thrilled with this new gym,” says Hanley, an economics major from Mamaroneck, N.Y. “This building says, ‘We are Tufts. This is where we work, and work hard.’ ”

The new facility delivers a message that is felt keenly across campus, but one that the university’s older gym space, cramped and outdated, frankly didn’t convey: that personal fitness and athletic endeavor matter here.

With highly regarded health sciences schools, including the Friedman School of Nutrition Science and Policy, and an annual marathon challenge that has trained hundreds to run the Boston Marathon to raise funds to support nutrition research, Tufts has made a name for itself as a place that values and promotes healthy living. 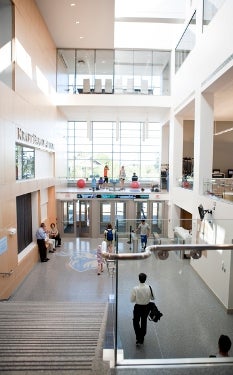 The Kraft Family Atrium in the Tisch Sports and Fitness Center. Photo: Emily Zilm
Jumbo athletes have been making a name for themselves as well. Tufts won its first-ever NCAA team title in 2010, when men’s lacrosse took the Division III championship. That same spring, women’s tennis tri-captain Julia Browne, A11, captured the Division III singles crown. And just this past spring, Johann Schmidt, A14, became the first men’s national diving champion from Tufts in three decades.

But the old fitness facilities, accessed through the basement of Cousens Gym and clogged by lines of students waiting to use the exercise equipment, weren’t up to championship standards. Named for Tufts’ sixth president, John Albert Cousens, the gym was lauded as the premier indoor college physical education and athletics facility in New England when it opened during the height of the Depression, on Feb. 9, 1932. The old gym remained the same until 2009, when a major renovation transformed the basketball court, originally built to high school specifications, into an arena that met NCAA standards for post-season tournament play so that men’s and women’s basketball could compete with home-court advantage.

In the interim, as the demand for places to practice, compete and play informally continued to increase, other venues were built or renovated. The Ames Human Performance Center/Lunder Fitness Center, for workouts, weight training and physical education classes, was dedicated in 1993. Recreational space for pick-up games and dormitory leagues became available in 1996, with the opening of the Chase Intramural Gymnasium. And in 1999, the 70,000-square-foot Gantcher Family Sports and Convocation Center, which houses the Hirsh Tennis Center and a 200-meter indoor track, came on board.

“If you build it, they will come,” the voice whispered in the film Field of Dreams. And come they have to the Tisch Center—for a quick lunchtime workout, a break from studying or a way to de-stress at the end of a long day (it’s open until 10:30 p.m. Sundays through Thursdays).

“I think we will definitely see an increase in the number of people going to the gym,” says Nick Martinez, a trainer with the Personalized Performance Program, which offers one-on-one training sessions to members of the Tufts community in a space designed just for that. “Tufts is a pretty fit community, and people are really excited about the new facility.”

Beaming like a proud parent, Gehling gave a visitor a tour of the center just before it opened. The wow factor is unmistakable.

Skylights illuminate the grand and airy Kraft Family Atrium, which is paneled in ash, the same wood used in baseball bats. Jumbo, the Tufts mascot, is inlaid into the atrium floor. Above, an electronic ticker broadcasts scores and highlights, for both Tufts and professional teams.

If you stand in the middle of the atrium and look up and to the left, you can see the sleek new fitness area, bracketed by floor-to-ceiling windows facing College Avenue and mirrors on the other wall. A fleet of exercise machines awaits the arms and legs that will push them into action: treadmills, stationary bikes and all manner of weight-training machines and free weights.

Across College Avenue is the Nelson Gateway Garden, with a winding brick walkway that gives student athletes and spectators a more direct path to playing fields and the Cousens parking lot. 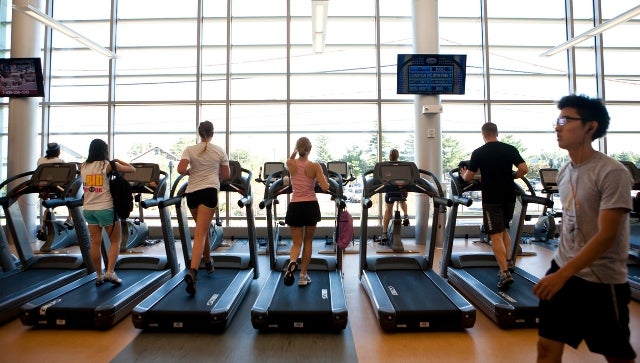 “We are reclaiming this entrance to the university,” Gehling says. “You never get another chance to make a first impression, and the first impression from a facilities standpoint for years was that athletics wasn’t important.” For decades the entrance to the athletics center was at the bottom of a loading dock. It didn’t give the message that health and fitness mattered. “The facility has finally caught up to the message: the importance of health and fitness to Tufts,” he says.

The Tisch Center also features a dramatic central plaza, made possible by the Howe Family Foundation. It leads into the core of the new facility, which adjoins the Gantcher Center and Cousens Gymnasium.

In addition to the brand-new fitness space available to the entire Tufts community, student athletes and coaches have new team locker rooms, a film classroom for off-the-field instruction and the Mugar Sports Medicine Suite for injury rehab. Multipurpose teaching and activity rooms provide venues for aerobics, Pilates, dance and physical education classes. And there are new offices for coaches and administrators who previously worked in Halligan Hall, next to Cousens Gym.

“Athletics encourage personal development and the growth of students as leaders,” says Dan Kraft, A87, a university trustee and member of the Board of Advisors for Tufts Athletics. “It’s good to see sports and fitness even further integrated into the life of Tufts undergraduates.”

In keeping with the university’s commitment to sustainability, the building itself, clad in copper and glass, is an exemplar of green technology—high-efficiency plumbing fixtures, heat recovery, demand ventilation, high-performance glazing and solar-shading devices on the windows, automatic lighting controls and lots of natural light. Stanmar Inc., working with the architectural firms RGO Partnership and DiMella Shaffer, designed and built it.

Steve Tisch, A71, chairman of the New York Giants football team and an Academy Award–winning film producer, led the support for the facility with $13 million in gifts, including a $3 million challenge to inspire other alumni and friends to contribute. The Nelson Gateway Garden was made possible by a gift from John Bello, A68, A13P, and Nancy Bello, J69, A13P.

“In order to get this built, a lot of people had to step forward, not only with donations, but with making this a priority,” Gehling says. “Now we have the opportunity to give our amazing people in athletics the tools to do their jobs better than ever before. This is a huge, huge step forward.”

That goes double for the Jumbos already here. 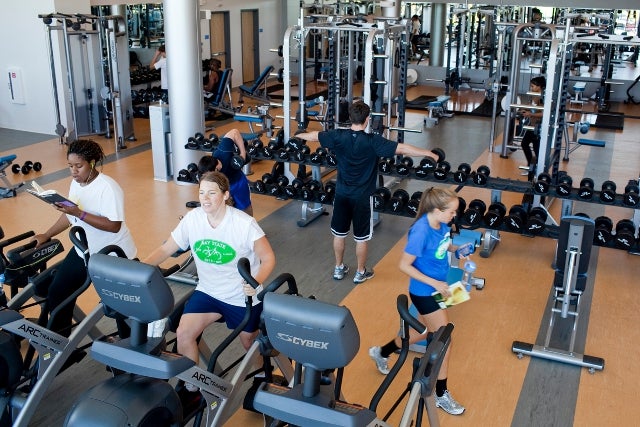 “I think we will definitely see an increase in the number of people going to the gym,” says Nick Martinez, a trainer with the Personalized Performance Program. Photo: Kelvin Ma

“The new Tisch Center is unbelievable,” says Dylan Haas, E13, a receiver on the football team and defensive midfielder in men’s lacrosse. “I feel this one project took our athletics facilities from lackluster and mediocre to state-of-the-art, on par with major collegiate athletic programs, even in Division I. I have had a chance to see almost all of the new facilities, and everything from the locker rooms to the film rooms to the ice baths and training room is incredible.

“I think this will have a great impact on the student experience and especially fitness at Tufts,” Haas says. “Students who already regularly come to the gym and work out will obviously continue to do so, but I think this is a great opportunity to attract those who don’t.”

Students who will graduate next spring say they are especially happy the facility has opened in time for them to use it.

“I think it is very fitting that the first class to experience and graduate with it will be the class of 2013, because of our great accomplishments on and off the courts, fields and track, as well as in and out of the classroom,” says Curtis Yancy, A13, a three-season athlete who throws shot put, weight, hammer and discus for men’s track and field and plays defensive end on the football team.

“Athletics have really defined my experience here at Tufts,” says Yancy, a psychology major from St. Louis. Limited space sometimes made it hard to schedule workouts and athletic training rehabilitation, he notes. “With the new facilities, everyone will be able to enjoy the fitness center and workout equipment.”

Students aren’t the only ones to benefit. The Tisch Center was designed with faculty and staff in mind, too. “I used the old gym occasionally, and this new gym is definitely an improvement,” says Mike Lupi, a senior web applications developer in University Relations. “I like how light it is—it has a nice, open layout. All the cardio equipment is brand new, and one small detail I really like: there are personal fans on the elliptical machines, which is great.”

Volleyball co-captain Natalie Bruck, A13, a biology and community health major from Hoffman Estates, Ill., says she wants the Tisch Center to serve as a booster shot for school spirit. “A lot of our friends will go to the gym and see us playing,” she says. “We hope they’ll bring their friends and stop by and see our games.”

Her fellow volleyball co-captain, Kiersten Ellefsen, A13, an international relations and anthropology major from Goshen, N.Y., agrees: “The buzz is all about the new fitness center,” she says. “Hopefully people will take more pride in this part of campus and want to spend more time here because it’s so sparkling and new.”

Mark Sullivan is a freelance writer in Ashland, Mass.