Price increases for corn—a direct result of the U.S. biofuels mandate—added $11.6 billion in costs for countries importing the food staple between 2006 and 2011. More than half the increase fell on poorer, developing nations, adversely affecting people who can least afford it, according to a new study by Timothy Wise, G05, research and policy director at the Tufts Global Development and Environment Institute (GDAE).

About 40 percent of all corn raised in the U.S. goes into ethanol fuel production, in part because of the Renewable Fuel Standard, which in 2007 mandated a steadily increasing percentage of renewable fuel in U.S. gasoline supplies. America produces 13.7 billion gallons of ethanol annually, according to the U.S. Department of Agriculture. The growing demand for corn used in ethanol has been driving up prices globally, with record highs in 2007–08, another spike in 2010–11, and again now. 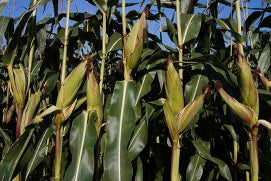 “For import-dependent countries that no longer grow much of their own food, biofuel-induced price increases are simply a large net loss to society,” writes Tim Wise. Photo: © Stefan Fierros/DepositPhotos
Combined with the widespread drought in America’s Corn Belt this year, the ethanol requirement has pushed the price of corn to record highs over the last four months. The “diversion of something on the order of 15 percent of global corn production from food to fuel has created a demand shock in global markets,” Wise writes in his report “The Cost to Developing Countries of U.S. Corn Ethanol Expansion,” which GDAE published as a working paper earlier this month. In recent years U.S. corn ethanol is estimated to account for 21 percent of corn prices.

Developing countries imported 280 million tons of corn between 2006 and 2011, and spent $6.6 billion more than they otherwise would have because of the U.S. biofuels mandate. Mexico assumed the greatest burden of any country—$1.1 billion more than it otherwise would have, driving up domestic costs for corn and corn products, Wise writes. The cost of tortillas, for instance, has risen 69 percent since 2005. Many Central American countries were equally adversely affected because they feed their growing populations with imported corn.

The rising demand for corn that is used to manufacture fuel has spillover effects: prices for other food staples, such as soybeans and wheat, have also gone up, according to the GDAE report.

The U.S. Environmental Protection Agency, which issued the biofuel mandate, should re-think its policy, Wise says, because the cost to poorer countries is too great. “For import-dependent countries that no longer grow much of their own food,” he writes, “biofuel-induced price increases are simply a large net loss to society, straining government trade balances, using scarce hard currency, raising food prices for consumers and driving up the cost of government safety-net programs.”