Linda Huebner, who holds an M.S. in animals and public policy from Tufts and is deputy director of advocacy at the MSPCA, highlights the changes

The most comprehensive piece of animal-related state legislation to be passed in decades, the new law modernizes some very old, ineffective rules—some dating back to the 1800s—while adding new provisions. It takes effect Oct. 31.

The legislation updates the state’s dangerous dog law so that it now nullifies existing city and town ordinances that focus on particular breeds, such ones that ban pit bulls or require them to be muzzled. Breed-discriminatory legislation has never proven effective at reducing dog bites, and it punishes all citizens living with a particular breed, whether they act as responsible owners or not. The new law requires municipalities to focus on the behavior of misbehaving dogs and their owners, regardless of the breed involved—for example, enforcing existing leash laws for all free-roaming dogs, which are the animals responsible for most reported bites. 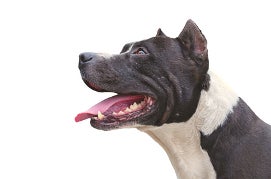 The new law requires municipalities to focus on the behavior of misbehaving dogs and their owners, regardless of the breed involved. Photo: © Natalia Kurzova/DepositPhotos
Another provision allows for restraining orders to cover companion animals in domestic violence cases. Massachusetts is now the 23rd state to specifically allow pets to be included in abuse prevention orders. Research shows that abusers sometimes harm animals in an effort to inflict injury on their owners, and that some domestic violence victims will stay in unsafe situations for the sake of their pets.

The new law requires all animal control officers to receive formal training. They are often the first responders to dangerous and difficult animal incidents, including dog bites, wildlife conflicts, reports of suspected animal cruelty and the handling of exotic pet escapees, such as the five-foot boa constrictor in Mission Hill that made local headlines earlier this year. Training will enable the officers to be more effective at protecting themselves, animals and the public. The new law also creates some statewide oversight and consistency for animal control in our 351 cities and towns.

In addition, the law creates a new statewide program to encourage owners to spay/neuter their pets, which will help reduce the number of unwanted litters, lowering the cost to cities and towns for housing homeless animals.

The law also should indirectly generate revenue for cities and towns, because animal control officers will be trained in how to increase dog-licensing compliance. The provisions that cost money, such as the animal control officer training and spay/neuter program, will be funded via a voluntary state income tax check-off.

For more on the law, visit www.mspca.org/animalcontrol.

Are nutrition bars really all that healthy?

Is it a good idea for dogs to get the canine Lyme vaccine, even if they already had Lyme disease?

Does eating meals together as a family help steer kids away from risky behaviors?

How can I make my relationship happier and healthier?