New study shows need for caution, as drugs like Prozac can have some adverse effects on babies 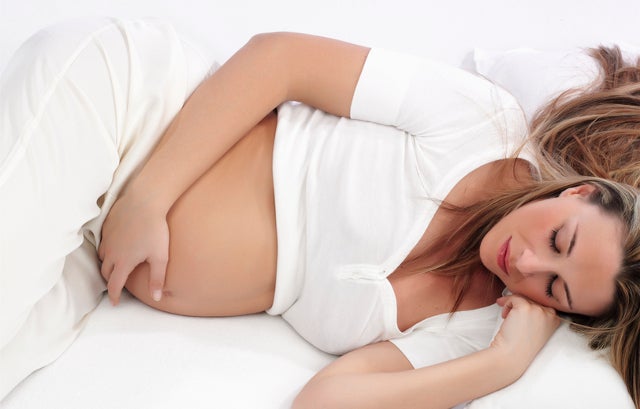 Depression—one of the most crippling and costly illnesses in the United States—is the leading cause of disability among people ages 15 to 44. Since Prozac hit the market in 1987, many Americans have relied on antidepressant medications to control their symptoms. One in 10 of us takes antidepressants, making them the third most common prescription drug, after painkillers and high blood pressure pills, according to a 2011 report from the National Center for Health Statistics.

Thought to be linked to increased rates of diabetes and heart disease, depression is also widely believed to adversely affect pregnant women by increasing risks for early delivery and low birth weight babies, as well as interfering with a child’s intellectual and emotional development. So it has become standard practice to treat the roughly 13 percent of pregnant women with symptoms of depression with selective serotonin reuptake inhibitors (SSRIs), the class of drugs that includes Prozac, Celexa and Zoloft. Physicians often assume that the benefits of these medications, which carry fewer side effects than the previous generation of antidepressant drugs, outweigh the risks.

But in fact, for most women, the opposite is true. Depressed mothers-to-be who take the drugs—as well as their babies—fare much worse than those who do not, according to Tufts researchers who reviewed the latest science about SSRI use during pregnancy in a paper published last month in the journal Human Reproduction.

Adam Urato, perinatologist in the division of maternal/fetal medicine at Tufts University School of Medicine and ob/gyn department chair at the MetroWest Medical Center, and his colleagues found study after study showing that the medicated moms have increased risk for a number of things: miscarriage, pregnancy-related high blood pressure, birth defects and premature delivery. The researchers also found studies linking fetal exposure to the antidepressants with cardiac and respiratory problems, growth and developmental delays—and even autism. Because there is mounting evidence that non-pharmaceutical treatments for depression, specifically cognitive behavioral therapy and/or exercise, work as least as well as drugs, Urato and his colleagues want women and their doctors to have more information about their options.

Tufts Now: You and your colleagues write that many doctors have assumed that depression poses more of a risk to a pregnancy than antidepressants do. Where did that assumption come from? 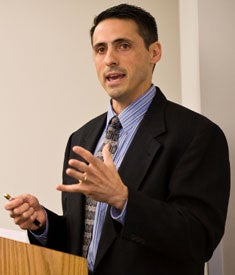 “If you’re going to have a woman taking pills throughout her pregnancy, she has a right to know—she deserves to know—what the scientific evidence is regarding the risks, benefits and alternatives to using medication,” says Adam Urato. Photo: Alonso Nichols
Adam Urato: There is a dominant paradigm out there that treats depression and pregnancy as analogous to, say, diabetes and pregnancy. So people think, just like you can improve a diabetic woman’s pregnancy by giving her insulin, you can improve a depressed woman’s pregnancy by giving her antidepressants.

The trouble is that is totally false. When you look at the scientific evidence, women who get treated with antidepressants don’t have better pregnancy outcomes. They actually do worse.

That’s the big story here. Why isn’t the public aware of these risks that we cite? We’re not making this stuff up. We cite all these studies that demonstrate this. The important thing is making patients, pregnant women, women of childbearing age and their ob/gyn providers aware of the risks. There’s a general lack of awareness.

Where does that lack of awareness come from?

I think it’s partly wishful thinking on the part of doctors, patients and the public. A depressed pregnant woman is a sad situation, and we all wish there was something we could give her without any risk.

Another reason that I think the public has an incorrect assumption on this issue is that a lot of the leading researchers and research centers are funded by the antidepressant makers. It’s self-evident why that’s problematic. When most of your leading centers and researchers who are supposed to be studying this are being funded by drug makers, it pushes the research, the findings and the interpretation in a certain direction. I like to believe in the goodness of my fellow man and scientists, but heavy funding creates a pressure on the scientific system in terms of what kinds of results and what kind of warnings the public gets.

It also takes a while for harm to show up when drugs are being used in a widespread fashion. We’ve seen this in other products. It took a long time to realize the risks of DES, which was given to pregnant women to prevent miscarriage from 1938 to 1971. [The synthetic estrogen actually caused birth defects and infertility in the adult children of DES moms.]

Prozac was launched around 1987, so we’ve been using it only for about 25 years, and now this information is beginning to come out. And it’s coming in a steady stream.

What are some of the findings?

There’s an increased risk of miscarriage. There have now been more than 40 studies looking at the relationship between SSRIs and preterm births, and something like 90 percent of those studies show increased rates of early delivery. There is a steady flow of findings pointing in the direction of increased risk.

Shortly after birth, some babies of mothers on antidepressants have jitteriness, crying, difficulty feeding. In the worst-case scenario, babies have seizures or respiratory distress so severe it requires intubation. That may be withdrawal from the drugs or it could also be something called serotonin syndrome, which happens when an excess of the neurotransmitter builds up between neurons in the brain. One study estimated as many as 30 percent of babies exposed to SSRIs during gestation experience this syndrome.

Four studies linked SSRI use to preeclampsia, dangerously high blood pressure in pregnant women. We’ve seen evidence of decreased fetal growth and decreased fetal head size. About 10 percent of babies exposed to antidepressants in utero will manifest cardiac changes we can measure on an EKG.

The conventional wisdom is often that risks of complications from these drugs are low. The rates are not low. A number of studies have shown the miscarriage rate among women who take SSRIs in the range of 12 to 15 percent; preterm birth rate has been reported to be as high as 20 to 30 percent. One study put the risk of preeclampsia higher than 25 percent. Among the general population, the risk of miscarriage is less than 10 percent; preterm birth occurs about 11 percent of the time, and just 7 percent of women experience preeclampsia.

Are there long-term consequences for the babies?

That’s the big unknown. Fetal development is a pretty complex process. The developing embryo is loaded with serotonin receptors, and serotonin plays a crucial role in fetal development. Serotonin is the major neurotransmitter that drugs like Prozac act on to alleviate the symptoms of depression and other mood disorders. What happens when we chemically alter human development this way? The answer is we just don’t know, but animal studies that have looked at bonding and other social behaviors have concerning findings. Study after study shows significant changes in brain development and in behavior.

Now the human data is pointing in that direction as well. A few studies show motor changes; in one particular study, children exposed to antidepressants were learning to sit up 16 days later than their peers and learning to walk 29 days later. A 2011 study from Kaiser Permanente has shown a doubling of the risk of autism.

It goes beyond the brain. Serotonin is also found in the gastrointestinal tract, lungs, blood platelets and bones. It’s a crucial neurotransmitter. Without sounding too alarming, we shouldn’t be surprised that altering [serotonin levels] could cause complications.

Is it your opinion that pregnant women should not take antidepressants?

Giving good care to women isn’t about telling them what to do. It’s about providing them with accurate information, and then they can decide what they want to do. They know themselves and the severity of their depression better than anyone.

The key first step in taking care of patients—especially with regards to medication use—is counseling regarding the risks, benefits and alternatives. My own frustration as an ob/gyn is that I see a lot of these women who just have not been adequately counseled.

If you’re going to have a woman taking pills throughout her pregnancy, she has a right to know—she deserves to know—what the scientific evidence is regarding the risks, benefits and alternatives to using medication. That’s what this paper tries to make clear.