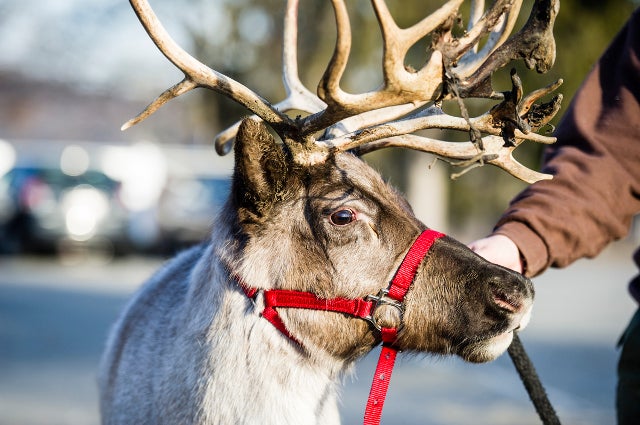 When all of those other reindeer wouldn’t let poor Rudolph play in any reindeer games, maybe it was for the best. After all, that’s probably how Willow, a reindeer at the Stone Zoo in Stoneham, Mass., wound up needing knee surgery just 12 days before Christmas.

“She has a dislocated kneecap, and it’s a pretty bad one,” says Robert McCarthy, V83, a veterinary orthopedic surgeon at the Cummings School of Veterinary Medicine, who gave Willow the best present this year: a fix to her bum knee. “It’s hard to pull Santa’s sled with an injury like that,” he says. “She needs her hind legs for thrust.”

McCarthy and his surgical team at Tufts’ Foster Hospital for Small Animals operated on Willow on Dec. 13, and the prognosis for a happy holiday is good.

Zookeepers at the Stone Zoo aren’t exactly sure how 20-month-old Willow hurt her knee a couple months ago, but they suspect she was just horsing around with a male reindeer companion about her age. Whatever happened, it left the kneecap of her right hind leg untethered, allowing it to slip in and out of its proper position. When it’s in place, the reindeer seems fine. But when it’s out, “she’s quite lame,” says Eric Baitchman, the director of veterinary services at the zoo. “It’s not something that’s going to get better without surgery. Tufts very generously offered to help. We very much appreciate it.”

Though Baitchman and his team are well equipped to care for most of their zoo charges, Willow’s knee surgery was an unusual case, requiring specialized orthopedic instrumentation and equipment. “Not to mention the level of skill that comes with a boarded orthopedic surgeon,” says Baitchman. “It’s not the type of thing we do regularly, and our desire is to get her the best possible care.”

So Baitchman and Willow’s handler, senior zookeeper Dayle Sullivan-Taylor, loaded Willow into a hay-lined trailer and made the hour-long drive from Stoneham to North Grafton, where McCarthy put Willow’s knee back together again in a procedure formally known as a tibial crest transposition.

McCarthy, who specializes in orthopedic and soft-tissue surgery, estimates about 100 dogs come to the Cummings School for this procedure every year. A relatively straightforward operation in small animals, the surgery involves securing the kneecap in place using pins and wires. But a 165-pound reindeer, says McCarthy, requires sturdier materials.

“Those little pins and wires are accessible to private practitioners,” he says. “But she’s very large, so when she flexes her knee, it pulls against the repair with incredible force. We use a special plate and screws.”

Watch a video of Willow the reindeer at the Cummings School. Video: Marc Serra

By 9 a.m. on the day of her surgery, Willow had been sedated, lifted by seven people onto a gurney and wheeled into a prep room decorated with paper snowflakes. As the team of vets prepped her for surgery, curious onlookers gathered at the three windows overlooking the surgical suite. “Is that Prancer or Dancer? I can never tell,” someone mused in the hallway.

Meanwhile, the surgical team wrapped Willow’s two-foot antlers in towels and began to shave the area around the right knee. “Aw, poor thing,” one assistant said, as thick, wiry tufts of reindeer fur drifted down to the floor. “She’s going to need a sweater.”

As far as anyone can tell, Willow will go down in history as the first of her kind to undergo this knee surgery. McCarthy says he tried to find other such cases in the scientific literature, but came up blank. Surgeons at Cummings once performed the same procedure successfully on an alpaca, an animal about the same weight as Willow. McCarthy expected Willow’s procedure to go equally as well.

An hour and ten minutes later, his prediction was confirmed. “I have zero complaints,” McCarthy said. “It went great.”

By one o’clock, the team had loaded their antlered patient back into her hay-filled trailer. Willow was awake, alert and standing, though keeping weight off her newly repaired leg.

“She seems a little ouchie,” says Susan Bryant, a veterinary technician manager at Tufts, “so we’re going to get her another dose of [painkiller].”

Baitchman and Sullivan-Taylor transported Willow to the hospital at the Franklin Park Zoo in Boston to recover. Franklin Park and Stone zoos are operated and managed by the nonprofit Zoo New England. The morning after the procedure, zoo officials reported Willow was doing well.

Though her prognosis is excellent—McCarthy thinks she won’t even have a limp once she’s healed—Willow definitely won’t be guiding Santa’s sleigh this Christmas Eve. Her knee should be good as new in about six weeks, as long as she stays off the leg as much as possible. “She will be able to put pressure on in it, but I would love it if she didn’t,” says McCarthy. “If we can get her through a few weeks without damaging the repair, she’ll be fine.”