What’s the right formula for a successful weight-loss program on the job? 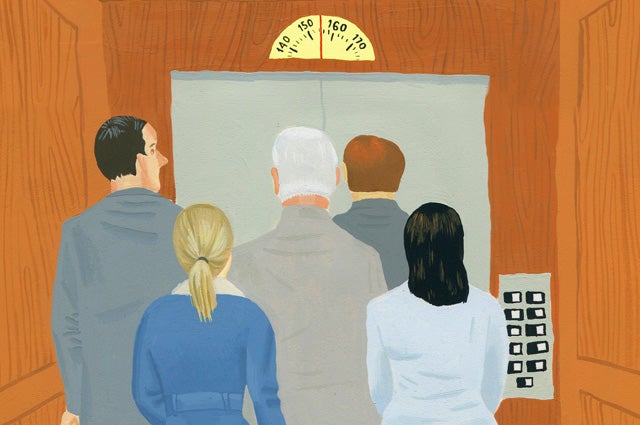 Michael was athletic as a kid. As an adult, he biked, skied and hiked. “I was very skinny all my life until I got married,” he says. “And then I just...exploded,” packing an extra 60 pounds onto his 5-foot-9-inch frame. He tried cutting out soft drinks, drinking a lot of water, eating more fruits and vegetables. But, he says, “whatever I did didn’t make much difference.”

So when he spotted a notice at his company seeking subjects for a Tufts research study on weight loss, the 55-year-old software project leader was intrigued.

In the months before the notice appeared, Susan B. Roberts, director of the Energy Metabolism Laboratory at the Jean Mayer USDA Human Nutrition Research Center on Aging (HNRCA) at Tufts, had been wrestling with a puzzle: Why had attempts to help people lose weight in the workplace failed so miserably?

The solution, if she could find it, potentially would have high stakes. The Centers for Disease Control and Prevention had labeled more than a third of U.S. adults obese and predicted 42 percent would be obese by 2030, contributing to premature death, disease and skyrocketing health-care costs.

In 2008, the American Journal of Health Promotion published a review of worksite-based weight-loss program studies. It identified more than 1,000 conducted between 1995 and 2006, advocating everything from substituting meal-replacement beverages for two meals a day to setting personalized goals to maintaining activity logs.

Focusing on 11 of the most relevant studies, authors Michael Benedict and David Arterburn concluded that while worksite-based weight-loss programs had resulted in “modest, short improvements,” long-term results were inconclusive. Worse, some programs failed to help workers achieve the 5- to 10-percent reduction in body mass needed to improve their health—even to prevent them from gaining weight. The review did find that interventions that included face-to-face contact more than once a month appeared to be more successful.

With this in mind, Roberts arranged for four Boston-area companies—including Michael’s firm, which happens to aggregate health and lifestyle data for the insurance industry—to invite employees to join a new science-based weight-loss program. Michael and more than 30 of his coworkers signed on to spend six months reinventing their relationship with food, with the help of Roberts and a research team from her laboratory.

For the health-conscious eater, a day at the average workplace can serve up a minefield of temptations: candy on the receptionist’s desk, doughnuts and homemade brownies in the communal lunchroom, pizza and chips or restaurant meals served at lunch meetings.

Yet workplaces should be, “in theory, amazing places to transform Americans’ health,” Roberts says. Most employed adults spend half their waking hours at work. As public health specialists wrote in the American Journal of Health Promotion, “worksites provide rich opportunities for educational, behavioral, environmental and economic strategies to improve nutrition and physical activity behaviors.”

In addition, employee social networks—the proverbial gathering around the water cooler—could make for a built-in coworker support system. “If you can create a culture of health at the worksite,” Roberts says, you’ve reached a captive audience with a targeted message. Yet apparently, no one had hit upon an intervention that leveraged all these things.

Growing up in England, “I was the fattest kid in my school,” says Roberts, who once worked as a French bistro chef and gained 55 pounds in her 30s after a difficult pregnancy. “I’ve seen it and been there.” Now slender, Roberts has managed to keep the weight off for almost two decades without, she says, giving up the “wonderful pleasures of food, comfort food and all the rest.”

Roberts has more than an inspiring story to offer. In creating her workplace pilot program, she drew heavily on the tenets of her 2008 book The Instinct Diet (later re-released as The “I” Diet). The book was the culmination of her 17 years of research into dieting, cravings, metabolism and the brain’s role in food preferences.

At Michael’s company, 20 percent of the workforce filed into the conference room for the first session, reinforcing Roberts’ suspicion that people are not as apathetic about their waistlines as the growing obesity statistics indicate. “Fifty percent of Americans try to lose weight every year,” says Roberts, a professor at the Friedman School and an adjunct professor of psychiatry at Tufts School of Medicine. “People care a huge amount, but they can’t do it.”

Roberts’ approach recognizes that for much of human evolution, famine, not feast, was the norm. Our ancestors never anticipated the triple-bacon cheeseburger or deep-fried Twinkies, but Roberts maintains there are ways to avoid the intrinsic allure of calorie-dense foods.

Staying full with high-fiber, low-calorie items, such as legumes, the right kind of cereals and veggies, is key, she says, because nobody can ignore the Twinkies when they’re hungry. The team provided the study participants with recipes, menus and easy-to-follow strategies to stay full during life on the run.

There were also practical strategies—having lunch before a noon meeting at which pizza will be served, for instance, and taking an alternate route to the mailroom to avoid that candy bowl.

Roberts relies on the techniques herself. Within easy reach of her desk in her office on the 13th floor of the HNRCA in Boston are an apple, a small container of milk and a liter bottle of water. From behind a cabinet, she produces a box of high-fiber cereal. “We always have some fiber handy,” Batra says, laughing.

In all, 133 people at the four companies participated in two consecutive six-month studies. “People who were participating were seeing results, and that affected others,” says Kevin, a vice president of human resources. “Word was spreading like wildfire. People were changing their grocery-shopping habits, their restaurant-eating habits. It was changing the way people were viewing food.” Reports started trickling in about improved blood glucose levels and lower blood pressure.

“People were seeing a direct impact,” Kevin says. “We were getting healthier.”

Leslie, a corporate communications and wellness coordinator, said she lost 30 pounds and is now at her lowest weight since college. She no longer takes blood pressure and cholesterol medication; she’s no longer at risk for diabetes. Michael lost 40 pounds in part by ditching a regular Friday pizza night for homemade soups. Kevin, who is 6-foot-2, went from 250 to 210 pounds. He stopped buying fast-food muffins on his way to work, eats yogurt and fiber cereal for breakfast and brings his own lunch instead of eating out or in the company cafeteria. He keeps more fruits and vegetables, and less ice cream, in his refrigerator at home.

Most of the participants had signed on “not as the first step, but the tenth,” Roberts says. “Everyone who came to us had already dieted multiple ways. They’d tried something in a magazine, had a sister who knew something that worked, bought supplements at the drugstore.

“Anybody who is clinically obese has been on at least 10 to 15 diets and has a reservoir of failure behind them,” she says. “They don’t really believe they can do it. A good program has to deal with all of the issues” people bring to the table. It’s key, Roberts says, to “instill a sense of hope. I absolutely believe it is possible for anyone” to lose weight.

Some dieters learned that in addition to their waistlines, their brains changed. Using brain scans, the researchers found that participants’ brains responded differently to images of high-calorie and low-calorie foods before and after the program—“evidence that dietary and behavioral intervention for weight loss can lead to changes in activation in regions of the brain associated with food reward,” says Salinardi, whose doctoral dissertation examined the effectiveness of this workplace diet and its influence on the brain.

When the pilot study ended last year, some participants wept. “They weren’t ready for us to leave,” Roberts says. “When I see a future, it’s not [dietitians] zipping in for six months and saying goodbye. I see this as a permanent feature of the workplace: If someone gains five pounds, they go back in and catch it quickly. Many people can be very successful, and some of those just need the accountability and support of a long-term program.”

Roberts and Das are now seeking funding to expand the study to 16 worksites and include a variety of workplaces in the mix. Among their questions going forward: Could these programs one day pay for themselves with savings in a company’s annual health-care expenses? Considering that obesity is estimated to cost U.S. companies $13 billion per year, Roberts believes the answer is yes.

This article first appeared in the Winter 2013 issue of Tufts Nutrition magazine.

Deborah Halber is a freelance writer in Lexington, Mass.