Record Applications for Undergraduate Class of 2017

With a soaring number of aspiring Jumbos, the acceptance rate will fall below 20 percent for the first time 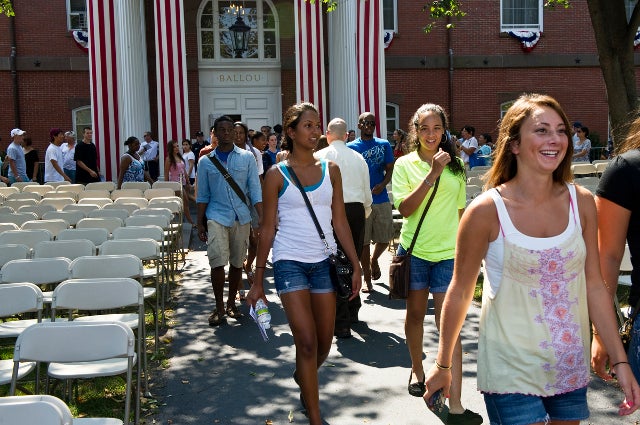 With 18,167 applications—and counting—flowing into Bendetson Hall, undergraduate admissions officials say the Class of 2017 will be the university’s most selective ever. In a historic moment for Tufts, the acceptance rate for undergraduates in an incoming class will fall below 20 percent for the first time.

The number of applicants represents an 11 percent increase over last year and Tufts’ second record in the last three years, according to Lee Coffin, dean of undergraduate admissions. “It’s exciting to see our recruitment cycle concluding with a pool like this one,” he says.

Particularly significant is the surge in applicants to the School of Engineering. With more than 3,177 prospective students seeking admission—the first time that number has topped 3,000—it marks a 15 percent increase, the school’s seventh consecutive record pool, Coffin says. Engineering applications have soared 75 percent over the past decade.

That growth, says Coffin, has been fueled by a close partnership between the engineering faculty and deans around recruitment efforts and related programming. “There’s also a generally strong national market for what is perceived as a practical degree like engineering in a down economy,” Coffin adds.

The record number of students who have applied via Tufts’ early decision option is noteworthy as well. Applications through that binding option have jumped 17 percent over last year’s record pool, indicating that more students are declaring Tufts as their first choice. Coffin expects 40 to 45 percent of next year’s class will come from early decision candidates when those decisions are finalized in February.

Also record-breaking is the number of applications from international students, making them the largest group in the pool for the second year in a row. Domestically, candidates from California are up 20 percent, which makes that state the second-largest source of U.S. applicants, after Massachusetts. “Our sustained growth on the West Coast has been a strategic goal for us,” Coffin says, noting that demographic trends demand heightened visibility for Tufts in this fast-growing part of the country. “The admissions staff sometimes jokes that we might become UC-Medford,” he notes.

The increased number of candidates seeking to attend Tufts comes despite a national decline in the number of college-age people. “I’m attributing the increase to our new website and communications plan,” says Coffin. “This is the first class to be recruited on that innovative new platform.” The redesigned undergraduate admissions site debuted in November 2011 and has attracted more than a half million visitors since then.

“The student and admission officer blogs, in particular, have proven to be a huge attraction for prospective students and parents,” Coffin says, noting that visitors like their transparent, conversational style infused with humor. “We celebrate excellence at Tufts with a breezy, playful tone that underscores Tufts’ down-to-earth aura, and that’s clearly been a winning strategy.”

Admissions officials are continuing to process the approximately 200 paper submissions before the final number can be tallied.