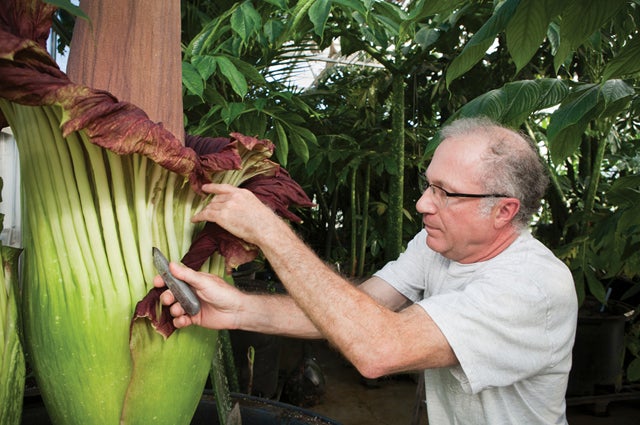 It’s hard to predict when an Amorphophallus titanum will make its move. It could take a couple years; then again, it could be decades. But it is almost always—appropriately—at night. Then the single, giant bloom, which can tower over a full-grown man, summons the energy it has stored from the sun over many months, unfurls its blood-red single petal and sends wafting the unmistakable stench of death.

Some have likened the smell to dog vomit, mashed-up old fish or rotten sauerkraut. Louis Ricciardiello, D78, DG82, an oral surgeon in Gilford, N.H., who has raised hundreds of the so-called “corpse flowers,” shakes his head. “It smells like decaying flesh, like a dead animal,” he says with finality. The odor does have a purpose: to attract beetles, bees and other carrion-loving insects to pollinate the plant. The corpse flower’s motive is less gruesome than that of a Venus fly trap, despite its macabre name.

Ricciardiello started raising these rare and spectacular flowers 10 years ago. He had been growing orchids since 1984 and was looking for something a little more adventuresome. In scanning horticulture books and websites, he read about the corpse flower, which grows wild only in Sumatra and was notorious for being hard to cultivate, even at botanical gardens.

He was drawn to the flower’s weirdness. But more important, “I liked the challenge of seeing if I could make it grow,” says the shy but quick-to-smile 59-year-old.

After some patient searching, he managed to purchase a dozen almond-sized seeds from a bloom in Wisconsin. Adding to the mystery of the flower was that there was not that much solid information out there about how to care for it. Even with the 8,000 feet of greenhouse space he had built to raise orchids—featuring computer-controlled temperature and humidity and shades that respond to signals from a weather station on the roof—Ricciardiello faced a good deal of trial and error.

Some experts said conditions had to perfectly mimic Sumatra, where the temperature rarely strays from 80 degrees. That would be prohibitively expensive for Ricciardiello’s oil-heated greenhouses on cold New Hampshire nights.

“So I picked 65 degrees, and it has worked out OK,” he says, with typical understatement. 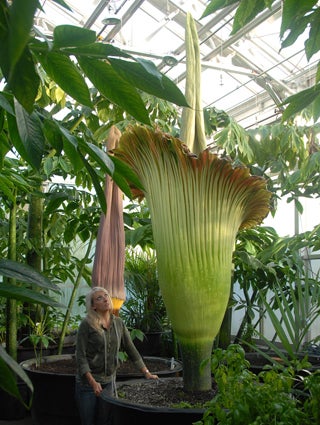 Michelina Coppolino, Louis Ricciardiello’s niece, admires the record-setting corpse flower that measured more than 10 feet, 2 inches from base to tip.
Indeed, from that handful of seeds he now has 300 plants in various stages of growth. When they are not preparing to bloom, the plants look like trees, with smooth green trunks and thick leaves. Some reach to the ceiling of the greenhouse. As Ricciardiello walks through the lush grove, a heavy mist jets from the ceiling, drenching him like a head of lettuce in a grocery store produce section. He doesn’t seem to notice it or the water he wades through on the floor. He just cleaned, he says, but with 90 to 95 percent humidity, the place will be covered with algae again in a few days.

Every four or five months, the treelike foliage dies off, and the plant looks like little more than a pot of dirt. But beneath the soil, the plant’s tuber is working. “During each of these cycles, those bulbs are getting larger and larger,” he says. “That bulb is storing energy. And one day, if it has enough energy, it will flower.”

He maintains most of the plants himself, working 20 hours a week and hand-watering all 300 of his macabre charges. He has a few men he calls in when he has to move the largest tubers, which can weigh hundreds of pounds, and their enormous pots, which can measure four feet in diameter. Ricciardiello shrugs off a tree-sized plant that has fallen over, its huge pot spilling soil onto the floor. It will go dormant again soon, he says, making it easier to handle.

When a plant decides it is time to flower, it sends up a chimney-like tube surrounded by what looks like a single petal, called a spathe, green on the outside and deep crimson inside. “In England, when the Kew Gardens were first opened up, women were not allowed to view the flower,” Ricciardiello says. After all, its scientific name translates roughly to “giant, misshapen penis.”

The first of Ricciardiello’s plants bloomed in 2006. He put it on display at the town fire station to raise money for local charities, including a program that provides reduced-price dental care for those in need. Some 3,000 people came—half to see it, half just to smell it.

To release the smell, the flower first needs to raise its temperature—one was documented to reach 96 degrees. That allows it to volatize the sulfur compounds that produce the nasty odor. The heat also causes the scent to rise so it can better travel through the rainforest, attracting those desirable pollinating insects. The bloom lasts only two or three days.

The fine print is that although the bloom looks like a hibiscus that a Hawaiian giantess might tuck behind her ear, the plant’s true flowers, of which there are hundreds, are actually inside the base of the tube. Still, the corpse flower takes the prize for tallest bloom in the world, because “all the units work together to accomplish its purpose of pollination,” Ricciardiello explains.

One for the Record Books

He knows something about records. In 2010, the Guinness Book of World Records recognized one of his blooms as the tallest corpse flower ever recorded, at 10 feet, 2.25 inches.

He’s also been able to clear up a few misconceptions about the plant. Ten years ago, he read repeatedly that the plant would die after flowering, but he has had encores. “Others will say it takes 10 years to bloom; that’s not true,” he says. “They will bloom every two years, every three years.” They also tend to bloom in clusters: last spring, he had about 30 blooming at once. (And yes, you do get used to the smell after a while.)

He’s disproved the claim that corpse flowers need to be handled like soufflés. They are not nearly as persnickety as some orchids. When one plant looked ready, he uprooted the tuber, put it in a manageable pot and transported it for display to a local high school, where it bloomed happily in one of the bathrooms.

The plants have been so fruitful, in fact, that Ricciardiello is trying to divest a bit. He donated one to the Franklin Park Zoo in Boston, where more than 11,900 visitors came to see it when it bloomed last spring. He gave two to the Niagara Parks Commission; they are believed to be the first in Canada. A botanical garden in Beijing owns two 150-pound tubers Ricciardiello raised. “They are like rock stars in China,” he notes.

But that is as close as he comes to bragging. As he moves through the greenhouses, it becomes clear the self-effacing botanist would rather talk about plants than himself. One former neighbor says she went through some effort just to get him to look up at her whenever they passed on the street. She succeeded, however, and they’ve been married five years now.

Not that he doesn’t have a sense of drama, especially when it comes to nature. His corpse flowers share space with a Madagascar palm, which if cut, will drip out a couple gallons of water in an emergency, and an Australian grass tree, blackened by wildfires in its native land, that can serve as a compass, as it only blooms facing north. He used to raise giant pumpkins.

His latest obsession is remarkable geology, for which he is considering going back to school. He recently returned from Iceland, where he walked across lava fields and was lowered 400 feet into the magma chamber of a volcano.

So it’s a safe bet Ricciardiello’s greenhouses will never be filled with roses, however sweet they may smell. He points to a Dorstenia gigas, a Dr. Seuss-like succulent that grows wild only on one small island in the Indian Ocean. “I like something like this,” he says, “something unusual.”