Andrew Kaplan, V90, establishes scholarship with the hope that future veterinarians will take on the problem of pet overpopulation 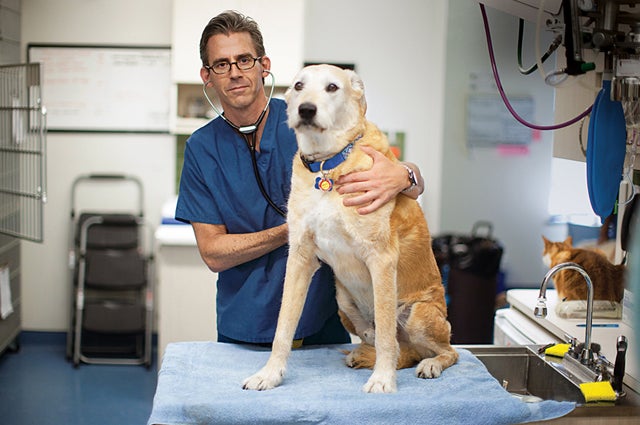 It’s been more than 20 years since Andrew Kaplan graduated from the Cummings School of Veterinary Medicine, but he has not forgotten how one administrator, Barbara Berman, helped him secure the financial aid he needed to pay his tuition and make ends meet.

That support, he says, and the superb education he received, helped him achieve the high standards he’s set for his professional and personal success. Kaplan, V90, runs his own practice, City Veterinary Care, on New York’s Upper West Side, which New York magazine named the “best private veterinary practice in New York City” in 2002 and 2006. He founded the Toby Project, which aims to make New York City a no-kill community by offering free and low-cost spay and neuter services for low-income pet owners and feral cats.

So what makes this civic-minded vet tick? “Passion,” he responds. “I love what I do on a daily basis, so I’m grateful that Tufts took a chance on me.” When he learned that financial aid was a major priority for the Cummings School, he didn’t hesitate, establishing the Dr. Andrew Kaplan Annual Scholarship, which will give preference to a fourth-year student with an interest in shelter medicine. The first recipient was Matt Gordon, V12.

“I was happy to step up,” Kaplan says. “And when I learned that Barbara [now assistant dean of student affairs] was on the selection committee for the scholarship, everything came full circle.”

The gift is an extension of his personal philosophy: “When an animal comes through my door, regardless of financial backing, I am going to heal it,” he says. “In life we only truly possess two things: our health and our relationships. To have been given the skill to protect an animal’s health means I have to answer whenever called upon. Preserving life is my religion and my practice, my place of worship. And that is why, in addition to caring for people’s pets, we serve many rescue organizations with pro-bono veterinary care, fix the broken wings of pigeons, help mice out of glue traps. We do what we have to do to help.”

Kaplan hopes that recipients of his scholarship will be inspired by the Toby Project, which aims to end pet overpopulation and the euthanasia of thousands of dogs and cats in New York City animal shelters each year. He founded the nonprofit after adopting a tail-thumping mixed-breed dog, which he named Toby, that he met by chance at a “mutt show,” staged to promote shelter dog adoptions.

He was baffled by a sign on the dog’s cage that indicated the animal was aggressive. He checked up on the dog the next day at the municipal animal shelter and was alarmed to learn that because he was deemed unadoptable, he would be killed in a matter of hours. He pleaded the dog’s case to the shelter behaviorist and brought Toby home.

“His case was an eye-opener,” Kaplan says. “I thought of the millions of other animals out there like him. I realized that I wanted the legacy of my career to be ending the biggest killer of dogs and cats in this country—overpopulation. For decades, we’ve been trying to solve shelter killing by adopting out as many dogs and cats as we can and killing the rest, and for decades we’ve been failing,” he says. “But we can put our foot down with an extremely simple solution: stop breeding dogs and cats now, shut down the puppy mills and adopt responsibly so we can get this problem under control.”

As he learns more about the Cummings School’s program in shelter medicine, established in 2006, he is encouraged that perhaps future Tufts veterinarians will help address the overpopulation issue.

To these students, he offers this advice: “Stick tight to what you want your reality to be. One of the things you will hear is that a veterinary clinic is a business, and if your clients can’t pay you, you have to make some unfortunate decisions. I say you can challenge that. I do every day, and I love my career because of it.”

This article first appeared in the Winter 2013 issue of Tufts Veterinary Medicine magazine.