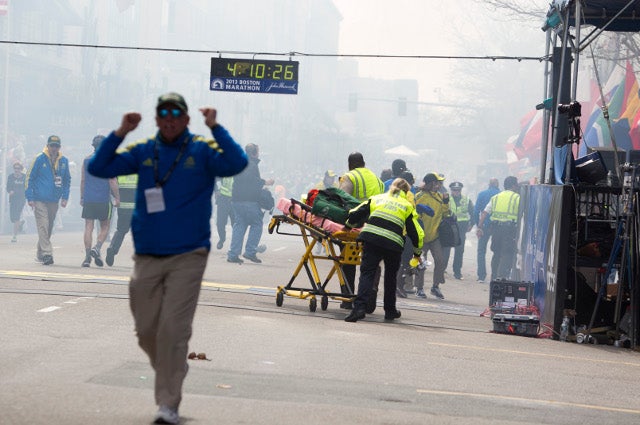 It was supposed to be the perfect day.

As a staff photographer for Tufts University, I was assigned to cover the Boston Marathon as our 100-plus-member charity team capped off months of training and fundraising by crossing the finish line on Boylston Street. Stationed about 50 feet from the finish, my job was to make pictures of our runners as they were greeted by the team’s coach, Don Megerle. It’s been one of my favorite assignments every year—there’s so much joy, happiness and triumph in every one of those photos.

What happened on Monday is not something you mentally prepare for.

The first blast occurred less than a minute after I had photographed a Tufts runner crossing the finish. There was some confusion as to what had happened. I thought it was a cannon, much like we hear every Fourth of July at the Boston Pops concert on the Esplanade. No one seemed quite sure what had happened.

Then the second blast went off, farther down Boylston Street. Pandemonium erupted as spectators knocked over the crowd-control barriers and scattered. After running back toward the front of the Boston Public Library with Coach Megerle and another member of my photo team, I saw Stuart Cahill, a photographer for the Boston Herald, run toward the site of the first blast.

I turned and told Coach I had to go, and followed Cahill. I made a few pictures of the injured emerging from the smoke in wheelchairs. I couldn’t see much through the haze, so I ran up the photo bridge, suspended above the finish line, to get a better view.

At heart, I am a photojournalist, having worked for newspapers and wire services for the better part of the last 10 years. We often ask ourselves how we would react in a tough situation, because invariably, we end up covering fires, shootings and other tragedies. This was different, though, and I had no idea what I would see from the top of the bridge.

Right away I knew it was bad. I saw people with horrendous injuries, one in particular that was difficult for me to look at, or photograph. The man, later identified as Jeff Bauman, had lost both legs below the knee and was being carted away in a wheelchair as the well-known peace activist Carlos Arredondo sprinted beside him, applying tourniquets to both limbs.

The response from emergency personnel and bystanders was impressive, a description that even now seems meager, given what they did. Those who ran toward the blast scene, without giving thought to their own safety, easily outnumbered the victims, three to one.

Every one of those people is my hero.

Seeing Cahill, AP’s Charlie Krupa—whose photo of Bauman was on front pages around the world on Tuesday—and the Boston Globe’s David L. Ryan work amid the chaos to make sure the horror of this event was captured and remembered was incredible. The work of the Globe’s John Tlumacki, who was on the ground and whose account is now in Time magazine, absolutely needs to be seen.

After I was asked to evacuate the bridge, I texted my mom, who lives in Massachusetts, that I was OK. I also sent out a two-word Tweet—“I’m OK.” I contacted Bloomberg News, and the photo editor, Graham Morrison, encouraged me to find a place to sit down, regain my composure and transmit the images I had captured. I was able to get an Internet connection in the Prudential Center.

My mom, who had not received my text because the cell towers were overloaded, learned I was OK because my sister saw my photos on the Washington Post news site and called her. I ran into one of my reporter friends who had run the marathon. He was diverted from the course and ended up at the Pru. I gave him my last bottle of water, and showed him my photos.

I sent more emails and made more social media posts to let people know I was OK, and then headed back toward the scene, making some more photos along the way. My friend Dominick Reuter found me on the street and stuck with me.

Monday night was strange. I didn’t know how to feel. It was like a mix of sadness and anger, but mostly numbness. I made sure I was with friends. I made calls to friends and family. I got into bed, but didn’t sleep—all I could think about was the image of Bauman and his injuries.

By morning, I had come down from the adrenaline high and broke down in between more phone calls from friends and family. I didn’t know what to do, and pacing around my house wasn’t helping. So I did the only thing I knew how to do and went back down to the scene to make some more pictures and try to process what happened.

That helped. I ran into other photojournalists doing the same thing. I was pretty much useless as a photographer, but seeing familiar faces was comforting. The outpouring of support from the photojournalism community has been incredible, from people I’ve known for years to someone I just met on Monday. I can’t express enough how grateful I am to have such supportive brothers and sisters always in my corner.

There were a surprising number of runners jogging around the security perimeter on Tuesday—seemingly in defiance of what had happened the day before. Some might even say it was a typical response for Bostonians.

Tuesday night I attended President Anthony Monaco’s reception for the Tufts Marathon Team. It was a relief to see everyone safe and accounted for. I broke down again as I apologized to Coach Megerle for leaving him at the finish line. I also tracked down the last runner I photographed before the blast, Sackler neuroscience student Micaella Panessiti, and gave her a hug. I had never been so happy to see someone I hadn’t yet met.

Around 9 p.m. Tuesday, I saw a familiar face on the New York Times website. Jeff Bauman, whose horrific injuries had kept me awake the night before, had survived and was stable in a local hospital. Learning that he had made it lifted the heavy cloud that had engulfed me. His recovery will no doubt be long and difficult, but he is still with us.

The day before the marathon, I had worked on a story for the Boston Herald about an Army captain, Jake Murphy, who had lost both of his legs to an IED in Afghanistan in July 2011. He was preparing to compete in the Boston Marathon’s handcycle division after a long rehab. I hope that Bauman’s recovery goes well, and that maybe they could get in touch with each other at some point.

In retrospect, what struck me most was not the devastation and the chaos, but the fact that so many people ran toward the danger to help. It is a recurring thread in everyone’s retelling.

Boston is my hometown. I have no doubt the people of this city can overcome this. Seeing so many people out running downtown the morning after, I know we’re on our way.

Kelvin Ma can be reached at kelvin.ma@tufts.edu.