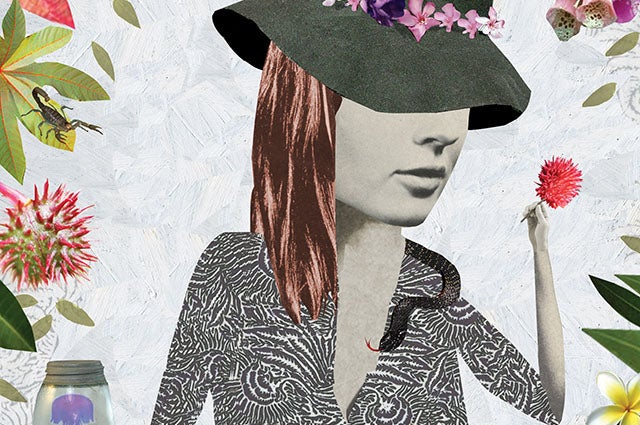 Lily Robinson—stiletto-heeled, raven-haired, a devotee of Armani, deadly plants and a certain sea snail that spears its unsuspecting prey with a harpoonlike venomous tooth—is heading out, a hint of glitter on her décolletage.

Robinson’s target this evening is a professor with an unruly gray mane who has created an encryption-proof method of digital communication. Intelligence operatives have learned of his intent to share his revolutionary but potentially insidious discovery with America’s political enemies.

At a catered affair, Robinson, the mad professor and the other guests dine on mussels in a leek, celery, onion, garlic and parsley broth, followed by a watercress and endive salad. The entree is wild grilled salmon with tarragon and rosemary. Robinson surreptitiously digs a plastic vial out of her Prada clutch. As waiters clear the last of the chocolate mousse and herbal tea, the traitorous academic doubles over, drooling, gasping, vomiting and wracked by seizures.

He’s dead before help arrives. Robinson touches up her eye shadow before waltzing out the door in crystal-bedecked Jimmy Choos.

Poison’s aura of intrigue—as well as the cavalierly evil array of natural toxins found in flora and fauna—has long captivated Barbarajean (BJ) Magnani, pathologist-in-chief at Tufts Medical Center. The assassin Lily Robinson exists only in her imagination, but Magnani, professor and associate chair of pathology at Tufts University School of Medicine and a forensics expert, is all about educating medical professionals, Hollywood producers, the media and the public on poisons’ very real dangers.

Poisoning deaths have shaped history, politics, literature, love and war for millennia. First-century Romans routinely poisoned emperors; the Borgias were known for eradicating their enemies at Renaissance dinner parties. The Victorian era spawned some of the world’s most notorious poisoners—and launched the field of toxicology.

Poison is the most devious of murder weapons, noted the 19th-century Scottish toxicologist and physician Robert Christison, because only the most “dexterous toxicologist and skillful physician” can outwit a poisoner who has found an “exact imitation of some natural cause.”

It was that darker side of nature that hooked Magnani. Collecting samples of algae and other marine life in Long Island Sound as a graduate student at SUNY Stony Brook, she became enthralled with the creatures’ extravagant defense mechanisms—one-celled plants that generated a potentially lethal neurotoxin and jellyfish that could kill with a single sting. Onshore, there were scorpions, venomous snakes, poison dart frogs and dozens of varieties of noxious plants. “These are all fabulous toxins,” she says. “I think it’s fascinating that nature came up with a way to make organisms themselves resistant to toxins that can kill other organisms.”

After exploring the role of environmental pollutants for her master’s degree and then the metabolic pathways of tumor cells for her Ph.D., Magnani earned her M.D. from Boston University. Living for a time in rural Sherborn, Mass., she indulged her black thumb by growing deadly nightshade, monkshood and foxglove within the protective confines of a 12-foot-tall chain-link fence.

In her office at the medical center, Magnani shows a visitor a gift from a colleague—an armful of branches studded with golf-ball–sized seedpods dappled with evil-looking spikes. She pries open one of the prickly purple pods to reveal a plump, beige nugget etched with a variegated pattern of delicate dark brown swirls. This, she declares, is a castor bean—considered one of the world’s most lethal plants. As little as 0.5 mg of its naturally occurring protein, ricin, can kill an adult; the Bulgarian secret police reportedly murdered dissident Georgi Markov by using a modified umbrella to inject a ricin-laced pellet into his leg.

Even though Magnani assures me that swallowing the entire bean—as long as I didn’t chew it—wouldn’t produce any ill effects, I keep my distance, especially when she notes that the tear-shaped bean looks like an engorged tick, which it does. She then picks carefully at a needlelike thorn that has become embedded in her finger.

When the editor-in-chief of the Journal of Clinical Chemistry approached Magnani in 2009 about writing a series about the properties of esoteric poisons, she dreamed up Lily Robinson. Like Magnani, Lily wears the latest Manolo Blahniks and Jimmy Choos. For the first year, Magnani wrote the pieces anonymously, identified only as “a prominent clinical chemist/toxicologist,” although she laughs that some of her colleagues were on to her because of the shoes. (Magnani claimed the black Donald Pliner pumps with three-inch heels she wore the day I met her were unusually tame, but she also sported a stylish black dress under a white lab coat embroidered with her name and the Tufts Medical Center logo.)

Each installment of her journal series described a murder, and amateur detective/chemists around the world sent in their best guesses about which poison was responsible for the untimely demise and then awaited the next issue, when she would reveal the poison, its clinical properties and analytical means of detection. “It was so much fun to read all the answers,” Magnani says. Eight of the poison stories were published last year in the book Lily Robinson and the Art of Secret Poisoning (nVision Press), and she’s working on a novel based on her fashionista assassin.

Magnani consulted for the producers of the now-defunct TV drama Crossing Jordan, which featured a smart, sexy, crime-solving forensic pathologist employed by the Massachusetts chief medical examiner’s office. “I tried to be very fussy about accuracy,” Magnani says. She protested when the show’s lead character, Dr. Jordan Cavannaugh, placed a cup of coffee next to her microscope, or when toxicology reports that should look like rows of typewritten figures appeared as colorful graphs.

In one of her poison stories, “Lily Robinson and Ready, on the Set, Go,” Magnani has her alter ego observe a TV shoot in Hollywood. Robinson knew that real laboratories didn’t have large plasma screens, expensive analytical equipment simulating data or the “multiple Florence flasks and beakers perfectly aligned on shelves brimming with brightly colored liquids” that she saw on the set. She was appalled that the TV lab allowed food on the same bench as autopsy material. In the end, the producer informed Robinson that TV forensics is about entertainment, not science or real life.

While Magnani believes the CSI franchise and similar TV crime dramas have raised awareness about science and laboratory medicine—“a lot of people are interested now in working in forensic labs, and I think that’s great”—the small-screen shows also have created unrealistic expectations. When Magnani once testified in court about lab results, “jurors asked questions that were clearly coming from television and not relevant to the case at hand,” she says. “You worry that the public is being taught by television, and television is not always accurate.”

Two months after Michael Jackson died in 2009, the Los Angeles coroner, based on a toxicology report still considered preliminary, tied Jackson’s death to the powerful anesthetic propofol, although the pop icon’s bloodstream contained traces of a litany of prescription drugs. Three years later, the coroner took more than a month to report that singer Whitney Houston had cocaine in her system after she was found submerged in a bathtub in a Beverly Hills hotel in February 2012. Many in the media questioned the delays.

At a press conference the American Association for Clinical Chemistry held in conjunction with its 2009 annual meeting in Chicago, following Jackson’s death, Magnani explained that done conscientiously and correctly, toxicology reports take time. At an autopsy, pathologists collect vials of heart blood, peripheral blood and tissue from the brain, liver and kidneys. An analyst performs an alcohol screening and a general immunoassay, which can detect such drugs as opiates or tranquilizers.

“Most death investigations screen for common drugs of abuse,” says Magnani, who uses case studies drawn from celebrity deaths (the actor Heath Ledger and singer-songwriter Janis Joplin, to name two) in her workshop presentations to the College of American Pathologists and other professional groups.

And that brings us to her latest public education campaign and what she calls toxicology’s latest challenge—the skyrocketing numbers of unintentional overdoses from prescription drugs, a problem she says has reached epidemic proportions. She offers this sobering statistic as evidence: In 2008, just as many emergency room visits stemmed from prescription or over-the-counter medications as illegal drugs. Of the 27,000-plus deaths from unintentional drug overdoses reported in the United States in 2007, approximately 12,000 were from opioid analgesics; heroin accounted for about 2,000 deaths and cocaine for some 5,000 fatalities.

In textbooks, professional meetings and grand rounds at Tufts and other hospitals, Magnani stresses that an estimated 50 million Americans experience chronic pain, despite the $100 billion spent annually on pain management and care. Addictive prescription drugs such as OxyContin or Vicodin, prescribed for everything from toothaches to postsurgery pain relief, are being abused by a wider spectrum of the population than teens looking for a high, she says, and many pain drugs have a high potential for misuse or abuse.

If a nondrug-related cause of death is to be investigated, “you’d have to have a suspicion or evidence that leads you in a specific direction,” Magnani says. “Someone might have been poisoned by anti-freeze, but that’s not something you’d normally test for. Then you’d go back and look for that in organs.”

If a drug test is positive, more tests are done to pinpoint the culprit. Autopsy supervisors review analysts’ findings and may request additional substantiation. Barring glitches or lengthy tests for hard-to-detect drugs, such as neuromuscular blockers, the process could take a couple of weeks or longer.

It’s in the Tea

How did the made-up Lily Robinson, whose initial career path mirrors Magnani’s—a toxicologist with graduate degrees, a medical degree and a university appointment—become an undercover agent ridding the world of undesirables? Lily’s not “an assassin at heart,” Magnani assures me.

As a young mother and Ph.D. student, Lily was collecting specimens of the poison dart frog in the Colombian rainforest when drug cartel thugs kidnapped and murdered her only child. U.S. government authorities, aware of Lily’s encyclopedic knowledge of toxins and poisons that create seemingly natural deaths, recruited her, taking advantage of “a mother’s sorrow and need for revenge,” Magnani wrote in the story “Lily Robinson and the Eyes Have It.”

“She’s not someone who wanted to do this,” Magnani says, “but she was called to service. She was vulnerable and able to mastermind death in a way no one could think was anything other than natural.” Magnani sounds distinctly admiring of her creation’s skills.

In the case of the evil professor who dropped dead at dinner, Robinson was banking on the coroner zeroing in on the shellfish on the menu. That summer, New England shellfish were contaminated with the algae known as red tide, which caused saxitoxin to become concentrated in clams, quahogs, mussels, scallops and oysters—all “filter feeders” that consume phytoplankton. A bad mussel could indeed have resulted in the professor’s demise.

But Robinson chose aconitine, the toxin produced by a purple-flowered perennial known as monkshood or devil’s helmet. Aconitine brings on symptoms that mimic shellfish poisoning—nausea, hypersalivation, vomiting, numbness, weakness in the extremities. Seizures and coma often follow. The heart skips beats or stops altogether. One of the most powerful plant-derived toxins, it can cause severe poisoning with only 0.2 milligrams, an amount all too easy for Robinson to slip undetected into the professor’s herbal tea.

This article first appeared in the Winter 2013 issue of Tufts Medicine magazine.

Deborah Halber, G96, is the author of The Skeleton Crew, coming from Simon & Schuster. The book tells the stories of amateur sleuths who use the Internet to match missing persons with unidentified human remains.