James Stavridis, F83, F84, is known as an inspirational leader and strategic thinker on international affairs 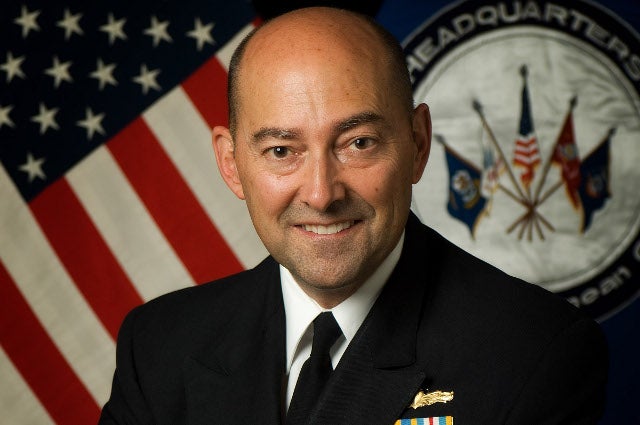 James Stavridis, F83, F84, the Navy admiral who is NATO’s top military commander and oversees all American forces under the U.S. European Command, has been selected for appointment as the dean of the Fletcher School at Tufts, the nation’s oldest graduate school of international affairs. Following his anticipated retirement from the Navy this summer, Stavridis will succeed Stephen W. Bosworth, who has led the school since 2001.

The New York Times has called Stavridis a “Renaissance admiral,” largely because this career Navy man has defined the 21st-century U.S. military as not built solely on might, but also on what is known as “smart power,” the creation of durable partnerships with friends and allies to achieve mutual goals of security, prosperity and peace.

“We are excellent at launching Tomahawk missiles; we need to get better at launching ideas,” said Stavridis, who is known as an inspirational leader and strategic thinker with a deep understanding of international affairs.

Stavridis, who earned a master of arts in law and diplomacy and a Ph.D. from the Fletcher School, will start his new job this summer.

He is the first naval officer to serve as American and NATO commander in Europe, where he is responsible for 120,000 coalition troops serving on three continents and at sea. The European Command encompasses 51 nations, stretching east from Spain and Portugal to the Middle East and into the Caucasus, the traditional boundary between Europe and Asia. He will step down from his military command later this spring, succeeded by Air Force Gen. Philip M. Breedlove.

Stavridis has had to navigate a diversity of geography, culture and economics in the region while negotiating such sensitive issues as the U.S. mission in Afghanistan, cyber-security, the protection of millions of Turkish citizens who live near the border with Syria from ballistic missile attacks, and piracy off the Horn of Africa.

“Admiral Stavridis has the rare combination of intellectual curiosity, social intelligence, humility, leadership skills and respect from others that has made him one of the great military and political leaders of his generation, and that will make him a spectacular Fletcher dean and a key member of the university leadership team,” said Tufts Provost and Senior Vice President David Harris in announcing the appointment.

Stavridis said, “I am honored to be selected to be the 12th dean of the Fletcher School, where I was lucky to earn my Ph.D. some years ago. I will focus on multinational, interagency, private-public and strategic communication approaches to international affairs, as I have through my career in the Navy.”

Before assuming his current command, Stavridis had been in charge of the U.S. Southern Command—a region comprising Central America, South America and the Caribbean—since 2006. Under his leadership, the U.S. provided counterinsurgency and counter-narcotics assistance to Colombia, preventing more than 650 tons of cocaine from arriving in this country.

A gifted communicator, Stavridis has embraced digital technology to engage a global audience about everything from the pressing issues of the day to what’s on his reading list. An admitted “huge consumer of social networks,” he has more than 13,000 followers on Twitter and more than 10,000 friends on Facebook, where he posts commentary as well as photos from his wide-ranging travels.

In the past month, the admiral has visited with wounded soldiers and state officials in Tbilisi, Georgia, and defense forces in Ireland; met with the prime minister and minister of defense in Greece while receiving a high national award; connected with Israeli senior leadership to discuss the Middle East peace process; and discussed key issues in Ankara, Turkey—as well as visited Thule Air Force Base, 800 miles north of the Arctic Circle.

He’s a frequent blogger at From the Bridge. Social media, Stavridis said, connects him with “a wonderfully broad group of people with whom I can share ideas and get fresh perspectives.”

Earlier in his naval career, Stavridis commanded the destroyer USS Barry during deployments to Haiti, Bosnia and the Persian Gulf; the destroyer won the Battenberg Cup as the top ship in the Atlantic Fleet. He received the Navy League’s John Paul Jones Award for Inspirational Leadership as commander of Destroyer Squadron 21, which deployed to the Persian Gulf in 1998. From 2002 to 2004, during Operation Iraqi Freedom and Operation Enduring Freedom, he led the Enterprise Carrier Strike Group, conducting combat operations in the Persian Gulf.

He also served as executive assistant to Navy Secretary Richard Danzig during the Clinton administration and as a senior military assistant to Defense Secretary Donald H. Rumsfeld during George W. Bush’s presidency.

Born into a military family, Stavridis spent part of his childhood in Greece while his father, a Marine officer, was posted to the U.S. Embassy in Athens. He earned his undergraduate degree in literature from the U.S. Naval Academy and is a graduate of the Naval War College and National War College.

He is the author of Partnership for the Americas: Western Hemisphere Strategy and U.S. Southern Command (National Defense University Press), a reflection on his tenure at the Southern Command, and four other books on leadership, maritime affairs and strategic innovation. A prolific writer, he’s published more than 100 articles.

Stavridis skims six newspapers every day, including El Pais and Le Figaro (he speaks French and Spanish and is studying Portuguese). He also reads The Economist, The New Yorker and The Atlantic. He likes historical fiction and aims to read a novel a week. He’s fond of poetry as well—“W.B. Yeats still amazes me with the freshness of his vision a century after much of his work was published”—and makes it a point to read poets from the countries to which he travels for his job. He has taught literature at the Naval Academy as well as a course on the literature of the sea at Tufts’ Experimental College.

Stavridis will lead a school that has expanded the scope of its teaching, research and global outreach during Bosworth’s tenure. Bosworth, the former ambassador to the Republic of Korea, will retire this summer. He increased the size of the Fletcher faculty and student body while securing the financial soundness of the school during a period of economic uncertainty.

“Dean Bosworth has been a consummate institution builder,” Tufts President Anthony P. Monaco said. “His vision has made an enduring impact on the education of professionals and scholars who seek to make a difference in solving the world’s challenges.”