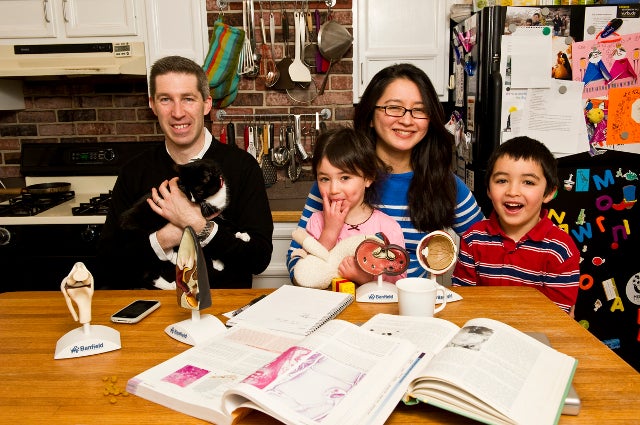 As the sun rises through the trees, Keiko Petrosky walks briskly toward Tufts’ Foster Hospital for Small Animals. A 34-year-old mother (her third child, a daughter, was born in April), Petrosky, V13, prepares to check in on her cancer patients. Her alertness belies the hour. It’s 7 a.m., but she’s been up since 5. “I don’t need an alarm clock,” she jokes. “If my cat doesn’t wake me up, my kids do.”

Going to veterinary school and raising a young family are each full-time jobs, but she’s taken on both, as she carves out a professional life at the nexus of veterinary medicine and human medical research.

Becoming a vet is a second career for Petrosky, who first trained and worked as a scientist. After obtaining a Ph.D. in biophysics from the University of California, San Francisco, in 2006, Petrosky and her husband, a fellow graduate student at UCSF, moved to Basel, Switzerland, home of the drug maker Novartis. There she helped to perfect a laboratory technique for testing the effects of a new osteoporosis drug on living tissue samples.

The job was exciting, but Petrosky found herself drawn to the work of the Novartis veterinarians. “Any time a medicine or drug is approved for humans or animals, it must first go through a veterinary pathology review. Veterinarians play an incredibly important role,” she says.

Petrosky, the scientist, understood the effects of a drug on a given protein or tissue. Still, she felt something was missing. The Novartis veterinarians understood how a medication affects the entire body.

“I wanted that,” she says. “I had the science, but I needed the medicine.”

After two years overseas, Petrosky and her husband moved back to the States, their infant son and adopted shelter cat in tow. “At that point it was either look for another lab job or start vet school,” says Petrosky. She took the plunge.

Being back in a classroom was a bit of a shock, she admits. Sometimes she would set her alarm for 3 a.m. to study while the rest of the family slept. Yet she quickly learned how to juggle schoolwork and family and put her laboratory experience to good use.

“Keiko has such enormous energy and organization. I was in awe of how she managed veterinary school with research projects and family,” says Barbara Davis, a former pathologist at Tufts who was her advisor on a research project on dog tumors, for which Petrosky received a Morris Animal Foundation Veterinary Student Scholarship.

Early on at the Cummings School, Petrosky found a small group of career-changers and students with young children who leaned on each other for support and shared creative studying strategies during lunch. “I learned to make up bedtime stories for my son about how the kidneys or heart worked,” she says.

She also benefited from an extremely supportive family. “My husband has been incredibly hands-on. My in-laws would take the kids overnight so I could study one or two nights a week for exams. And my mom lived with us two to three months out of the year.”

Between her first and second years, Petrosky took a year off for the birth of her second child. When she resumed classes, she got a boost from the American Association of University Women, which awarded her a $12,000 career-development grant to help pay for child care.

During clinical rotations in her final year of veterinary school, achieving a balance between her studies and family life was especially difficult. With 12-hour shifts required for some specialty rotations, “I didn’t see my kids for days,” she says.

While there have been plenty of sacrifices, Petrosky says it’s paying off. In September she will start a residency in veterinary pathology at the New England Primate Research Center at Harvard Medical School, where she will work on treatments for diseases that occur in animals and humans, including certain cancers.

Her son, now 5, and daughter, 3, “are starting to understand what Mommy does for a living,” says Petrosky. She admits one of her favorite parts of clinical rotations was watching her kids’ faces light up when she would show them cell phone pictures of a turtle, cow or dog she had helped heal.

“At the end of the day, those little things helped get me through,” she says, before disappearing through the Foster Hospital’s double doors for another 10-hour shift.