The Dark Side of Cheap Clothing

In countries like Bangladesh, strengthening labor laws is the best way to prevent exploitative working conditions 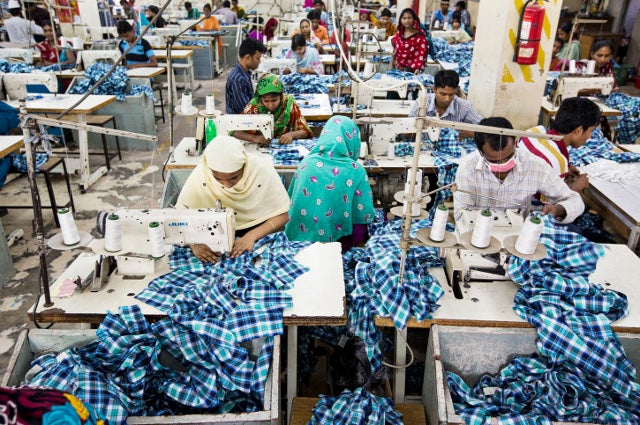 Chances are your favorite T-shirt and those jeans you scooped up at a bargain price might have been manufactured in Bangladesh, the world’s second largest exporter of clothes in the world, after China. But inexpensive clothing comes at a price for garment workers.

Bangladesh’s garment workers earn the lowest wages in the world, an average of 24 cents an hour. Their work is also fraught with danger. On April 24, a building collapse near Dhaka killed more than 1,100 workers, and on May 8, eight people died in a sweater factory fire not far away.

These events have led to an outcry about working conditions in Bangladesh and calls for such retailers as Joe Fresh, Benetton, Wal-Mart, Disney and H&M to ensure their clothing is being made in safe factories. When some retailers suggested they might move their operations to another country, the Bangladeshi government responded in alarm, saying an exit would ruin the economy.

Drusilla Brown, an associate professor of economics in the School of Arts and Sciences, has been studying international trade, labor standards and working conditions in apparel factories for more than a decade, and oversees Tufts’ monitoring and evaluation efforts in Haiti, Nicaragua, Jordan, Indonesia and Vietnam with Better Work, an organization that aims to monitor and improve working conditions around the world. Brown recently discussed the catastrophe in Bangladesh, saying it follows the pattern of other workplace tragedies.

Tufts Now: How important is the clothing industry in Bangladesh?

What happened in the factory that collapsed?

The Sohel Rana Plaza was originally permitted to construct a five-story building. However, the owner added three additional floors that were not approved for the building. The apparel factories had heavy machinery, mostly sewing machines. The factories also had generators, as a consequence of frequent disruptions of electricity. So there were three illegal floors, heavy equipment and many people: each of those floors had 1,000 people.

This is the not the first time we’ve wrestled with sweatshops. A comparable event occurred in 1911 in New York City in the Triangle Shirtwaist fire that killed 146 garment workers. Managers had locked the doors to the factory, and many people who could not escape jumped to their deaths from the top floors. The tragedy resulted in legislation to improve safety conditions. When a tragic event occurs, the crisis galvanizes public opinion.

What can be done to prevent workplace tragedies internationally?

The evidence is strong that protecting workers is principally a function of the government. Big multinational buyers and consumers can play a role in moving the process forward. However, until meaningful labor laws and an effective enforcement mechanism are implemented, we typically see only marginal improvements. It took labor law, labor inspections and international trade agreements to fundamentally improve working conditions in the United States and Europe.

How do the retailers react to these events?

The first reaction in cases like these is that big, multinational buyers deny responsibility. They say, “These are not our factories; we don’t own them, so we don’t have responsibility for working conditions.” This is not an argument that customers find particularly compelling. Typically, customers don’t care whether the multinational buyers own the factory or not; the companies need to act. Some companies make small contributions to organizations called “third party auditors” they think might help them repair their reputation. Wal-Mart recently said it would donate $1.6 million to help establish a health and safety academy in Bangladesh. It’s a trivial amount of money. Sometimes they develop their own compliance rules and try to work with local people to audit factories.

Is there any impact on the retailers?

When there were serious workplace problems in Nike vendor factories in Indonesia in the 1990s, Nike initially refused to accept responsibility and the company’s stock dropped 47 percent. That was the end of the denial strategy for Nike. So Nike created its own compliance division and invested in working with factories in its supply chain to develop best practices concerning labor management and compliance systems. Companies are very concerned about their reputation and what these events mean for that.

What can consumers do?

Consumers are very important. Their main role is to make retailers nervous that there will be a backlash. Disapproving consumers sometimes affect investor assessments of the value of the company. At that point, a firm will typically develop a remediation strategy.

Are there any companies making good efforts to improve working conditions?

Many are. Gap is a company that is willing to try everything. They have been significant supporters of Better Work. In recent years, Nike has also tried many different strategies, as has Adidas. On May 15, five firms agreed to support a plan to improve fire safety. These firms are H&M, Indetex, C&A, Primark and Tesco.

What can outside organizations do?

The International Labour Organization, a United Nations labor organization, sent a delegation to Bangladesh to assess options. The ILO will try to bring together the Bangladeshi government, unions and clothing manufacturers to collaboratively find a way forward.

But in order for the ILO to be able to help, the government needs to pass some laws allowing for freedom of association to form unions and for collective bargaining. The Bangladesh Parliament is expected to do that in June. But Bangladesh is more challenging than anywhere else the ILO has worked because of the tremendous size of its industry. The ILO is looking to add about 800 factory inspectors in Bangladesh. If properly trained and not corrupt, that will be a large enough force to make a difference.

We’ve been through this before, and I’m hopeful conditions can improve. At times it seems hopeless and horrible, but the conditions of work in Western Europe changed dramatically after labor laws were passed and international trade agreements were enacted at the end of the 19th century.

If you look at the United States from the Triangle fire forward, there were ups and downs, but conditions improved steadily. Where the ILO has a presence, it’s striking how much conditions can improve, even over a short period of time. The Tufts team collected data in Jordan, for example, where there were nasty allegations about sexual harassment in June 2011, and 18 months later there was a significant drop in the percent of workers raising sexual harassment as a concern in their factory.

The Better Factories Cambodia project was a pilot for Better Work, in which Cambodia agreed to ILO inspections in exchange for increased access to the U.S. apparel market. It was successful: work conditions improved, and Cambodia was able to hold on to market share without cutting wages, even when wages were falling around the world in the apparel sector. Because of pressure from other firms, Cambodian factory owners have remained compliant with international labor standards and Cambodian labor law.