The U.S. ambassador, a longtime social and political activist, will assume new role in January 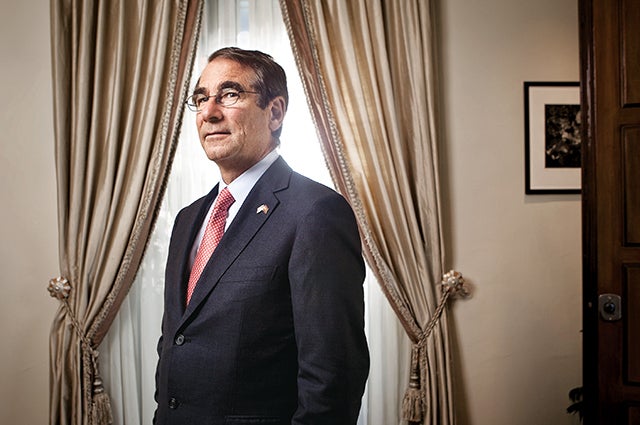 Alan D. Solomont, A70, A08P, the U.S. ambassador to Spain and Andorra and a lifelong social and political activist, has been appointed the Pierre and Pamela Omidyar Dean of the Jonathan M. Tisch College of Citizenship and Public Service at Tufts. He will succeed Nancy Wilson, who has led the college on an interim basis since founding dean Rob Hollister stepped down in 2011 after a decade in that role.

Prior to his posting to Madrid, Solomont chaired the bipartisan board of directors of the Corporation for National and Community Service, the federal agency that oversees such domestic service programs as AmeriCorps, Learn and Serve America, VISTA and Senior Corps. He was first appointed to the board by President Clinton in 2000, reappointed by President George W. Bush in 2007 and elected chair in 2009.

Like President Obama, who nominated him for the ambassadorship in the summer of 2009, Solomont as a young man worked as a community organizer, in the city of Lowell, Mass. He traces his interest in the problems of America’s cities to his mentor at Tufts, Antonia Chayes, the former dean of Jackson College, who taught urban studies in the political science department and served with her husband, Abram Chayes, in the Kennedy administration. To this day, Solomont said, she has been “an enormous influence on my intellectual growth.”

Throughout his career, Solomont has embraced the ability of political activism and public service to benefit society.

In announcing Solomont’s appointment, Provost and Senior Vice President David Harris noted that the new dean’s “commitment to active engagement in the world around him, his belief in the power of higher education and his strengths as a diplomat, entrepreneur and social activist will enable him to work with faculty, students, staff, alumni and friends to advance Tisch College from its highly successful formative years to a future as the unquestioned international academic leader in promoting active citizenship and civic engagement.”

Solomont will start his new job on January 2, 2014. “For me, returning to Tufts as the dean of Tisch College is coming home to an institution I love and that has meant so much to me and my family,” said Solomont, whose wife Susan earned an M.Ed. from Tufts in 1981; their daughter Becca received a B.A. in child development in 2008.

“I am excited to lead one of Tufts’ signature initiatives and to apply my passion for active citizenship and civic engagement to build on Tisch’s solid foundation and to propel it to new heights,” he said.

Against the backdrop of the war in Vietnam and the civil rights movement, the late 1960s marked “the beginning of student awakening” on college campuses across America, Solomont said in an interview for the Tufts Civil Rights Protests project, which documents the history of student activism on campus. He described his experiences with political activism at Tufts—from demonstrations against the war in Vietnam to the occupation of Ballou Hall to protest the lack of minority hiring on the Lewis Hall construction project—as the “building blocks of my lifelong commitment to active citizenship.”

After graduating from Tufts with a B.A. in political science and urban studies, Solomont made his first trip to Spain on a Thomas J. Watson Fellowship for postgraduate study and travel abroad.

Solomont spent much of his professional career in the health- and elder-care arenas. He built a network of elder-care facilities in New England as chair of Solomont Bailis Ventures. He invested in early-stage health-care companies and cofounded HouseWorks, a home-care company that helps seniors remain independent. He was also the founder and managing director of Angel Healthcare Investors.

A longtime leader in the Democratic Party, Solomont got his first exposure to national politics as an undergraduate in 1968, when he worked as a page during the tumultuous Democratic National Convention in Chicago. Later, he served as the party’s national finance chair from 1997 to 1998, and he was an early supporter of Barack Obama’s bid for the presidency. He played key roles in the presidential campaigns of John Kerry, Al Gore, Bill Clinton and Michael Dukakis.

Through the years, Solomont has remained deeply involved in Tufts. As a Tisch College senior fellow and visiting instructor, he taught an undergraduate political science seminar on the American presidency, a course known for the political luminaries and leaders he brought to campus.

A trustee emeritus of the university, Solomont was the founding chair of the Tisch College board of advisors. To mark the 10th anniversary of the college in 2011, his friends and colleagues endowed the Alan D. Solomont Lecture in recognition of his leadership as an active citizen. Congresswoman Nancy Pelosi, the first woman speaker of the U.S. House of Representatives, gave the inaugural lecture, and Solomont himself was selected to deliver the second lecture this past April.

Solomont has served on the boards of a number of other nonprofit and for-profit organizations, including the Boston Medical Center, Boston Private Bank & Trust Co., Angel Healthcare Investors, the New Israel Fund, Israel Policy Forum, the University of Lowell, the University of Massachusetts, the John F. Kennedy Presidential Library Foundation and the WGBH Educational Foundation. He has chaired the boards of Combined Jewish Philanthropies of Greater Boston and Hebrew Senior Life, a nonprofit elder-care provider in Boston.

Tisch College was established in 2000 as the University College of Citizenship and Public Service, with seed funding from Pamela Omidyar, J89, and Pierre Omidyar, A88, the founder of eBay. The enterprise broke new ground by embracing public service and active citizenship as university-wide values not tied to any one school or discipline. In 2006, Jonathan M. Tisch, A76, a university trustee, donated $40 million to endow the college that now bears his name.

Wilson, who will continue as interim dean until Solomont assumes the deanship in January, had served as the college’s associate dean and director, beginning in 2004.  She has been instrumental in positioning Tisch College as a national model for university civic engagement. “I want to personally extend my deepest gratitude to Nancy Wilson for her superb stewardship of Tisch College over the past two years and until Ambassador Solomont arrives in January,” Harris said. “Nancy’s work at the college has helped define the Tufts experience for students and faculty on all three of our campuses as well as for residents of the communities we serve.”