Felines are responsible for large loss of indigenous wildlife, says a group of Tufts researchers, and they suggest remedies 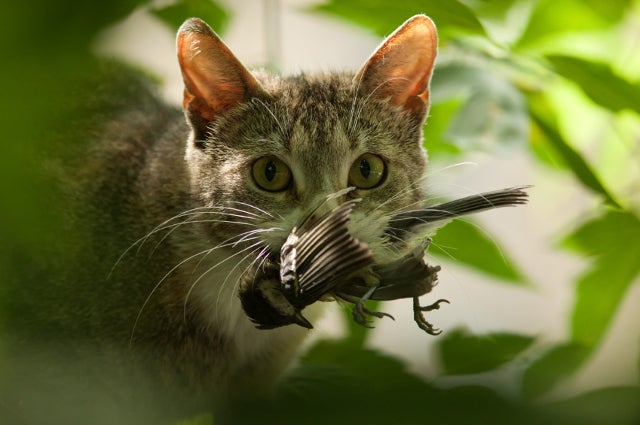 Feral and free-roaming cats represent a global epidemic, and what to do about them is one of the most controversial and contentious issues in veterinary medicine and conservation biology today.

A recent article in the New York Times brought attention to the problem, referencing a report by the Smithsonian Conservation Biology Institute and the U.S. Fish and Wildlife Service that estimated that feral and free-roaming cats kill an estimated 1.4 to 3.7 billion birds and 6.9 to 20.7 billion mammals in the United States alone each year. A previous Tufts Now article cautioned that this is only a single analysis and could be flawed, but multiple other studies provide similar results, and there are literally thousands of scientific articles published over the last 50 years documenting the damage cats cause to indigenous wildlife.

Cats are listed by the International Union for Conservation of Nature (IUCN) as one of the 100 worst non-native invasive species. They kill more wild animals in the United States than any other human-linked cause, according to the IUCN, and they have caused or contributed to 14 percent of all modern bird, mammal and reptile extinctions. The estimated annual environmental and economic cost of feral and free-roaming cats in the United States is $17 billion, according to a 2005 article in Ecological Economics.

From the standpoint of environmental effects on wildlife, there is little difference between feral cats—domestic cats that have reverted to a wild state—and free-roaming cats, domestic cats that are allowed to range freely outdoors.

It has been suggested that cats are only a problem of critical concern in pastoral areas of endangered wildlife habitat, especially on islands, but multiple studies conducted in urban locations also demonstrate drastic effects, especially on birds.

According to Flo Tseng, director of the Tufts Wildlife Clinic, cat attacks are one of the most frequent causes of injury to wildlife that are brought to the veterinary school. Many of these injuries affect young wildlife that are naïve about predators. In the majority of cases, the injuries are fatal.

Several approaches have been taken to address the problem of feral and free-roaming cats, but unfortunately, none of these has been successful. Wildlife advocates sometimes suggest that cats be trapped and then simply removed from the area (called trap-removal programs), but because most of these cats are unable to be tamed (and therefore make poor pets), they generally languish as unadoptable animals in overcrowded shelters or are euthanized. In addition, computer models demonstrate that the reproductive capacity of cats is so great that unless an unrealistically high percentage of cats can be removed, resident cats that have not been captured simply continue to breed and maintain the population numbers.

Cat advocates generally support management of feral cat populations by trap, neuter and release (TNR). With this approach, cats are trapped, sterilized, returned to the site of capture and released. Depending on the TNR program, a variety of other services may also be provided, including assessment for infectious diseases, treatment of illnesses and injuries, vaccination and removal of socialized cats for adoption. The Humane Society of the United States recommends TNR, and 76 percent of U.S. respondents in several 2006 studies strongly or mostly support these programs. Complaints regarding feral cats generally decrease after implementation of TNR, according to a 2002 study.

Unfortunately, despite the current popularity of TNR programs, and in some instances the application of substantial resources over prolonged periods, there are actually almost no data to support their effectiveness in controlling feral cat populations.

For example, although more than 1,000 members of the California Veterinary Medical Association sterilized 170,334 feral cats between July 1999 and May 2002, in a $9.5 million project financed by Maddie’s Fund, there is little evidence of any change in the overall feral cat population in the state. A nine-year TNR program in Rome decreased an original cat population of 1,655 by just 22 percent, even though 1,423 cats were neutered.

As with trap-removal programs, it is difficult or impossible to capture all cats, so sexually intact cats that are not captured quickly repopulate the area, along with outside cats that move in. Some studies predict that because cats live longer after castration or spay, a TNR program can actually have the untoward effect of increasing the number of cats. The American Veterinary Medical Association’s position on TNR is that the effect of these programs as currently employed is insignificant to the overall problem.

Medical methods of fertility control are being investigated, but while these methods hold great potential for pets, if an injection is required to sterilize, that strategy is unlikely to be any more effective than TNR. Contraception methods delivered by oral bait are also being evaluated, but an effective, single-dose contraceptive that would not also be attractive to other animals has yet to be found.

Our own research is directed at the potential of sterilizing cat populations by vasectomy (leaving the testicles intact) and hysterectomy (leaving the ovaries intact) rather than by castration and spay as is the case with traditional TNR. These methods (trap-vasectomy-hysterectomy-release) would leave sexual hormones intact and offer an advantage by creating breeding competition and confusion and have been used successfully with other wildlife species.

Computer models indicate that vasectomy and hysterectomy should be much more effective at eliminating feral cat populations, but this still requires validation in actual populations of feral cats.

What is clear is that feral and free-roaming cat populations cause tremendous and often irreversible damage to indigenous wildlife populations in both urban and rural environments around the globe. Currently there are no methods that will easily and effectively eliminate a population of feral cats. On the other hand, damage caused by owned free-roaming cats can be solved effortlessly, simply by keeping your pets indoors.