Flatworms Lose Their Heads but Not Their Memories 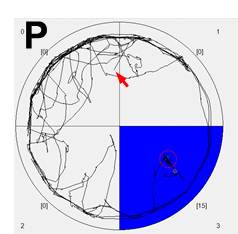 Automated testing apparatus made it possible to track how quickly and for how long each flatworm overcame its aversion to the blue light in order to get food
MEDFORD/SOMERVILLE, Mass. (July 18, 2013) -- Tufts University biologists using new, automated training and testing techniques have found that planarian flatworms store memory outside their brains and, if their heads are removed, can apparently imprint these memories on their new brains during regeneration.

The work, published online in the Journal of Experimental Biology, can help unlock the secrets of how memories can be encoded in living tissues, noted Michael Levin, Ph.D., Vannevar Bush professor of biology at Tufts and senior author on the paper.

"As bioengineering and biomedicine advance, there's a great need to better understand the dynamics of memory and the brain-body interface.  For example, what will happen to stored memory if we replace big portions of aging brains with the progeny of fresh stem cells?" said Levin, who directs the Center for Regenerative and Developmental Biology in Tufts' School of Arts and Sciences.

Planaria have a remarkable capacity to quickly re-grow new body parts, and decades-old research on planarian learning had suggested that memory can survive brain regeneration. Difficulties inherent in complex and tedious manual worm training experiments contributed to planaria falling out of favor as a model for such research, but the new automated training system developed by the Tufts researchers may reverse that.

"We now have a reliable, state-of-the-art approach that moves beyond past controversies to identify quantitative, objective, high-throughput protocols for studying planarian long-term memory capabilities," said Tal Shomrat, Ph.D., first author on the paper. A former postdoctoral associate with Levin, Shomrat is now a postdoctoral researcher at the Hebrew University of Jerusalem. "I believe that investigating this unique animal that displays relatively complex behavior and can regenerate its entire brain in only a few days will provide answers to the enigma of acquisition, storage and retrieval of memories," he added.

Shomrat and Levin focused their attention on planaria of the species Dugesia japonica. One planarian group lived in containers with a textured floor while the other was housed in smooth-floored Petri dishes. The worms, which naturally avoid light, were then tested to see how readily they would eat liver in an illuminated quadrant on the bottom of a rough-textured dish.

Automated video tracking and subsequent computer analysis of the worms' movements (image above) showed that the group familiarized to the rough-floored dishes overcame aversion to the light significantly more quickly and spent more time feeding in the illuminated space than did the non-familiarized group.

Off with Their Heads

Both groups of worms were then decapitated and housed in a smooth-floored environment while their heads regenerated.  Two weeks later, the fully regenerated segments were again tested.  Worms regenerated from the familiarized group were slightly but not significantly quicker to feed in the lighted part of the container.  However, when both groups  of worms were given a brief refresher session of feeding in the textured environment, then removed and retested four days later, the planaria generated from familiarized segments were significantly quicker to feed than those regenerated from unfamiliarized worms--showing that they retained recognition of the link between this type of surface and a safe feeding environment.

Exactly how this memory was retained and recalled remains unclear. Shomrat and Levin suggest that traces of memory of the learned behavior were stored outside the brain, and imprinted on the newly-regenerated brain through mechanisms not yet identified. More investigation is needed to determine the basis for these interactions between the regenerating central nervous system and remote somatic tissues, as well as the mechanism by which specific memories are encoded in physical changes within the brain and body.

The study was funded by the G. Harold and Leila Y. Mathers Charitable Foundation.

Tufts University, located on three Massachusetts campuses in Boston, Medford/Somerville, and Grafton, and in Talloires, France, is recognized among the premier research universities in the United States. Tufts enjoys a global reputation for academic excellence and for the preparation of students as leaders in a wide range of professions. A growing number of innovative teaching and research initiatives span all campuses, and collaboration among the faculty and students in the undergraduate, graduate and professional programs across the university is widely encouraged.