A Defiant First in the Marathon 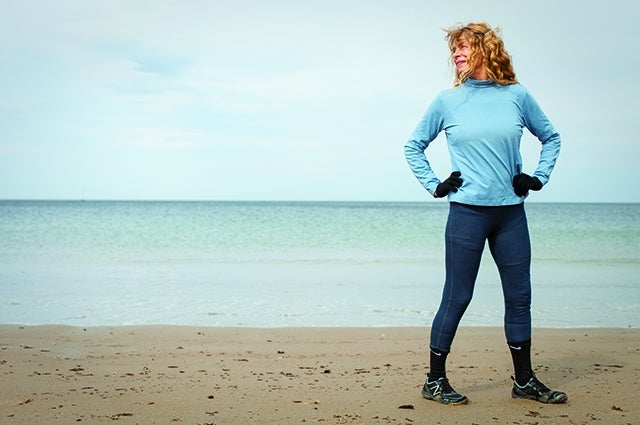 The Boston Marathon that ended in smoke and devastation began in sun and overdue glory for Roberta “Bobbi” Gibb. As a grand marshal for the marathon’s 117th running this past April 15, Gibb was an honored guest, given a prime seat in a pace car ahead of the lead runners pounding their 26.2-mile route to Boston.

It was the same route that she herself, then a petite 23-year-old former Tufts student, completed in 1966. So what if marathon officials had told her that neither she nor any other female could enter? Gibb ignored them, sneaking into the starting field dressed to disguise her gender. Even though her feet were bleeding, partly from blisters raised by the boys’ running shoes she had had to wear (“women’s running shoes” was an oxymoron back then), she made it across the Boylston Street finish line with a time of three hours, 21 minutes, and 40 seconds, better than two-thirds of the other runners—all men—who began the race.

Gibb didn’t just finish a marathon that day; she finished off the prevailing view of distance running officials that women were physiologically incapable of holding up for much more than a mile. “I’m not sure that all these women running now get it that people truly believed that,” says Gibb, an extremely fit and ready-looking 71-year-old artist and writer who still tries to run at least an hour every day.

We are lunching in a restaurant known for its seafood, but Gibb is eating meatballs. Hers has never been the predictable course. She wanted to be a doctor, but became a Navy wife. Though interested in neuroscience, she spent 17 years practicing law. Rather than legal briefs, today she writes books and works on her art, including bronze figurines of a pony-tailed girl in full stride, earlier versions of which were given to the top three finishers at the first women’s Olympic marathon trials in 1984. “I was always drawn to art, biology and writing,” says Gibb, who splits her time between California and Massachusetts. “My problem has always been finding ways to combine them.”

Gibb grew up in Winchester, Mass., in what she remembers as “an incredibly intellectual house.” Her father, Tufts chemistry professor Thomas Gibb, was a brilliant scientist, and her mother was active in politics and other pursuits. Even as a child, Gibb loved to run. Not the formal kind of running with stopwatches and fancy garb, though: “I just loved running through the woods with the dogs.” To protect her feet, she eventually took to wearing her leather nurses shoes (her first job out of high school was as a nurse’s aide at Winchester Hospital). “Running was like rediscovering what it is to be human in mind and body.”

In 1960, Gibb began focusing on math and science at Tufts’ School of Special Studies during the day and taking art classes at the Tufts-affiliated School of the Museum of Fine Arts at night. Her boyfriend, Will Bingay, A67, a member of the Tufts cross-country team, introduced her to distance running. 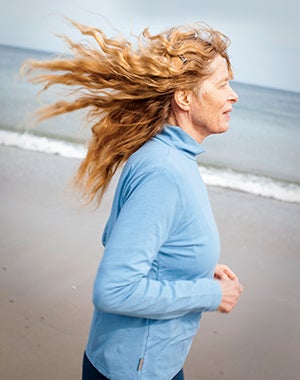 “It didn’t even occur to me that women were not allowed to enter,” says Bobbi Gibb. Photo: Kathleen Dooher
“I was initially dumbfounded by the idea of running even five miles,” says Gibb, but soon she was running from her home to the Hill, where she and Bingay would climb the Goddard Chapel tower steps to ring the chimes. “He took bass and I took soprano,” she recalls. “We just made things up. I don’t know if the campus has ever recovered from the sounds we made.”

Gibb, who until 1964 had never heard of the Boston Marathon, watched it for the first time that year. “I totally fell in love with it,” she says. “I recognized a kindredness with these runners, and I wanted to be part of it. It was totally irrational, but from then on, my whole life was geared to that goal.”

With no concept of formal training, she ran everywhere, every day. That summer, she drove her father’s Volkswagen bus cross-country, stopping to run with her malamute puppy across the Mississippi, into the Rockies and on to the Pacific. “My way of expressing joy was to see a field and then just run full speed into it.”

She attended the Museum School full-time in the fall of 1964. And she built up her endurance, running, for example, 65 miles over two days of a hundred-mile, three-day equestrian trail ride in Vermont. Then, before she could graduate from the Museum School, she moved to San Diego, where Bingay was stationed with the Navy. The two married in 1965, and Gibb enrolled in the University of California at San Diego, where she worked to complete her pre-med requirements.

From San Diego, she sent in her application to enter the 1966 race. She was stunned by the curt rejection that came in reply. “It didn’t even occur to me that women were not allowed to enter,” she says. The Boston Athletic Association was working under the ground rules of the U.S. Amateur Athletic Union, which refused to sanction women in marathons. “Because I was not in the world of sports, I didn’t know that.”

Her anger made her even more determined. “I simply wanted to prove to them that a woman could do it.” As she wrote in her 1980 autobiographical booklet To Boston with Love, she believed that “once people knew women could run marathon distances, the field would naturally open up.”

Throwing off the Hoodie

In April 1966, Gibb boarded a bus in California. She arrived in Boston four days later, exhausted and with less than 24 hours until the starting gun. Uncertain how other runners, let alone race officials, would react to her forbidden presence, Gibb wore her brother’s Bermuda shorts and a hooded blue sweatshirt over a one-piece bathing suit. She hid behind some bushes, waited for runners to pass and then jumped into the pack.

For a few minutes, there was silence.

Then some of the men near her began asking if that was a woman. The answer became obvious when Gibb threw off her sweatshirt, freeing her long hair to flow in the breeze. “I actually thought I’d be pulled out of the race or maybe even arrested,” she says.

Her fears were not unfounded. In the following year’s race, Kathrine Switzer, a Syracuse University student, was manhandled by a marathon official who realized too late that the “K.V. Switzer” who had entered was female. Her boyfriend intervened, and Switzer became the first woman to officially register and run in the Boston Marathon, albeit without official consent.

Gibb managed to complete her run. “The men and the crowd were really supportive,” she remembers. “‘We won’t let them throw you out,’ some of the guys said.” Buoyed by cheers from the spectators, Gibb kept going. “I wasn’t tired for most of the race.” There was, however, the matter of her bleeding feet: “I didn’t know you were supposed to break in your shoes.” And, she adds, “I also didn’t know I was supposed to drink water. If I’d actually known what I was doing, I would have finished that first marathon in under three hours.”

Reporters started focusing on her. Massachusetts’ governor, John Volpe, shook her hand at the finish line. Word of Gibb’s feat soon spread far beyond Boston. “Last week a tidy-looking and pretty 23-year-old blonde . . . not only started but also covered the 26-mile, 385-yard course at a clip fast enough to finish ahead of no fewer than 290 of the event’s 415 starters,” Sports Illustrated reported on May 2, 1966, noting that “the performance should do much to phase out the old-fashioned notion that a female is too frail for distance running.”

Gibb ran in Boston again and was the women’s winner—unofficially, of course—in both 1967 and 1968. Slowly, other women joined her, and in 1972 the AAU finally reversed its ban on female distance runners.

From Law to Brain Science

After that first marathon, Gibb returned to California and earned a bachelor of science degree from UC San Diego in 1969. She wanted to become a doctor, “but it was very difficult for a woman to get into medical school back then,” she says. “At one interview, I was told that I was too pretty and that I would distract the boys in the lab.”

After getting divorced and remarried, Gibb returned to the Boston area in the early 1970s, still pursuing multiple interests. By day she did neurological research in an MIT lab, working for years with the legendary cognitive scientist Jerome Lettvin. By night she took classes at the New England School of Law, earning a J.D. in 1978.

Gibb practiced law in Massachusetts for 17 years before moving back to California. She also ran the Boston Marathon again in 1983 and 1996 (finishing in just over six hours at the age of 53). Then, in 2001, she ran it one more time, to honor a close friend who had amyotrophic lateral sclerosis (ALS). She was part of a team that raised $100,000 to fight the disease.

Gibb, who has written a memoir titled Wind in the Fire: A Personal Journey (available online through the Harvard Book Store), continues to pursue both her art—sculpture, paintings, murals and writing—and her love of science. She is doing research as an associate for the Cecil B. Day Neuromuscular Laboratory, intent on finding the causes of and cures for neurodegenerative diseases like ALS. “I’m just now figuring out what I want to do when I grow up,” she says.

It took decades, but Gibb was finally honored for her breakthrough persistence. In 1996, on the 100th anniversary of the Boston Marathon, the Boston Athletic Association officially recognized her times and awarded her medals for her finishes in 1966, 1967 and 1968. The organization also added her name to the plaque in Copley Square that lists marathon winners.

In 2009, she received the Tufts University Athletics Distinguished Achievement Award. Two years later, she was one of six people (including the Boston Celtics legend Larry Bird) to be inducted into the Sports Museum of New England’s Hall of Fame. At that event, Gibb’s award was presented by Joan Benoit Samuelson, the women’s winner of the Boston Marathon in 1979 and 1983 and the first women’s Olympic Marathon champion in 1984. Samuelson owns one of Gibb’s running-themed sculptures.

“When it came to that first marathon, I was sort of out there hacking through the jungle with no path,” says Gibb. “Then women like Joan at least had a path to follow.” And today’s women? “They are running on a superhighway.” The full circle from banned to feted closed when the Boston Athletic Association named Gibb and Sara Mae Berman—who succeeded Gibb as female marathon winner in 1969, 1970 and 1971—grand marshals for the 2013 race.

Although she was not at the finish line when the bombs went off, Gibb felt the impact. She had already planned to enter the 2016 marathon to mark the fiftieth anniversary of her barrier-breaking run, but now she hopes to run in 2014. “The marathon is a celebration of life and the human spirit,” she says. “And I want to be there next year to help reaffirm that.”

Phil Primack, A70, is a freelance editor and writer in Medford, Massachusetts.