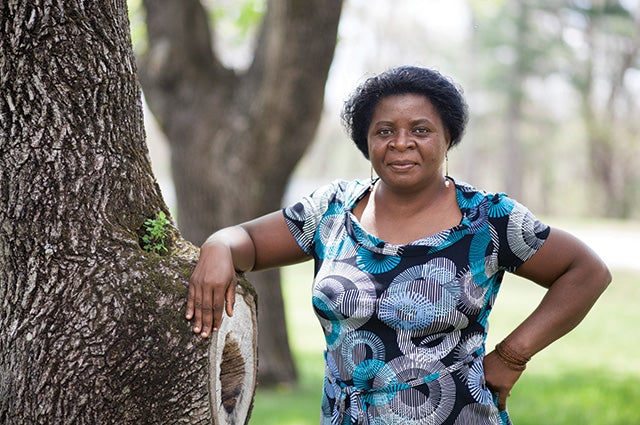 Hellen Amuguni laughs easily, but is dead serious about the work in Africa that has defined her career: halting the spread of infectious disease, helping communities thrive—and empowering women.

Over lunch recently in the Agnes Varis Campus Center at Tufts, Amuguni, V11, a research assistant professor in the Cummings School’s new Department of Infectious Disease and Global Health, talked about how she began her career focusing on women’s roles in the nomadic livestock-keeping communities of her native Kenya.

Newly graduated from the veterinary school at the University of Nairobi, she says she would get a call from a farmer about a sick cow. “I would go [to the home], and ask, ‘When did the cow fall sick?’

“He’d turn and ask his wife. The wife would tell him, and then he’d tell me. I’d say, ‘Why don’t I just talk to her, and she’ll give me the information?’ ”

She laughs and rolls her eyes in the telling. The exchange among the farmer, his wife and the veterinarian sounds a bit like domestic comedy, but women’s status in some cultures has serious implications for human and animal health. Amuguni uses the story to illustrate a larger point: Engaging women and bringing them more to the forefront in African communities are essential for managing disease outbreaks at the village level in order to avoid pandemics with global consequences.

From a world health perspective, the challenge is daunting. Africa is a hot spot for zoonotic illnesses—those diseases that animals transmit to humans and vice versa. An astounding 70 percent of the diseases that have infected people over the past half-century have been zoonotic in nature, according to the U.N. Food and Agriculture Organization.

Scientists believe the HIV/AIDS epidemic got a foothold in Africa from people eating infected monkey meat. Also problematic in the region is tuberculosis, which can be transmitted by elephants or contracted by drinking raw milk. Yet another zoonotic threat is Ebola, which is often fatal and has no known cure, and is transmitted by eating monkey, buffalo and other kinds of bushmeat infected with the virus.

Many Africans live in close proximity to both domestic and wild animals and often compete with them for water and other scarce resources, so conditions for the transmission of disease—through infected food and shared drinking and bathing water—are rife, says Amuguni.

The U.S. Agency for International Development (USAID) and global health organizations have taken a number of steps to control disease outbreaks in Africa as well as in other parts of the world where the risk is high: in Southeast Asia, where the serious pneumonia SARS and avian flu thrive; along the Amazon River; and across a swath of Central and South Asia that includes Pakistan, Bangladesh, Nepal and India. 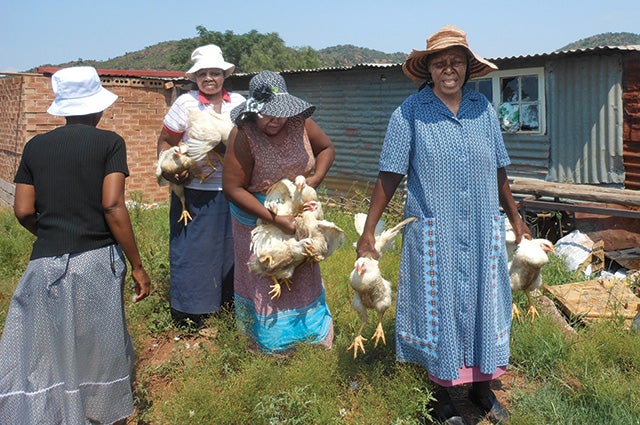 In many African communities, women are the sole caretakers of the livestock that feed their families. Photo: Courtesy of Hellen Amuguni

Through the multimillion-dollar global effort known as RESPOND, USAID and its partners are developing training programs for veterinarians, physicians and public health officials in regions where new diseases are likely to emerge.

Amuguni is the Tufts University liaison for RESPOND in an African region encompassing six countries—Kenya, Uganda, Tanzania, Rwanda, Ethiopia and the Democratic Republic of Congo—that are home to more than 280 million people and 400 species of mammals. She helps health professionals there respond to infectious disease outbreaks employing what is known as “one health”—a collaboration among multiple disciplines, including medicine, veterinary medicine and public health—to protect people, animals and the environment.

In some African communities, a simple family meal of infected bushmeat and unboiled milk can be life-threatening. Something as simple as straining drinking water through a cloth can stop the spread of such parasites as bilharzia, which attacks the liver, lungs and eyes in humans. “If you educate women, you definitely kill” the potential for disease transmission, says Amuguni. “Women will go to the well and pass on that information to every other woman in the village.”

Amuguni’s idea of empowering women as agents in combating health threats was put to the test a decade ago when she worked for Veterinarians without Borders among Kenya’s Turkana people. The Turkana are nomads whose livelihood depends on livestock, and she hoped to train the women, who tend the cattle and prepare the food, to serve as community-based animal health-care agents.

Her biggest challenge, however, was just getting to talk to the women.

Sometimes it took two or three months simply to gain permission from the male leaders. “I spent months just talking to men,” recalls Amuguni. “We’d spend a lot of time talking about my children. They used to find it funny that I only had two kids: ‘How can you have two kids only? You should be having 20 children!’ And also: ‘Where’s your husband? Why would your husband let you come all this way on your own? He should divorce you!’

“I really built a relationship with the men first,” she says. “I’d get them to give me a calendar of who does what in the household. They’d realize women did so much. Who wakes up in the morning, brings the water, feeds the animals, milks the animals, treats the animals when they’re sick?”

The men would respond: “That’s the women’s job.” Amuguni pushed ahead: “OK, do you think we should give these women a little more training so they’d know how to identify these diseases?” The men relented.

“Working in Africa, and also having grown up there, one of the things I’ve realized is that sometimes it doesn’t matter how educated people are,” she says. “Social and cultural issues and the way they do things are still really, really important, and I have to respect that.”

Amuguni is not one to give up easily. “She’s a no-nonsense person,” says her Ph.D. advisor at the Cummings School, Saul Tzipori, chair of the Department of Infectious Disease and Global Health.

He hired his former Ph.D. student to lead Tufts’ participation in the RESPOND project in Africa, in a region spanning more than 1,600 miles from east to west, roughly the distance between Boston and Denver. She consults with faculty members at 14 African universities on training programs in One Health.

“The mandate we have is to build the capacity of governments, institutions and civil societies in the countries we work in to respond to any emerging pandemic disease,” Amuguni says. The work involves training scientists and others at the universities as well as building emergency response teams of veterinarians, physicians, anthropologists and agricultural experts.

“I love talking,” says Amuguni, who did her doctoral work in infectious disease. “And I like working with people a lot more than just doing bench science.”

It’s been a good partnership.

“Hellen Amuguni knows her Africa through personal experience,” says Tzipori, who also holds the Agnes Varis Chair in Science and Society at Tufts. “She has managed to command a great deal of respect from her African colleagues and partners, some of whom were her teachers. She knows her stuff.”

The daughter of a physician, Amuguni, 47, once considered a career in social sciences. Her current work enables her to help both humans and animals.

She describes speaking to farmers about the importance of testing for tuberculosis and brucellosis before selling milk at the marketplace. “Even more important is ensuring that health workers and the governments know how to contain disease,” she says.

Last year, for example, there was an outbreak of Ebola hemorrhagic fever in Uganda and the Democratic Republic of Congo. “We have been working with their governments to train and develop an emergency response team in preparation for such outbreaks,” she says. “We can see it beginning to work.”

Mark Sullivan is a freelance writer in Ashland, Mass.