Jane F. Desforges, M45, a professor emerita at Tufts University School of Medicine and a world-class hematologist, died on Sept. 7. She was an authority on anemia, specifically sickle-cell disease and Hodgkin’s lymphoma.

“During more than 60 years in medicine, she had a profound and lasting impact on generations of physicians,” wrote Harris Berman, dean of the School of Medicine, in an email to the Tufts community.

Desforges was only one of five women in a class of 98 men at the School of Medicine, and was an inspiration to countless members of the Tufts community, particularly women in medicine. After graduating from medical school, where she met her husband, Gerald Desforges, M45, she was a resident at Boston City Hospital (now Boston Medical Center) for two years and then went to Salt Lake City to work with the noted hematologist Maxwell Wintrobe. She returned to Boston City Hospital and held a variety of roles, including assistant director and then associate director of the Tufts Medical Service and Tufts Hematology Laboratory, and eventually director of laboratories. 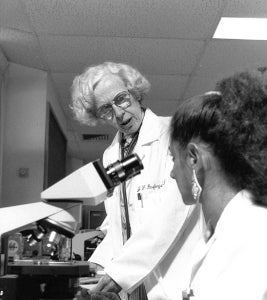 Jane Desforges, with a student in 1989. Photo: Paula Lerner
Desforges joined the Tufts faculty in 1952, and rose through the ranks. She was promoted to professor of medicine in 1972, when she joined New England Medical Center (now Tufts Medical Center). She was appointed distinguished professor of medicine in 1992 and distinguished professor emerita in 1994. Desforges was a respected member of the medical center’s hematology division, where she mentored fellows while running a laboratory and a vibrant clinical referral practice. She provided second opinions and care for patients from throughout New England and across the United States while teaching Tufts medical students in her well-known hematology course.

A master clinician and a compassionate physician, Desforges expected unfailingly rigorous thinking from her students and fellows, and only the most dedicated care for her patients. She had a reputation as an extraordinary teacher: she received the Outstanding Teacher Award for 13 consecutive years. She also received a Distinguished Teacher Award from the American College of Physicians in 1988.

As a teacher, her goal was to get medical students and research fellows to appreciate problems in a logical way, to understand how things work and why. “My students would say I emphasize logic, common sense and focusing,” she said in a 1989 interview published in the medical alumni magazine. “I stress not doing 20 different tasks at once. If we’re not parsimonious, then we’re not thinking,” she said.

A member of the Institute of Medicine, Desforges served as president of the American Society of Hematology and treasurer of the board of governors of the American Board of Internal Medicine. From 1960 to 1993, she was associate editor of the New England Journal of Medicine. In 2001, she received the Massachusetts Medical Society’s Lifetime Achievement Award. In her honor, her family and many supporters established the Jane F. Desforges, M.D., Chair in Hematology/Oncology in 2003.