Their heads cut off, worms grow back brains—and retain their earlier memories 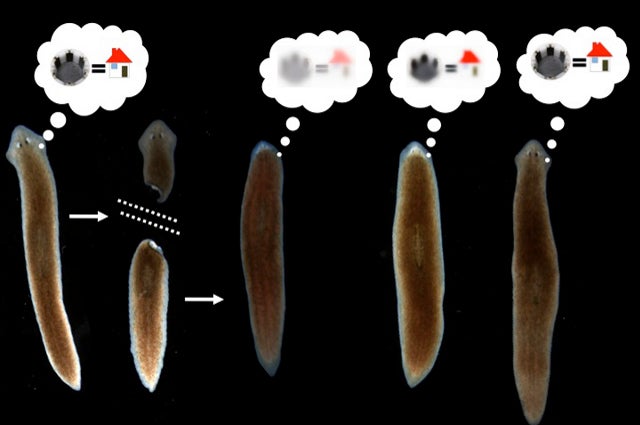 Tufts biologist Michael Levin peels open a rectangular Tupperware container to show off his babies: a dozen or so flatworms of the genus Planaria. They don’t look like much. Brown and about an inch long, they appear almost featureless as they swim around in spring water. But inside those little worms, says Levin, are surprisingly advanced brains. “They have most of the same neurotransmitters we do,” he says. “Their brains are very similar to our common ancestor.”

And planaria have an ability we humans may never have—they can grow their brains back. “This is the only model species that enables the study of memory and brain regeneration in the same animal,” says Levin, a professor and director of the Tufts Center for Regenerative and Developmental Biology. His lab has been studying regeneration for years in animals such as frogs by using the body’s natural electrical signals to control where and how arms and tails grow back.

Planaria, however, offer a unique opportunity: the ability to study the nature of the brain itself. When a planarian grows back its brain, is it still the same worm? Does it retain its personality? Does it still have the same memories? These questions were first asked by a pioneer in the field, James McConnell, in the 1960s, but never investigated using modern techniques.

Using novel techniques, Levin, A92, has come to the surprising conclusion that the answer to these questions may be yes. While it stands to reason that animals store memories inside their brains, his experiments show convincingly that planaria also store them outside their brains, in other body tissues. That discovery has the potential to shed light on human brains as well, particularly for people who might be undergoing implantation of stem cells into the brain for treatment of brain injury or degenerative disease.

To get to the bottom of these mysteries, Levin first had to figure out how to train and study these worms—no small task. In a hallway outside his laboratory, he opens the door to a small room barely larger than a walk-in closet. Inside is a large contraption resembling an oversized droid from Star Wars. On top are 12 small wells, each of which can contain a petri dish, which in turn can hold one worm apiece. 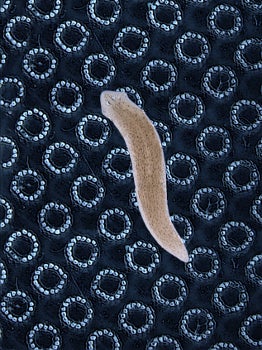 A planaria worm on its laser-etched training ground. Photo: Courtesy of Tal Shomrat and Michael Levin
Think of it as worm boot camp—a computerized training device that teaches planaria new behaviors. When the worms are placed in the dishes, they can be put through their paces using different stimuli: food, light or weak electric shocks.

“It’s a consistent environment that rewards and punishes certain behaviors,” says Levin. That’s important for planaria, which historically have been incredibly difficult to study. It can take up to an hour to train a single worm to perform a behavior manually, and while you are training other worms, the first worm is busy forgetting the behaviors it just learned.

Levin was well suited to solve the problem. A child prodigy in computers, he studied computer science at Tufts before eventually switching to biology for graduate work. That expertise was crucial as he helped design and build a machine that could conduct the experiments electronically, performing the same training regimen around the clock for a dozen worms at once.

After four years fine-tuning the mechanism, he and a post-doc in the lab, Tal Shomrat, were finally able to perform experiments earlier this year. In one breakthrough study, Levin and his research team placed some worms in dishes, each with a tasty piece of liver. Half of the worms were placed in dishes with rough bottoms, while the other half were put in smooth-bottomed dishes.

Ordinarily, when placed in a new environment, planaria tend to take some time to explore before deciding it’s safe enough to eat. The machine measured the time it took for each worm to start eating, showing surprising variation among different worms with distinct personalities.

Next, Levin and his colleagues cut off the heads (and brains) of the worms and allowed them to grow new ones before placing them back in the dishes for another round of training. The results were striking. The worms that had been in the rough dishes immediately recognized the environment as safe and began eating right away, while the worms that had not been in that environment continued to take time to explore.

“It was amazing to see that this actually works,” says Levin, who points to the results as evidence that worms somehow stored their memories of the rough surface in other tissues even as they lost their brains.

Exactly how they stored those memories, or imprinted them on the newly regenerating brain, is unknown. Based on his other research, Levin speculates that it might have something to do with electrical charges in non-neural cells that allow them to talk with one another to exchange information during development and regeneration.

The information from those communications could be somehow encoded inside the cells of other tissues, and retained after the brain is regenerated. “The simplest explanation is that basically somatic tissues are doing exactly what the brain does,” he says.

“Planarians are possibly the animal that had the ‘first brain,’ and provide a wonderful model for exploring the workings of complex processes such as memory,” says Robert Raffa, a professor of pharmacology at Temple University, who was not involved with Levin’s research. “Studying how memory might be transferred during regeneration in planarians, and by what neuronal populations, is an exciting area of investigation that could provide insight into memory loss in humans, such as occurs in aging and Alzheimer's disease.”

The potential implications are significant, says Levin. If we can understand how memories are encoded in cells, we may be able to recover them in damaged human brains, or build new computers that exploit the ability of living tissues to store and process information.

To further explore those possibilities, Levin’s lab is taking a closer look at planaria’s non-brain cells to understand how an idea like “rough surface equals safe feeding environment” can be encoded in tissues.

Michael Blanding is a Boston-based writer. His book The Map Thief is due out from Gotham in June 2014.