Scalia Argues Against Legislating in Court

The U.S. Supreme Court justice spoke at Tufts about the need to stick to the original intent of the authors of the Constitution 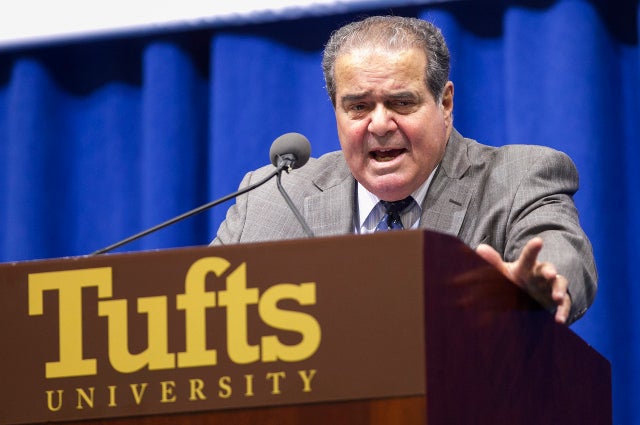 It’s the job of voters and legislators to run the country, not the U.S. Supreme Court, Justice Antonin Scalia told the more than 1,000 students, faculty, staff and guests who attended the 17th Richard E. Snyder President’s Lecture Series at Tufts on Oct. 2.

Scalia fit the bill for the lecture series, which seeks speakers “who have challenged conventional wisdom in their professional work.”

Scalia recalled an old comic strip, “There Oughta Be a Law,” saying it portrayed a very sound and healthy democratic reaction to what we think needs changing.

But people don’t say “there ought to be a law” anymore, he said. Nowadays, “if there’s something you really hate, it has to be unconstitutional,” Scalia said, criticizing those who believe that the Constitution is an organic document that must grow along with the society it governs. Instead, it is a legal document that “says some things and doesn’t say other things,” he said.

A Supreme Court justice should perform what he called “lawyer’s work,” interpreting the meaning of the Constitution’s words to reflect as closely as possible the intentions of those who wrote them. This leads to more, not less, flexibility in dealing with issues and laws, he said.

It is the same with abortion, he said, where respectable views on each side can no longer be debated. “It’s no use anymore,” he said. “It’s off the democratic stage because the court found in the Constitution a right to abortion, which is nowhere expressed or even reasonably implied.”

Those advocating a living Constitution that changes with the times are “forcing it upon us, because they want everyone to do things their way, coast to coast,” he said. Originalism, basing interpretations on the intent of the Constitution’s original authors, is not a stalking horse for conservative views. To the contrary, this approach has led to both liberal and conservative decisions, he said.

He warns that the “morphing Constitution” will produce some new rights—“the right to abortion, the right to homosexual sodomy—but it will also take away some old rights.”

In contrast, he said, originalist judges are not always pleased, having to reach results they do not like. Scalia described how he was the fifth vote in 1989 in the American flag burning case, Texas v. Johnson. The court ruled that it was constitutional to burn the flag as long as it was your own flag.

“I didn’t like it at all,” Scalia said. “If I’d had my way, I would have thrown Mr. Johnson into jail immediately. But it was clear to me that the First Amendment permitted it—and all criticism of the flag, the court, the country.”

Scalia also took questions from about a dozen students, including several asking how originalists would have the Constitution deal with issues its authors could never have foreseen, such as new technologies. Scalia used the electric chair and lethal injection as examples in response. Should they be considered cruel and unusual punishment under the Eighth Amendment, as some have suggested, referring to Baze v. Rees in 2008, which upheld Kentucky’s use of lethal injection? Scalia’s response: Not when the original authors approved of hanging, a much crueler method.

Then there is wiretapping. Is conversation covered by the Constitution’s protection of people’s person, house, papers and effects under the Fourth Amendment? In the first case the court considered, it held conversation was not covered, and should be handled by statutes against wiretapping, Scalia said. But in Wolf v. Colorado in 1949, the court changed its mind.

The court held that recording conversations can violate the Fourth Amendment, which was dead wrong, Scalia said, warning it will now play into the current cases about how the National Security Agency can gather and use information. It’s a question that should be up to the people, not the court, Scalia said.

“Instead, because we have misinterpreted the Fourth Amendment, it will be up to me and my colleagues,” and not decided by statute, Scalia said. “This is where we are now.”