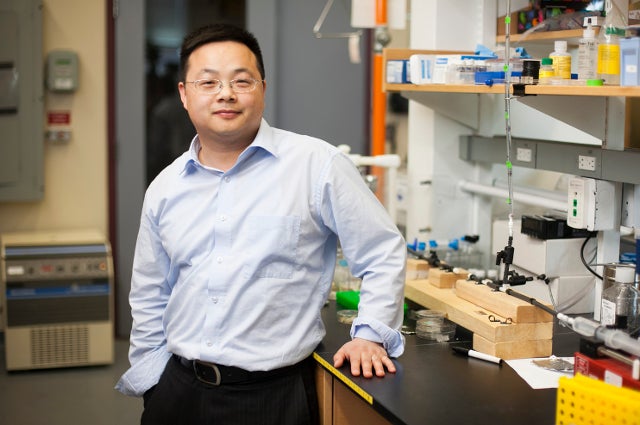 When Qiaobing Xu was named an assistant professor of biomedical engineering at Tufts in 2010, his first goal was to find a research niche to make his mark in. He soon came up with a literally cutting-edge concept: whittling wood.

Wood, he explains, contains a myriad of tiny water-conducting channels. By cutting thin slices, he could expose these inner nanostructures, and use them as templates for fabricating things. For instance, plastics might be imprinted with the fine channels’ shapes to create the basic plumbing for devices such as those that help analyze DNA in specks of blood.

It was a clever idea. But an even more interesting possibility—one that would help Xu win a coveted award from the Pew Charitable Trusts earlier this year—occurred to him as he pondered the richly textured surfaces he could explore as a bladesman.

With a microtome, a device akin to a miniature salami slicer that biologists use for cutting very thin pieces of tissues to observe under the microscope, he shaved off sections of bovine tendon tissue. When he examined them, he realized he could expose microscopic features on the surface of collagen—a protein that serves as a scaffold for cell growth, in everything from blood vessels to corneas.

The diagram above shows the fabrication process from tendon to scaffolding with nerve guidance conduits for nerve repairing. Image: Courtesy Qiaobing Xu

Collagen implants have long been used to help heal shattered bones, burns and other injuries. But there’s a problem: The protein’s tough, water-insoluble fibrils make it hard to work with. Because of this, it is typically broken down into a gel with acids or enzymes and then molded into desired shapes. Unfortunately, that wrecks the fibrils’ well-ordered weave, weakening the material and erasing surface features that convey guiding messages to cells. Reconstituted collagen is more of a dumb trellis than a smart guide for cell growth.

Bioengineers have tried to compensate by carving natural-looking surface features into reconstituted collagen with high-end technologies such as laser patterning. But these approaches tend to be costly, yielding only small amounts of imperfectly replicated material.

Xu’s stroke of genius was to see that thin slices of native collagen, obtained by removing cells from tendon and shaving them with a microtome, could be readily shaped into tubes and other structures—a simple, cheap way to manufacture copious amounts of biologically correct material for tissue engineering.

To make his collagen creations especially strong, he stacks squares of the thin-sliced, treated cow tendon, about 1 centimeter on a side, so that fibrils in alternating layers are perpendicular to each other. This basic design is what makes plywood so tough—its adjacent layers are arranged with the wood grain in different directions—and it has enabled Xu to fabricate structures that are sturdier than equivalently sized pieces of native collagen.

Xu, who also has appointments in the School of Medicine and the Sackler School, and graduate engineering student Kyle Alberti have fashioned blood-vessel-like tubes by wrapping the stacked collagen layers around Teflon-coated glass rods. In a recent report, they presented data showing that such tubes can withstand significantly greater internal fluid pressures without bursting than similar ones made of reconstituted collagen—a major plus when structures are to be used for artificial arteries and veins.

Xu’s lab is also developing stacked-layer collagen tubes to guide the regrowth of nerves severed by trauma. The tubes’ intact fibrils could help coax regenerating nerves toward each other to bridge gaps, and toward target muscles to reconnect with them. To expedite this process, Xu plans to lace the tubes with growth-promoting agents using another novel technology he’s developed: microscopic lipid capsules that enclose protein-based drug molecules and ferry them into cells.

All this sounds like a biotech company in the making. But Xu doesn’t expect significant interest from venture capitalists until he demonstrates good results in animal studies. Such research is costly, which makes the $240,000 grant he’ll receive over four years as a Pew Scholar in Biomedical Sciences especially timely.

David Stipp, the author of The Youth Pill: Scientists at the Brink of an Anti-Aging Revolution, is a science writer based in Arlington, Mass.