Punching Above Our Weight

James Stern, E72, A07P, the departing chair of the Board of Trustees, reflects on the rise of Tufts University 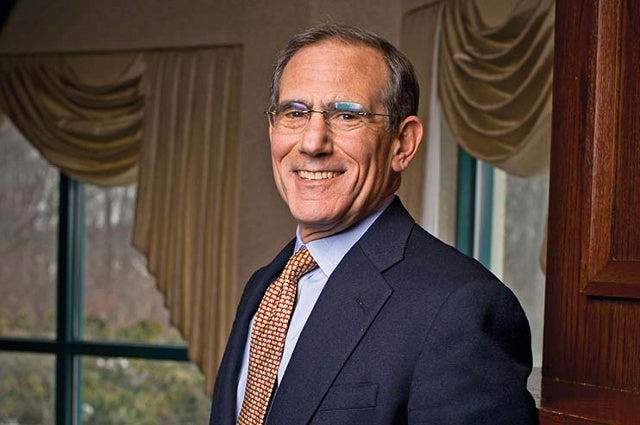 In 1982, at the age of 32, James A. Stern, E72, A07P, became the youngest person ever elected to the Tufts University Board of Trustees. Already successful on Wall Street, he was accustomed to working alongside senior decision makers. Still, he says, “it took a while to learn everything on the board. I was pretty careful to pick my spots to get involved.”

Since then, Stern has guided four Tufts presidents, spearheaded two big fundraising campaigns and made the board more engaged and transparent. He and his wife, Jane, have endowed three professorships at the university and made substantial gifts to boost financial aid. They have also given generously to the annual fund each year.

On Nov. 2, Stern will step down from the board after 31 years, including a decade as its chair. Under his tenure, the university’s endowment has grown to more than 30 times its previous size, from $45.5 million in 1982 to $1.4 billion in 2012. “Since I’ve been on the board, we’ve raised about $2.2 billion,” he says. “While raising the money is significant, what is most important is what the money has done for Tufts, in terms of financial aid, the new facilities and attracting great students and faculty. We’ve gotten into the big leagues.”

The admissions numbers bear him out. In 1982, fewer than 10,000 prospective students applied to Tufts, and 35.6 percent of them were offered admission. By contrast, the class of 2017, which arrived on campus this August, was selected from the largest pool of candidates ever to seek admission to the schools of Arts and Sciences and Engineering—18,420 applicants—with the lowest-ever acceptance rate, 18.8 percent. The students’ SAT scores are higher than ever. The university awarded a record $16.4 million in need-based financial aid to the incoming class—an increase of almost $2 million over last year—with 34.5 percent of the incoming students receiving a Tufts grant.

All this is possible in part because of ambitious fundraising. “In our last two capital campaigns,” Stern says, “we did something that no other research university has ever done. We set fundraising goals that were in excess of our endowment. That’s really punching above your weight.”

As an undergraduate, Stern majored in civil engineering, although he says he wasn’t a natural at the subject and considered transferring out of engineering. Once he decided to stick with it, “somehow, things began to click,” he recalls. “My engineering professors really taught me how to think.”

Stern went on to apply those skills to building institutions, rather than dams and bridges. After Tufts, he headed to Harvard Business School, where he graduated as a Baker Scholar, an honor awarded to the top five percent of the class. He then embarked on a two-decade career with Lehman Brothers. In 1994, he founded The Cypress Group, a New York–based private equity firm that manages funds totaling more than $3.5 billion. He serves as the group’s chairman.

Stern has helped steer Tufts through three decades of change, and has enlivened the campus since his student days. Just ask Sol Gittleman, the former provost who is now the Alice and Nathan Gantcher University Professor. “When Jim was my student more than 40 years ago,” Gittleman says, “his intellect made my classes better. When he returned as a trustee, his insights made the college better. When he became board chair, his mature wisdom made the university better. He has never stopped learning, giving back or making Tufts a better place.”

With characteristic humility, though, Stern says others deserve the credit for the university’s progress. “Through the hard work and vision of four extraordinary presidents and their teams, Tufts is in an entirely different position in the world of higher education than it was when I joined the board,” he explains. “I’ve had a front row seat, and it’s been fun and gratifying to watch.” Here he considers some of the milestones along the way.

1982: James Stern, age 32, joins the Tufts Board of Trustees. “I ran at the urging of a trustee, Earl Littleton, who had been one of my engineering professors. Once there, you couldn’t help but be taken with Jean Mayer, the president. He was a true visionary. It was clear from my first board meeting that he wanted to take Tufts to a different level.”

1985: The Elizabeth Van Huysen Mayer Campus Center opens on the Medford/Somerville campus, and the USDA Human Nutrition Research Center on Aging and the Arthur M. Sackler Center for Health Communications open in Boston. The Campaign for Tufts exceeds its $140 million goal by $5 million. “That campaign was an extraordinary achievement by President Mayer and his team. It was my understanding that the previous capital campaign for Tufts had a goal of $7 million—and that goal was not achieved.”

1992: The New Campaign for Tufts successfully raises more than $250 million. John DiBiaggio is named Tufts’ 11th president. “Jean Mayer did a wonderful job expanding Tufts, but when he retired, the board realized we needed a president who could take control of what we had and manage it. John and his team did that.”

1998: Stern and his wife, Jane, endow the Arthur Stern, Jr., Professorship in American History—establishing a pattern of generous support that will later include $10 million to endow two more professorships in the schools of Arts and Sciences and Engineering and to support financial aid. “What could be more important to the core mission of Tufts? This year, for example, there are 25 Stern scholars on campus. It’s something Jane and I are very proud of. You hope there’s a multiplier effect. If you influence the lives of 25, and then they influence the lives of 25 more—that could have a significant impact.”

1999: The Gantcher Family Sports and Convocation Center opens, housing a 200-meter track, four tennis courts and seating for 6,000. “The athletic facilities, even 45 years ago, I would describe as quaint—which we know is a euphemism for needing improvement. Gantcher was a critical first step.”

2001: Lawrence Bacow is named Tufts’ 12th president. “Larry recognized that Tufts had arrived at a new level, and gave us the foundational tools to ascend even higher. Larry reduced it to a simple concept: a great university is comprised of great students and great faculty. The core of his mission was increasing accessibility and attracting world-class faculty. On top of that, he and I recognized that the quality of a university can only be as great as the quality of its board. We now have an unbelievably strong board, with a level of engagement that other schools envy.”

2002: The Tufts Tomorrow campaign—the largest fundraising effort in the university’s history to date—is concluded, having raised more than $609 million since it began in 1995. “The original goal of the campaign was $400 million, which at the time we thought was ambitious. What an amazing accomplishment.”

2003: The President’s Marathon Challenge team runs its first Boston Marathon to support nutrition, medical and fitness programs at Tufts. Stern becomes chair of the Board of Trustees. “The Marathon Challenge was about the fundraising, but it also brought together our commitments to wellness and nutrition. In some respects, it was way ahead of its time.”

2007: Tufts announces that it is replacing loans with grants for all incoming students from households with incomes below $40,000. “It’s a step in the right direction. The amount of money we’ve raised and given to financial aid is never enough.”

2011: Beyond Boundaries: The Campaign for Tufts, which launched in 2006, exceeds its $1.2 billion goal. “It was a stunning achievement, especially in light of how dramatically the fundraising environment changed beginning in 2008.” Anthony P. Monaco starts work as Tufts’ 13th president. “Tony is an extraordinary talent. I really have never been more confident about the leadership and future direction of the school.”

2013: Stern hands the reins to the incoming board chair, Peter R. Dolan, A78, A08P. “Many of the issues he will face are the same. How do you propel the university to new heights with a restricted pocketbook? Schools with whom we compete for students have endowments that are twice ours. We have to pedal faster, pedal harder.”