John Berg, a veterinary surgeon at Tufts, is testing the experimental technique on canine patients, hoping to raise survival rates

When a tumor is surgically removed, there’s always a chance the cancer will return. Even the tiniest bit of malignancy left behind creates a pathway for the disease to recur—often within a couple of months.

“The problem in both human and veterinary medicine is that we can’t tell if we’ve gotten microscopic bits of tumor out, because we can’t see them,” says John Berg, a veterinary surgeon at Tufts.

Berg’s clinical research could one day lessen the odds that a cancer will come back—in both animals and humans. He’s testing a new surgical tool developed by researchers at MIT that will let doctors know whether even a single malignant cell remains—while the patient is still in the operating room. 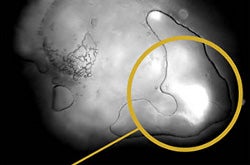 Exposed to the fluorescent drug, the cancerous cells in this tumor “light up” white or light gray, while the normal tissue remains black. Photo: Courtesy of Lumicell Diagnostics
Dogs undergoing surgery for soft-tissue sarcoma and a common skin cancer known as a mast cell tumor—both of which recur at high rates if not completely removed—are injected with a drug containing a fluorescent dye that acts like a cancer-illuminating spotlight during the operation.

Administered 24 hours before surgery, the drug is made of a protein bound to two fluorescent molecules. Cancer cells have an inordinately large number of enzymes, which act as biological switches when they come into contact with the drug, causing the malignant cells to light up. “The fluorescent dye remains in cancer cells for about 48 hours or so,” says Berg, “so we can distinguish cancer cells from normal cells when we do surgery the next day.”

Once the tumor is removed, the surgeon aims a specially designed camera at the surgical site where the cancer once thrived. The camera emits a beam of fluorescent light: “If we see fluorescence, we’ve left tumor [cells] behind,” says Berg. The glowing areas “pinpoint where we need to remove any residual cancer.”

Preliminary results on 20 dogs are promising, Berg says. “What we’ve learned is that the technology is very good at distinguishing cancer from normal tissue. It does that with a high degree of accuracy,” he notes. “What we haven’t yet proven is if it will allow us to see microscopic quantities of tumor. That’s because with most of the dogs we’ve treated, we’ve been able to make a very wide incision around the cancer, allowing us to remove the entire tumor.”

To assess whether the surgical cancer detector lives up to its claim of being able to sniff out as little as one lingering cancerous cell, Berg plans to conduct a larger study. “We’re probably five to 10 years from this technology being a reality in regular practice,” he says, “but I think it has tremendous promise for both animals and humans.”