When this Tufts dental student learned he needed a transplant, his world changed—but his determination to stay in school did not 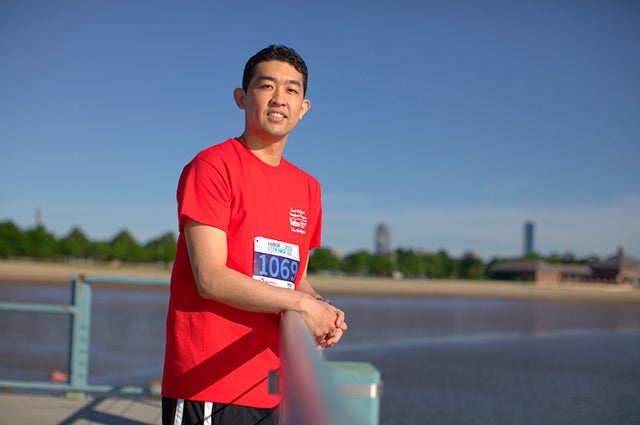 Shoji Inomata, D15, didn’t feel good. The second-year dental student was short of breath, and his heart was beating erratically. He knew something was very wrong. But when he walked into the emergency room at Tufts Medical Center in January 2012, he never imagined he’d be in the hospital for 256 days.

Just 25 years old, with no history of cardiac problems, Inomata’s heart was failing. And after a seven-month wait for a donor, Inomata was one of 17 adults to undergo a heart transplant in 2012 at Tufts Medical Center, which performed more of these surgeries than any other hospital in Massachusetts last year.

Before he got sick, Inomata, a fit young man raised in California, loved cycling and hiking, “anything outdoors,” he says. His sudden illness, doctors told him, was likely a complication of a viral infection. Inomata had just gotten over the flu, which, in rare instances, can cause damage to the heart muscle, a condition called cardiomyopathy.

In Inomata’s case, both of his ventricles, the chambers in the lower portion of the heart that pump blood through the body, had become too weak to do their job. Hassan Rastegar, director of adult cardiac surgery at Tufts Medical Center and a professor of surgery at the School of Medicine, fitted him with something called a biventricular assist device, BiVAD for short. It’s a machine about the size of a carry-on suitcase that does the work of failing ventricles.

The BiVAD procedure was hard on Inomata. His mother flew out from California and took up residence in her son’s Boston apartment; his father made the cross-country trip every three weeks for the next several months. The hope was that the BiVAD would give Inomata’s heart a brief vacation during which it could repair itself. But after two weeks on the mechanical pump, he hadn’t improved. Inomata needed a new heart.

When his name went on the national waiting list for a heart transplant, doctors told him the wait averaged two to six months. There are approximately 3,000 patients on the list, but only 2,000 donor hearts become available each year, according to the National Heart, Lung and Blood Institute. While he waited, he remained hooked up to his BiVAD at Tufts Medical Center.

But Inomata, who matriculated as a member of the class of 2014, didn’t let that get in the way of his dental education. For the rest of the spring 2012 semester, he kept up with his classes by watching lectures captured on TUSK, the online Tufts University Sciences Knowledgebase.

Inomata credits David DeNofrio, M88, an associate clinical professor at Tufts Medical School and the cardiologist who oversaw his care, with helping him keep up with his coursework.

“He gave me many options and flexibility in continuing my education. If he hadn’t been so caring and open-minded, I’m sure my education would have been on pause during my hospitalization,” says Inomata, who continues to see DeNofrio on a regular basis.

In May, Inomata started attending classes at the dental school, his BiVAD in tow. It was a step he couldn’t have made without his classmates. For his excursions outside the hospital, Inomata had to be accompanied by at least one person who could assist him if the mechanical device malfunctioned. He needed someone who knew how to free him from the machine and use a manual pump to keep his heart beating.

Inomata’s friend, Michelle Webb, D14, helped recruit 20 of their classmates. The students went through an hour-long training with a nurse to learn how to help Inomata in an emergency.

“It was a reality check,” says Webb. “None of us had been in the [dental] clinic yet, so we weren’t sure what to expect. It was our first face-to-face contact with what it’s really like to take care of someone.”

Seven months after he went on the transplant wait list, a heart became available, but Inomata says he was too physically and emotionally exhausted to rejoice. He knew that most transplant hopefuls experience at least one false alarm: Sometimes a heart becomes available, but gets damaged during the surgery to remove it, or the organ turns out not to be a match for its intended recipient.

Inomata was spared that false hope. He remembers waking up in the hospital on September 24, 2012, unaccompanied by the rhythmic, mechanical sound of his BiVAD. “I missed it a little,” he says. “I had adjusted to the situation and had been comfortable.”

The first days with his new heart, though, were far from comfortable. “I could hardly breathe,” he says. He felt sick from the barrage of medications he was on, including the immune-suppressing drugs he’ll have to stay on for the rest of his life to prevent his body from rejecting his new heart. The incisions took months to heal, restricting his movement and activity. Now that the wounds have closed up, “it just looks like I have five belly buttons,” he says. 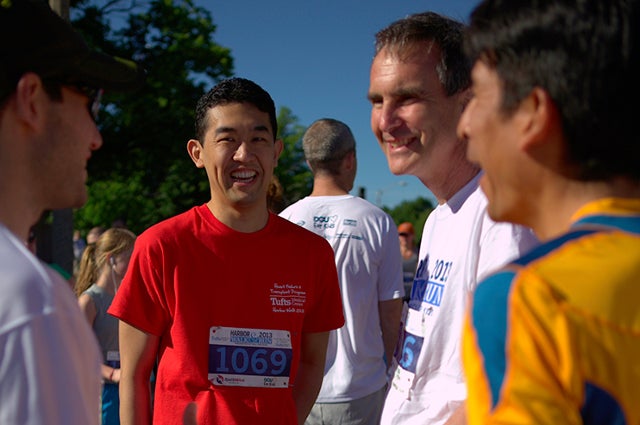 In June, not quite nine months after the life-saving surgery, Inomata participated in the 11th annual Harbor Walk & Run, a 5K along the South Boston waterfront that raises money for Tufts Medical Center and the Floating Hospital for Children. Inomata finished the 3.2-mile race, raising $1,100 for Tufts’ cardiac transplant center. He hopes his accomplishment will let other heart patients know it is possible to reclaim what he calls their “regular” lives.

“I know I could do better,” he said of his race, “but I was just happy to complete it. I’m amazed at my own recovery after going through 14 hours of surgery.”

Inomata wasn’t the only one in awe. “I was shocked to see him at the race,” says Kenneth Warner, chief of Tufts Medical Center’s cardiothoracic surgery division, who performed Inomata’s transplant. Warner, an associate professor at Tufts Medical School, has run in the Harbor Walk & Run for nearly a decade.

For most people, physical exertion makes the heart beat faster. The increased blood flow brings more oxygen to the hard-working muscle tissues. But in transplant patients, the heart’s been disconnected from the nervous system. It never gets the message that the body is exercising, so it doesn’t respond by beating faster on its own. That Inomata was able to participate in the race at all is “quite an amazing feat,” says Warner.

Warner has performed roughly 200 heart transplants over his career and says he doesn’t recall having a Tufts student as a patient. “We considered him one of us, part of the family,” he says. “We treat all our patients like that, but this one truly was one of the family.”

Inomata, who turned 27 in June, knows he’s one of the lucky ones. While he waited for a heart, he became friends with another young man, Sammy, also on the transplant wait list. Sammy never got his new heart. He passed away after waiting more than a year—one of the 18 patients who die every day because there aren’t enough organ donors, according to the U.S. Department of Health and Human Services. Inomata hopes telling his own story will encourage more people to become donors.

He continues to inspire others at Tufts. On June 30, a team of nine students, faculty and staff from the School of Dental Medicine climbed 50 flights of stairs in Boston’s Prudential Center for a heart-disease fundraiser called ClimbAmerica! In his honor, the group dubbed themselves “Team Shoji.” They plan to climb again in January to continue to raise awareness, says Yun Saksena, DI00, an associate clinical professor of diagnosis and health promotion.

“I hope we inspired a few people,” she says. “Shoji’s a humble guy. His comeback is pretty impressive.”