Mikheil Saakashvili, who led his country from 2004 to 2013, will be a senior statesman at Tufts

Mikheil Saakashvili, who served as president of the Republic of Georgia from 2004 until last month, will join the Fletcher School in January as senior statesman for the spring semester. In this role, Saakashvili, who founded Georgia’s United National Movement Party, will give major addresses and lectures on European governance and other contemporary international and regional issues.

“We welcome President Saakashvili, the leader of the Rose Revolution, to the Fletcher and Tufts community,” says James Stavridis, dean of the Fletcher School. “He is an accomplished leader and statesman, renowned for changing the course of his country’s history and moving it strongly into the trans-Atlantic community, as well as for his impact on the region and indeed the world.” 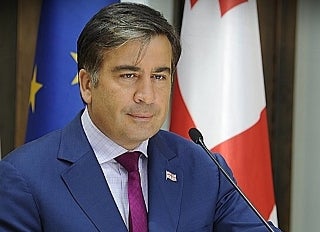 “I am very honored to be working with the Fletcher School of Law and Diplomacy, one of the greatest institutions specialized in these fields in the world,” says Mikheil Saakashvili.
At age 37, Saakashvili became the youngest national president elected in Europe following the bloodless Rose Revolution that ousted his predecessor, President Eduard Shevardnadze. Saakashvili served two terms—the maximum allowable—before stepping down in November. The United National Movement Party he established supports closer ties with NATO and the European Union.

In 2005, Saakashvili was nominated for the Nobel Peace Prize by U.S. Senators Hillary Clinton (D-N.Y.) and John McCain (R-Ariz.). The two praised his “extraordinary commitment to peace . . . to the universal values of democracy, individual liberty and civil rights.” They added that “because of [Saakashvili’s] efforts, the people of Georgia are now constructing new societies based on the rule of law [and] . . . resolving peacefully the complex ethnic and social issues that have in the past threatened to divide their nations.”

Saakashvili began his career in Georgian politics in 1995 as an elected member of parliament. In 2000, he was appointed Georgia’s minister of justice and focused on investigating and exposing government corruption and instituting judicial reforms.

A lawyer by training, Saakashvili graduated with honors from the prestigious Kiev University Institute of International Relations and received a master of laws degree from Columbia University. He studied law at the doctoral level at the George Washington University National Center of Law in Washington, D.C. In 1995, he became the first former Soviet citizen to obtain a diploma in Comparative Law of Human Rights from the International Institute of Human Rights in Strasbourg, France.

“I am very honored to be working with the Fletcher School of Law and Diplomacy, one of the greatest institutions specialized in these fields in the world,” says Saakashvili. “I am back to my roots, as my educational background has everything to do with law and diplomacy. I will also get a chance to share the practical experience I acquired throughout the last several years.”