School of Medicine steps up its recruitment of top-notch foreign medical graduates to give them opportunities for U.S. residencies 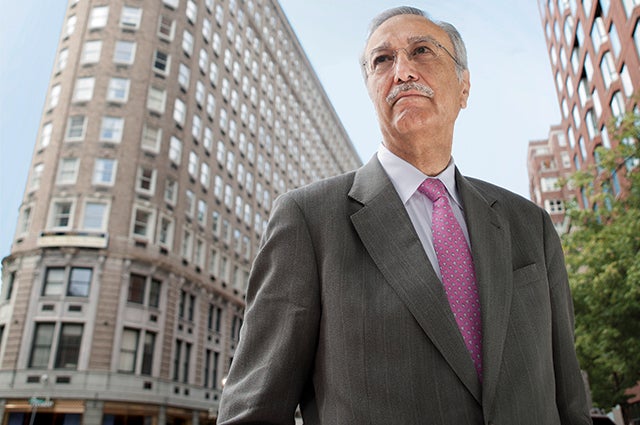 Asked to name a few places where his plane has touched down recently, the man in the trim, dark suit replies, “India, Korea, South Africa, Australia. . .” and keeps on going for another five or six countries without drawing a breath. Tej Maini is a traveling man. As dean of international affairs at the medical school, he is engaged in something like a permanent recruitment effort abroad.

What he’s seeking are the top-notch foreign medical school graduates and researchers who are willing, able and eager to come to the United States and extend their education within a network of Tufts-affiliated hospitals.

Most are coming for residencies and fellowships that last between one and seven years. Because American medicine in 2013 is considered the world’s gold standard, visiting students hope to pick up the latest developments in their respective fields while gaining the luster of U.S. training. In the case of some nations, most notably Saudi Arabia, the government pays all travel and living expenses for their medical graduates who land residency positions abroad.

Right now, Saudi Arabia lies at the heart of the contest among American medical schools. According to Maini, the oil-rich nation has committed to spending 25 percent of its GDP on higher education in the years to come. Naturally, the competition for that money is fierce. “If this is the pie,” says Maini, holding his hands apart, “there are many birds flying in to peck at the pie.”

Each year roughly 25,000 residency slots are available in American hospitals and medical centers. Of these, about 20,000 are taken by graduates of U.S. medical schools, and the rest are filled by foreign medical school graduates.

The total number of applicants increases every year, from both domestic and foreign sources. Four new American medical schools recently graduated their first classes, adding about 1,000 students to the mix, and existing U.S. medical schools are on track to boost enrollment by 30 percent, according to the Association of American Medical Colleges (AAMC). International medical students and graduates contributed 740 more residency applicants in 2013 than the previous year.

Both the American Medical Association and the AAMC support bills introduced in Congress that would add some 15,000 Medicare-financed residency positions over four years, while reserving spots for specialists in such critical-need areas as primary and geriatric care. Although 2013 was the most competitive ever for placements, this year’s residency match rate was the highest in history, with 99.4 percent of positions filled, according to the National Residency Matching Program.

Against this backdrop, the payoffs for U.S. hospitals in the placement of foreign medical students are considerable, Maini explains. Each resident would normally cost the hospital about $60,000 a year, including a monthly stipend and benefits. However, in the case of an applicant from a country like Saudi Arabia, this cost disappears. By agreeing to “sponsor” an applicant, Saudi Arabia pays the hospital directly, which in turn funds the resident. It’s basic arithmetic. The more state-sponsored foreign residents a hospital can attract, the more the budget-friendly gains accrue. 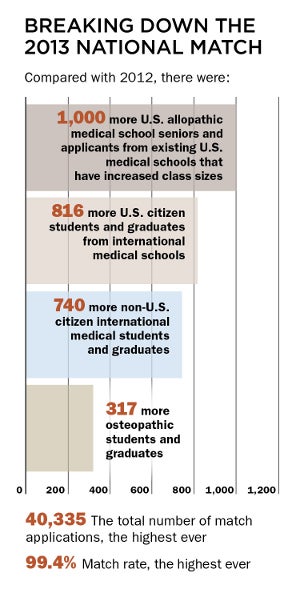 Each year, Maini and his staff of four typically place about 20 foreign residents among a network of 10 Tufts-affiliated hospitals. Tufts Medical Center (TMC), St. Elizabeth’s Medical Center and Baystate Medical Center generally dominate the field. In 2013, of 98 total placements—including those admitted in previous years—the three giants claimed 42, 19 and 14 residents, respectively. For each resident placed, the sponsor provides a payment to Tufts Medical School in compensation.

Attracting the applicants is not as easy as it sounds. Maini, who was born in India but trained in Boston, spends much of his life on the road, visiting foreign countries and attempting to cultivate the relationships that may yield dividends later. “International business is a slow business,” he says. “It takes from five to 10 years to build a relationship, and unless you are aware of the nuances, you are likely to stumble.”

Maini, a vascular surgeon, knows the ropes as well as any outsider can. Between 2008 and 2011, when he was employed by the Cleveland Clinic in a managerial role, he helped develop the organization’s international expansion strategy. This included creating a new, world-class hospital in Abu Dhabi, United Arab Emirates, from scratch. Before that, while serving as president and CEO of Fallon Health and leading a dramatic turnaround in the fortunes of that health-care insurer based in central Massachusetts, he traveled abroad frequently to explore the endless cultural variations of global health.

That experience lends Maini a heightened sensitivity to what foreign-born students see when they glance toward the horizon. “International medical students do not understand the U.S. medical system,” he says with the voice of experience, “and so you have to walk them through every step.”

Examples? “If you say there’s a $100 fee for the application, they don’t send it in. They’re in a different mind-set,” Maini says. “If you ask for a photo with the application, you have to say what kind of photo is appropriate. We’ve had people sending in shots of themselves in tank tops.” Maini’s office takes applicants by the hand and leads them through the hoops of securing visas, taking and passing required medical licensing exams and settling into their new culture.

Deeply embedded cultural biases may need some adjustment. Those from traditional Middle Eastern cultures are often not comfortable being asked to report to women, for example. Nurses may be considered subordinates by them, “whereas here in this country, we consider nurses to be our colleagues,” says Maini.

It helps that the medical school’s Office of International Affairs resembles a mini-United Nations. Among them, the five staffers speak seven languages: Arabic, English, French, Spanish, Urdu, Hindi and Punjabi. Collectively, they have earned degrees in the United States, India, France and Morocco. All of this far-flung expertise adds up to human sympathy of a valuable kind. “Coming to this country was not so much a culture shock for me, because I came from a very progressive family,” Maini observes. “But I do know what someone goes through when he or she enters another country for training. It takes a while getting used to it.”

In the year that Maini has been in charge, he has sought to professionalize the office—by improving the quality of its website, among other moves—and broaden its reach. Of the current crop of foreign residents and scholars that he has brought to Tufts, almost all hail from a concentrated area of countries in the Middle East. Lately, more and more, Maini is booking flights to other regions of the world, noting, “I’m trying to diversify the portfolio.”

For foreign medical graduates at Tufts who have waved goodbye to one continent and traveled thousands of miles to another in search of self-advancement, the journey sounds well worth the dislocation. 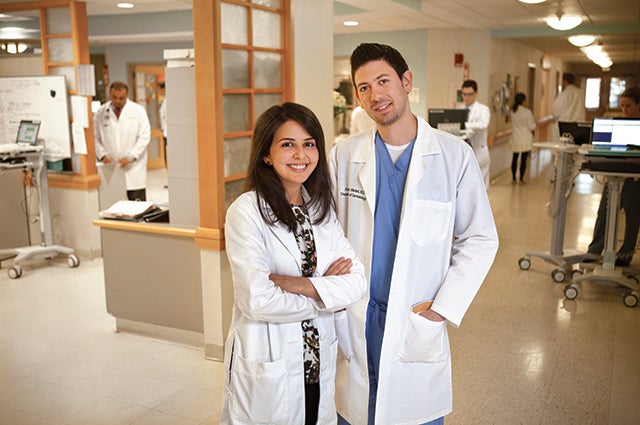 Nujud Daham and her husband, Abdulaziz Madani, met in medical school in Saudi Arabia and came to the U.S. for advanced training. Photo: John Soares
Abdulaziz Madani, 28, is a prime example. He says he heard positive things about Tufts Medical Center from friends back home in Saudi Arabia and decided to heed their advice. He’s now a resident in dermatology at TMC and living in Boston with his wife, Nujud Daham, an intern in the surgery/dermatology program at TMC. The two met in medical school at King Saud University in Riyadh on a dermatology rotation. As Madani puts it wryly, “It’s been dermatology all the way with us.”

Neither member of this pair is the wide-eyed newcomer you might expect. Madani was born in Fairfax, Va., and spent every summer in the United States, frequently accompanying his father on trips to Texas for his dad’s medical treatment at a facility in Houston. For her part, Daham first came to Boston as a medical student in 2009 to take an elective at Harvard Medical School; she loved the city and vowed to return as soon as she could.

Both husband and wife attest that venturing to the United States for medical training remains a desirable option, with considerable prestige. “People in Saudi Arabia face a tough choice when they graduate from medical school,” Madani explains. They generally need, first, to identify and then be admitted to a high-quality medical training program either in the United States or Canada if they are serious about bolstering their careers. “Going to the U.S. has that reputation,” he says.

Daham comments that, compared with educational approaches back home, the United States stands apart. Saudi Arabia uses a pure lecture style in the classroom, abetted by copious handouts of printed material, akin to what American medical schools might have been doing 30 or 40 years ago. “Here they teach you to self-educate,” she says. “You have to look up everything they are teaching you, which helps you to understand.”

Ibrahim Abushoshah, a surgical resident at Tufts Medical Center, sees another distinction. “The advancements are better established here,” he asserts. When he returns home in a few years, after completing his first-rate training, the Saudi government will expect him to act as a teaching assistant at a local medical school—to “pay it forward,” in effect—for a term equal to the number of years spent abroad on the nation’s dime.

For now, Madani and Daham live in an apartment a block or two away from Tufts Medical Center and are swept up in the frenzied schedule that a double regimen of medical training entails. They have a one-year-old son who’s momentarily caught between cultures, absorbing and transcending them bit by bit, just as his parents are. “He was born here,” his mother comments, before adding with a laugh, “and he’s growing into it.”

This article first appeared in the Fall 2013 issue of Tufts Medicine magazine.