Cutting Through the Rhetoric on Hunters vs. Wildlife

To control the encroachment of deer and other troublesome animals, we need to separate the science from media hype, says Tufts policy expert 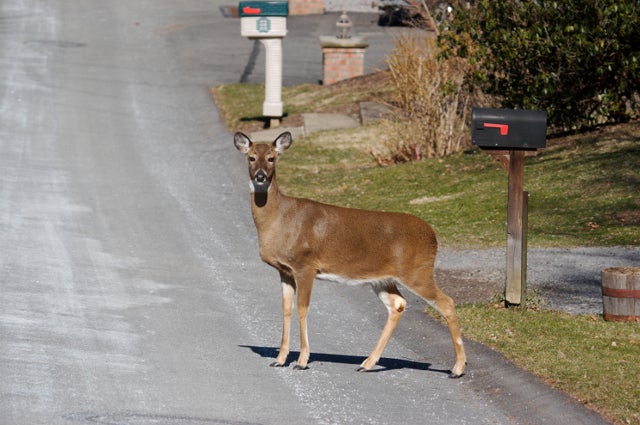 The recent Time magazine cover story “America’s Pest Problem (Time to Cull the Herd)” pairs a provocative headline with a photograph of a slender white-tailed doe in a dewy wood. Although not a regular reader of the publication, I was sucked in. I’ve been helping communities resolve conflicts with deer and other wildlife for more than two decades, and my research focuses on the use of contraception to control suburban deer populations. I was fairly confident that I was not going to like what Time had to say. The article did not disappoint.

Scientists like me often are frustrated by how the media cover science. One colleague, despite—or because of—40 years of regular misrepresentation of his work in the media and online, invariably responds to these provocations with furious all-caps emails. SHOW ME YOUR DATA! he fumes.

There are many good reasons why even fair-minded journalists get the science wrong. Science is complex, and many reporters lack context and often work on tight deadlines. But in my experience, the problems that most aggravate scientists lie in the packaging. In the media, and generally in public discourse, messy, complicated data are interpreted and reimagined as small, self-contained stories, which, in turn, are folded into a myth that conveys a moral message or a framework for thinking about the world.

The reimagined stories may be consistent with data, or not. But one way or another, they must support the framing story. Hence our frustration as researchers: We believe the story is supposed to fit the data, not the other way around. In this case, the Time article got our small piece of the science wrong, but it had to get our science wrong for the framing story to remain intact. 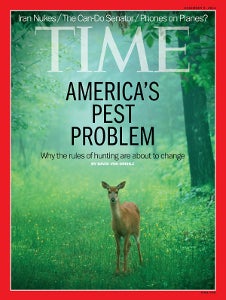 Here are the themes of Time’s framing story. After North American wildlife was decimated by habitat destruction, hunting and systematic destruction of predators through the 19th century, many species regained a foothold in the 20th century as a result of the enforcement of restrictions on hunting, self-policing by sport hunters embracing a “fair chase” ethic and reforestation. Because animals such as deer, Canada geese, black bears and coyotes have adapted very well to human-induced changes in the environment, they have become pests. To restore the delicate ecological balance, we must either allow dangerous predators like wolves and mountain lions to return, or provide “pushback from the No. 1 predator of them all”—human hunters—to repel the tide of pests. “This is nature’s way: an equilibrium of prey and predator, life and death,” says Time. The unavoidable conclusion: Hunters must kill more wildlife.

A set of smaller stories is enlisted to support the hunters-as-predators-restoring-the-natural-balance framing story. The menace of intruding wildlife is represented by a series of photographs of deer, moose, turkeys and even an alligator making themselves at home in our houses, with accompanying anecdotes. Black bear intrusions in the New Jersey suburbs are featured. A chilling anecdote is told about a Michigan motorcyclist and a motorist killed by the same deer, the motorcyclist by a collision with it and the motorist by swerving off the road after seeing the motorcyclist’s body and being thrown from his car. The Time writer even finds a story of a bald eagle that snacks on backyard pets.

To close the deal, the article highlights communities that are expanding hunting to control wildlife. Two successes are described: a New Jersey bear hunt, which is credited with reducing bear populations by 20 percent statewide, and an archery hunt in Indiana, which was associated with a reduction in vehicle collisions with deer. Communities in other states, including California, Illinois and North Carolina, are also allowing more hunting. No shades of gray, no uncertainties about correlation and causality, or concerns about cherry-picking supporting examples: We must hunt.

Our research group in Tufts’ Center for Animals and Public Policy has helped to develop, test and apply non-lethal solutions, including contraception, to control wildlife. But research like ours had to be dismissed in order for this framing story to remain coherent. The article does so in three paragraphs. First it suggests that bear-proofing garbage cans, removing bird feeders and taking other steps to make food less accessible to wildlife is crueler than hunting because animals will starve to death. It then takes only two sentences to dispense with contraception solutions, alluding to our work: “…the most effective birth-control technique—medicated darts—works only on captive populations.”

Our research group has published data in Wildlife Research and the Journal of Zoo and Wildlife Medicine from three field sites—Fire Island National Seashore in New York, the campus of the National Institute of Standards and Technology in Maryland and Fripp Island in South Carolina—that demonstrate that the use of our “medicated darts” leads to reductions in local deer populations of 30 to 60 percent. To accomplish these reductions, we capture and ear-tag suburban deer—the ear-tagging is more for research and regulatory purposes than for population control—and then hand-inject or dart them with our contraceptive vaccine. The vaccine, which lasts at least two years with a single treatment, has no harmful side effects and does not affect ongoing pregnancies.

While deer populations on all three sites are partly constrained in their movements, they are by no stretch of the imagination “captive.” In fact, our newest study, at Hastings-on-Hudson, N.Y., where work is just beginning, will specifically ask whether we can treat enough female deer with our vaccine to reduce the village’s population, offsetting any migration of deer from surrounding communities. Time will tell.

But the argument over what “captive” means doesn’t matter. To make the framing story work, something must disqualify contraception as a solution. If it weren’t captivity, it would have to be something else: it’s experimental, it’s impractical, it’s too expensive.

To be sure, other framing stories have been written about human-wildlife conflicts. A favorite of the animal advocacy community is the “peaceable kingdom” myth. In this view, wildlife populations will naturally come into balance with their ecosystems. Humans are the intruders here—we’ve destroyed wildlife habitat for our own purposes, and human intervention will only make the situation worse. A set of situations can be constructed to support this framing story, too, no more or less consistent with the data than those enlisted to support the hunters-balancing-the-ecosystem story.

Policy debates about wildlife control often play out as the public struggles to reconcile the proponents of competing myths. This can be frustrating to scientists, who want to see their research used to advance constructive solutions. For me, the silver lining has been that in every community in which I have worked, I have found pragmatic, thoughtful, energized individuals who are not distracted by the public posturing, and given good information, they can move things in a productive direction. The trick is to ignore the noise and find those people.

Allen Rutberg is director of the Center for Animals and Public Policy at the Cummings School of Veterinary Medicine at Tufts.