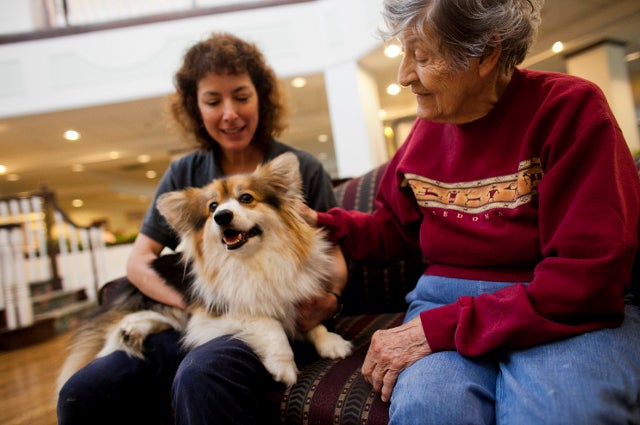 Outside the assisted-living complex, Penny and Boo act like any dogs their age. Full of energy, 2-year-old Penny bounces around the sidewalk, antics that seem to mildly irritate the more dignified Boo, 7.

But when the two dogs head inside with their owners, Lisa Freeman and Debra Gibbs, they are all business. As members of the Tufts Paws for People pet-visitation team, they’re on a mission to deliver the comforting benefits of the human-animal bond.

“Oh, you make me feel so young,” one woman coos to Penny. She looks wistful as she tells Freeman, J86, V91, N96, a professor at the Cummings School, about her old dog, which kept her company when her husband was away on business after the couple first married. When she hugs Penny tight, the Corgi nuzzles her face.

The soothing presence of an animal also helps people cope with larger tragedy: Paws for People provided pet therapy to hundreds of people after the Sandy Hook school shootings and the Boston marathon bombings. More typically, though, the program’s 70 volunteers and their pets visit nursing homes, hospitals, elementary schools and libraries.

Oxford House, a residential facility in Oxford, Mass., for teen boys with behavioral problems, has welcomed Paws for People for eight years. “We’ve found that pet therapy is a great way to help them deal with some of their issues,” says the group home’s director, Deborah Jensen-Sanborn. “Overall, the kids are just more relaxed around animals, which makes it easier to communicate with them.”

“Those of us who do visitations with our animals know pet therapy is beneficial,” says Deb Linder, V09, a Tufts veterinary nutritionist who volunteers with her mixed-breed shelter dog, MD. “I’ve seen it in my own family, which is how I got started in pet therapy. My grandmother refused to interact with nurses or other residents at her nursing home, except when I brought MD in for a visit. She suddenly became the social butterfly of the home, introducing everyone to us.”

Now, veterinary school researchers are backing up those observations with research about pet visitation, with the goal of turning anecdotes into evidence of its therapeutic value.

“We need to ask questions about how pet visitation affects physical and mental health” to understand the benefits and ideal frequency, says Linder. “Is a half an hour a month enough for someone in a particular situation? Or do they need to be visited more than that? When is pet ownership more valuable than visitation?”

For starters, Paws for People conducted a study in 2010 of a summer reading program in the Grafton Public Library that evaluated the benefits of children reading aloud to dogs. The study found that kids who did this improved their reading skills compared with those who read to human volunteers. Paws for People now offers reading programs at numerous area libraries and is following up on the initial study with one at an after-school program in Grafton.

Trained to Be Cool 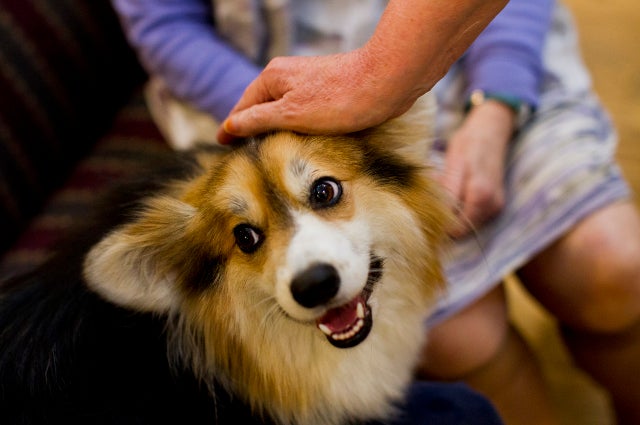 Penny visits residents at the New Horizon’s Assisted Living Community in Marlborough, Mass. Photo: Dominick Reuter
More organizations and individuals are offering pet visitation because of increasing demand, says Freeman, but not all programs are equal.

A few years after its founding in 2005, Paws for People became the Massachusetts affiliate of the national Pet Partners program, which established the first standards-based visitation program in 1991. Now it has more than 11,000 animal therapy teams in all 50 states and 13 countries.

Many owners have friendly pets, but bringing those animals into contact with anxious, angry or unpredictable strangers in an unfamiliar environment requires a great deal of preparation for the animal and handler.

The only pet therapy animal that will never get unsettled on a visit is a stuffed animal, says Linder. “There’s no such thing as a fool-proof dog, and even a perfectly trained therapy animal could have negative effects without a handler who is just as well trained,” she says. “It’s like a Ferrari being driven by someone who only has their learner’s permit.”

Tufts chose to affiliate with Pet Partners because it has the highest standards for handler training. An eight-hour course teaches animal owners how to work with people ranging from preschoolers to seniors with dementia, as well as how to recognize signs of stress in their pets and the people they are visiting.

Tufts also aligned with Pet Partners because the organization allows animals other than dogs to participate. The Tufts Paws for People teams include two miniature horses, a cat, a rabbit and a guinea pig, in addition to dogs. “Basically we can evaluate any domestic species based on known stress behaviors,” says Debra Gibbs, a veterinary technician at Tufts and coordinator of Paws for People.

On a recent evaluation day, 13 human-animal teams showed up for the program’s 22-part skills and aptitude test, which pits candidates against stressors common during pet visits. Animals have to keep their cool when someone drops crutches nearby and submit to clumsy petting and remain relaxed in a boisterous crowd.

Autumn, a one-eyed gray tabby auditioning for the Tufts team, didn’t flinch when two volunteers pretending to be enthusiastic children ruffled its fur the wrong way. As its owner, Stephanie Nataro, passed her cat from volunteer to volunteer, Autumn remained on every lap without needing to be held or petted—the feline obedience equivalent of a dog staying on command.

The tabby passed with flying colors, and Nataro said she hopes to bring her cat to visit children in hospitals, because it’s so good around her 2-year-old daughter and her rambunctious playmates. “I also thought her vision disability might make her a comfort to people with physical disabilities.”

Tufts Paws for People takes measures to reduce the risk of people getting sick during pet visits. “Often we are working with people who have suppressed immune systems,” says Linder. “We need to stay five steps ahead of any potential problems.”

Pet Partners is the national organization with the most rigorous health requirements. To volunteer with the Tufts group, all owners must bathe their pets within 24 hours of a visit to reduce bacteria and allergen-laden saliva on their coats. The miniature horses in the Tufts program wear special booties to avoid tracking in dirt from the street. Paws for People animals cannot be fed a raw meat diet due to the increased risk of spreading diseases such as salmonella—a policy initiated by the Cummings School and adopted by the national Pet Partners program in 2010.

Some people who inquire about volunteering with Paws for People ultimately decide the preparation is too time-consuming, notes Gibbs.

Sue Marino, who visits with her dog Nemo, understands. It takes her three hours to wash, blow dry and brush the 135-pound Newfoundland’s long coat prior to a visit. “And sometimes you’re so tired when you get home from work that you don’t feel like heading out again,” she says. “But then you get there, and something happens that makes it all worth it.”

She describes a 14-year-old boy she and her former therapy dog, Carmel, met at Westborough State Hospital: “He had spent his whole life in foster care, never experiencing physical affection from a parent. Counselors [at the hospital] aren’t allowed to hug patients. But my dog immediately leans in and licks him. Carmel was able to give that boy something that nobody else can.”