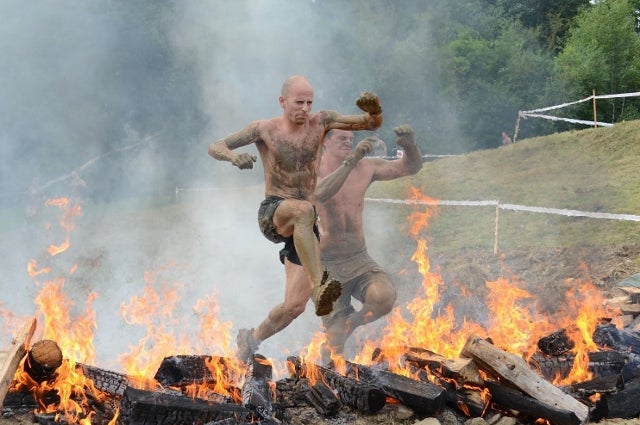 In the fourth of an occasional series, Tufts Now explores the hidden talents of Tufts faculty and staff.

“There was another steep climb and muddy descent … and then we came to the first major obstacle, the 60-pound sandbag carry. I could see I had a decent lead, with several runners close together in a chase pack.... I didn’t slip at all on the greasy climb up the ski slope. Usually these types of carries are 100- to 300-foot climbs, but this one, with a sandbag that weighs about half my weight, went 500 feet up the mountain. My luck ran out on the trip back down, when I fell three times. Falling with a 60-pound bag of sand on your shoulder does funny things to your spine, and they are not good. I could tell this was going to be a long day.”—from Ben Nephew’s account of the Spartan Ultra Beast World Championship, Killington Ski Resort, Sept. 21, 2013

Ben Nephew, G03, is an ultrarunner. He has run the length of Rhode Island, north to south. He has traversed New Hampshire’s Presidential Range in what is the fastest known time for that endeavor: 4 hours, 34 minutes and 36 seconds. He participates in what are aptly called Spartan Races, including the “Ultra Beast,” a 30-mile race that, the year he ran it, included such obstacles as crawling under barbed wire and hoisting a five-gallon bucket filled with stones down a steep, muddy slope. All in cold rain.

Do people call him crazy? “Yes, some people do,” says Nephew. In his sport, races are always longer than a standard 26.2-mile marathon.

Nephew, who earned his Ph.D. in biology from Tufts in 2003, is an assistant professor at the Cummings School of Veterinary Medicine. He studies the effects of chronic stress on behavior and physiology, with the goal of finding new treatments for disorders such as depression and anxiety. In 2013 he won the veterinary school’s inaugural Junior Faculty Research Award, which recognizes a junior faculty member who is making excellent progress in establishing an independent research program.

If you had to pick him out of a crowd, he’d be easy to spot: he’s the small, muscular one with a shaved head and not an ounce of body fat. He is modest about his accomplishments and makes some of his races sound like a jog around the block. They are anything but. Type Ben Nephew's name into Google search, and you’ll see numerous accounts of his athletic feats, some from his blog but many from other websites that are part of the world of ultrarunning. The standard distance is 50 kilometers, or 31 miles, though many races are much longer.

Over the years Nephew, 38, has made an art form out of surviving these grueling races: he runs about 10 miles a day and up to 25 miles on Saturdays or Sundays. He eats heartily the day before a race, consuming as much as 3,000 calories with plenty of pasta, bread and a big dessert. On the day of a race he eats another big meal, making sure to allow three hours between eating and running. During a race, he can burn more than 1,400 calories, so he sips flat cola, a drink ultrarunners favor because of the easily digestible simple sugars—and the caffeine boost. He prefers fluids to solid food while running.

Nephew ran high school track and cross country in Plattsburgh, N.Y., and cross country at Hobart College. But it wasn’t until he began his graduate studies at Tufts that he tried longer distances. He discovered that the longer the race, the better he did. “I don’t have a lot of natural speed,” he says, “but I do have a lot of endurance.”

His longest run was 90 miles, from the border of Massachusetts and Rhode Island to Blue Shutters Beach in Charlestown, R.I., a feat that took 12 hours. The run was not a traditional race but part of a subset of ultrarunning called Fastest Known Times, or FKT. In these events, a runner is on his own, keeping close track of what he or she knows is the fastest time for a distance. Currently Nephew has the FKT for the Rhode Island run and for the Presidential Traverse, a grueling 20-mile trek through the White Mountains, including Mt. Washington, which is 6,288 feet high. Experienced hikers often take several days to go that distance.

Watch Ben Nephew take on Blackhead Mountain in the Catskills during the 2013 Escarpment Run.

He enjoys the FKTs in part because he can run when he chooses, rather than having to show up for a race at a particular time; it makes it a little easier to balance running with family and work. He lives in Mansfield, Mass., with his wife, Stephanie, and their two sons, Gavin, 6, and Aiden, 18 months. He blends family life and training by hiking, often to New Hampshire or more likely to the Blue Hills or Mt. Wachusett. Until about a year ago, he carried Gavin in a hiking backpack, but now the youngster is able to go a good six or seven miles on his own, so Dad carries Aidan.

He’s a two-time member of the U.S. team for the International Association of Ultrarunners (IAU) Road 50K Championship, and was named three times to the IAU Trail World Championship team, finishing sixth out of 200 runners in 2011. That, Nephew says, was a really good race. He completed the 50-mile course in Connemara, on Ireland’s west coast, in 6:56. “It was one of those days where I had trained well and felt great on race day and performed up to my potential,” he says.

Like many ultrarunners, Nephew analyzes his races on his own blog or his team’s blog or in submissions to online magazines, where racers offer descriptions of terrain, supplies and weather conditions, complete with graphs, charts, photographs and sometimes videos. Runners frequently comment on each other’s races and discuss how they trained.

At 5 feet, 5 inches and 130 pounds, Nephew is on the small side. In ultrarunning, he notes, size doesn’t matter. “People at events I do—some are a foot taller than I am and some are my size; it’s not a crucial factor. The focus is on training rather than body weight as an indicator of fitness.”

While Nephew gets a lot of satisfaction from running long distances, he has no interest in running the increasingly popular 100-mile races or the 24-hour races, in which competitors don’t sleep. “The challenge is enjoyable, but if you get into the realm of suffering, it’s too much,” he says. “I don’t do it in pursuit of suffering.”

Still, after the 90-mile Rhode Island run, he began thinking of running from Ashburnham, Mass., at the New Hampshire border, to Douglas State Forest in Rhode Island, a distance of 117 miles. The challenge beckons. “That’s how this happens,” he says. “You do one, and the next one isn’t all that much more.”