A Life of Healing

As Danielle Currier learned in her volunteer work as a dental student, serving others is its own reward 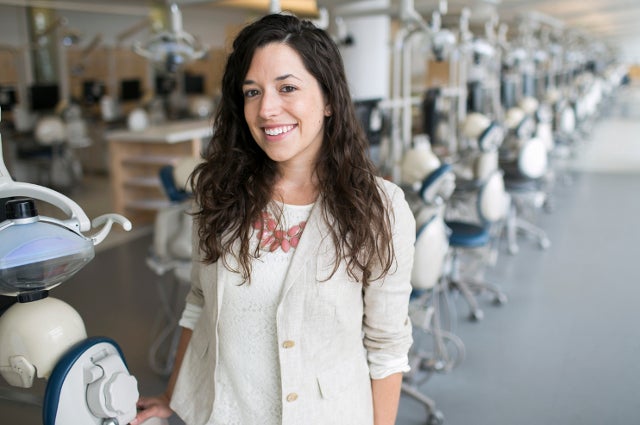 A patient who was terrified of the dentist made Danielle Currier want to become one.

During her undergraduate years at Boston College, Currier, D13, worked the front desk at a family dental practice in Marlborough, Mass., during the summer. One day, the periodontist came over to ask for help because her assistant had hurt her back. Currier volunteered and found herself facing an extremely anxious patient in the chair. While the periodontist prepped, “I talked with the patient and was able to reassure her,” Currier recalls. “She got through the procedure just fine.”

That experience “changed my idea of what dentistry was,” says Currier, who had planned on becoming a physician. “I saw the challenge and the transformation.” At the practice, “I saw families who had been going there for years. The general dentist knew them; he knew their kids and all about their health. It was such a personal thing to treat these people. It got me thinking, ‘This is similar to what drew me to medicine in the first place.’ ”

When Currier returned to BC that fall, she switched her major from pre-med to pre-dental.

At Tufts, Currier threw herself into the experience—so much so that she was recognized by both Tufts President Anthony P. Monaco and a national dental organization for her contributions to the community and the profession.

She was a member of the dental team at the Sharewood Project, a free health clinic run by Tufts medical students and physicians that is supported by the Tisch College Civic Engagement Fund. There, Currier and classmate Vincent Trinidad, D13, added case management to their health-care repertoire.

“We realized we had no way of determining whether our services were effective if we were just referring patients,” says Currier. “So we started following up to see if patients actually went where we referred them, and if they were able to receive dental care.” Currier became an advocate for her patients, many of whom were unemployed, uninsured or recent immigrants. “If someone couldn’t get into a particular clinic, we would try to find out why to better understand the challenges and roadblocks our patients were facing. And we would then present this to our classmates, faculty and colleagues in the health-care field to find ways to improve these situations while acting as a voice for these individuals in facing their difficulties.”

She expanded that advocacy work to the public policy arena, lobbying alongside Tufts faculty and classmates at the Massachusetts State House for the student chapter of the American Association of Public Health Dentistry. “I went to talk with state senators, explaining what I had seen at Sharewood and why oral health is so important,” she says.

Currier and Trinidad also established a dental advisory board at Sharewood, a forum for dental students to huddle with Tufts medical students to talk about conditions that involve patients’ oral health. “It was a nice, collaborative approach,” she says.

In addition to her work at Sharewood, Currier was a community outreach co-coordinator for her class, with Sarah Greenlaw and Rachel Misuraca, both D13, helping organize such service projects as a City Year neighborhood cleanup, a Red Cross blood drive and a Habitat for Humanity build.

Currier took her service work abroad in summer 2012, traveling to Zambia to volunteer with the nonprofit Options for Children. She worked with a team that conducted more than 700 screenings, provided advanced care to more than 140 patients and administered fluoride treatments and restorative care to children in an orphanage in the Zambian capital, Lusaka. Her overseas work was partially funded with a grant from the Tisch Active Citizenship Summer International Program.

Just before she graduated in May, Currier received the Tufts Presidential Award for Citizenship and Public Service, which recognizes outstanding civic achievement; she was the sole recipient from the School of Dental Medicine. Then, the American Association of Public Health Dentistry honored her for outstanding achievement in community dentistry.

Currier has begun the next phase of her training—a year-long general practice residency at Weill Cornell Medical School at Presbyterian Hospital in New York City. Her rotations include pediatrics and oral and maxillofacial surgery, where she’s assisting in the operating room and the emergency room. She also spent time training at Memorial Sloan Kettering Cancer Center. Her future plans remain fluid.

“I’ll probably try working as an associate in a private practice and at a public health clinic,” she says. “Eventually, I’d love to end up in academia, maybe someday with a faculty position at a dental school. I really enjoy that type of environment; it’s the hub of where everything is happening.”

Currier says she is thrilled to be living her childhood dream of becoming a doctor, even though she never expected to be a doctor of dental medicine. “From the time I was little, the idea of healing people fascinated me,” she says. “Back then I wanted to save the world. Today, I still feel like I can have an impact through oral health.”

This article first appeared in the Fall 2013 issue of Tufts Dental Medicine magazine.

Maura King Scully is a freelance writer in Walpole, Mass.