For stroke, pre-diabetes and coronary heart disease, physical activity seems to be as good as popping a pill

Doctors should consider prescribing exercise as well as medication for some common conditions, a new study suggests. It found that exercise affects outcomes about equally as well as prescription drugs for coronary heart disease, pre-diabetes and stroke. The research did not specify which types of exercise work best for the different conditions.

The study was what is called a network meta-analysis, which allows researchers to compare evidence from many existing studies on different types of treatments for the same disease. The review examined 305 randomized controlled trials with 339,274 participants. 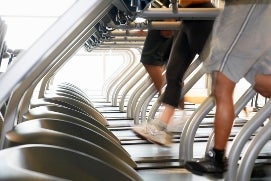 “I think we need more studies, in particular far more evidence on exercise,” John Ioannidis says. Photo: Ingimage
“We wanted to see how much evidence there is, with rigorously designed studies, on exercise versus the most commonly used type of intervention in medicine—medication,” says study co-author John Ioannidis, an adjunct professor at Tufts School of Medicine and director of the Stanford Prevention Research Center.

The evidence “suggests that exercise and many drug interventions are often potentially similar” in terms of reducing mortality during rehabilitation after stroke, prevention of diabetes and secondary prevention of coronary heart disease, according to the study, published in October in the British journal BMJ. (Secondary prevention refers to early detection of a disease and treatments that prevent it from getting worse.)

Only in one specific instance—heart failure—was one type of prescription drugs clearly more beneficial than exercise, the study found. Fewer deaths occurred in patients who took diuretics rather than exercising or taking other medications.

Exercise, not pharmaceuticals, provided better outcomes in patients rehabilitating after a stroke. In the cases of coronary heart disease and pre-diabetes, exercise and drugs had about equal outcomes.

The results, Ioannidis says, suggest that exercise is underused by physicians for patients with these conditions.

Ioannidis cautions that the study should not be taken as a recommendation to replace prescription drugs with exercise. “I’m not saying that people who are taking drugs for these conditions should stop taking them—that would be a gross misinterpretation of the findings,” he says. “But it seems that exercise is underutilized.”

He also says the meta-analysis uncovered far fewer studies on the benefits of exercise for patients with these conditions, compared to those on the benefits of drugs. He conducted the study with Huseyin Naci, a researcher at LSE Health and Social Care, a research center at the London School of Economics and Political Science.

“I think we need more studies, in particular far more evidence on exercise,” Ioannidis says. He adds that there should be more studies of drugs, too, noting that many medications used by tens of millions of people have only undergone clinical trials with 500 or 600 people.

Exercise as medicine has challenges that need to be better studied, Ioannidis notes. It’s not clear how easy it is to adopt it as a long-term practice. “How do we get people to exercise not just for a few days,” he says, “but for the long term?”