Why we must curb illegal wildlife trafficking 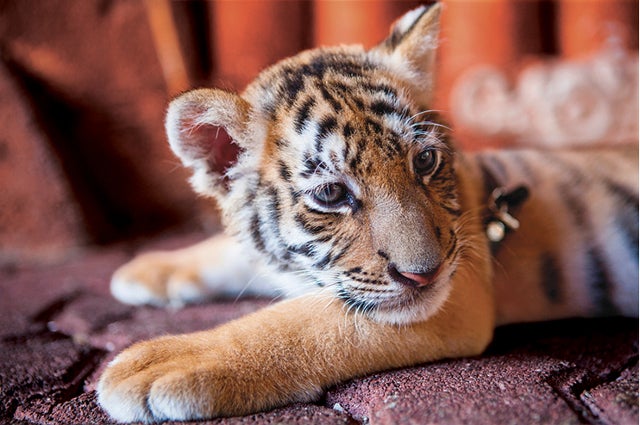 Significantly more tigers are in U.S captivity than are left in the wild. In fact, as many as 10,000 tigers, lions and other endangered big cats are privately owned in the United States, according to the International Fund for Animal Welfare (IFAW).

“People from countries where these cats live in the wild think Americans are pretty crazy,” says Kelly Donithan, the wildlife rescue program officer at IFAW. But in this country, “most people feel it’s their right to own whatever kind of animal they want, regardless of what it means for the animal.”

An orange tiger cub can be had for as little as $300, far less than the cost of many purebred puppies. “They’re really cute, so it seems like a good idea right then,” says Donithan, who earned a master’s degree in conservation medicine from the Cummings School last spring. “But within a year, you have a really dangerous, full-grown tiger” that is 300 to 500 pounds and costs $5,000 to $6,000 a year to feed, she says. “That’s when many people realize they don’t actually want a tiger.”

Through IFAW, Donithan partners with law enforcement and accredited sanctuaries to find these big cats new homes. “We get them into a better situation, one where they’ll receive the best care possible for the rest of their lives,” she says.

Private ownership of big cats made national headlines in October 2011, when the owner of a then-legal backyard menagerie in Zanesville, Ohio, opened the cages housing his tigers, leopards, lions, wolves, bears and monkeys before committing suicide. Local police were forced to shoot and kill nearly 50 animals—18 of them Bengal tigers, a species on the edge of extinction—before they could threaten public safety.

Along with other animal welfare and conservation organizations, IFAW has drafted a federal bill, the Big Cats and Public Safety Protection Act, which would ban private ownership and breeding of big cats. The legislation was introduced in the House last May and in the Senate in July. It “is a common-sense solution to a situation that has spiraled out of control,” U.S. Sen. Richard Blumenthal, D-Conn., said in introducing the Senate bill. “Thousands of dangerous big cats are kept in deplorable conditions as backyard pets and in roadside zoos across the nation. This bill would alleviate the threat these animals pose to the general public.”

Donithan’s previous work with big cats and other endangered animals at the White Oak Conservation Center in Florida inspired her to apply to the M.S. program at Tufts. Many of the species she worked with are still the target of poaching or capture in the wild, she says, “and that’s what led me into conservation medicine.”

As an intern at IFAW during Tufts’ yearlong master’s program, Donithan participated in a federal undercover operation targeting illegal wildlife sellers who conduct business online. A member of the Operation Wild Web team, she trolled the Internet in search of suspicious advertisements. When she found ones that appeared to be selling endangered or dangerous animals or poached goods, she forwarded them to the U.S. Fish and Wildlife Service to investigate. Conducted over two weeks in August 2012, the sting resulted in 154 “buy/busts”—30 involving federal wildlife crimes and 124 for violations of state wildlife laws.

A new IFAW report found that the illegal wildlife trade internationally generates an estimated $19 billion per year and is organized crime’s fourth most lucrative global activity, behind narcotics, counterfeiting and human trafficking.

“We are now at a pivotal point in combating illegal wildlife trade, as national governments, including our own, are beginning to recognize that this trade seriously threatens national security, global health and species survival,” says Donithan. IFAW is working with governments and other international nonprofits to find sustainable solutions to curtail such activities.

As for helping privately owned big cats in the United States, IFAW has already rescued and assisted in finding suitable placements for more than 150 animals kept in deplorable conditions. There’s much more work to be done, Donithan notes. “We have barely hit the tip of the iceberg.”