Civilian service, such as the new Tufts 1+4 program, will lead to a better country and world, says retired Gen. Stanley McChrystal 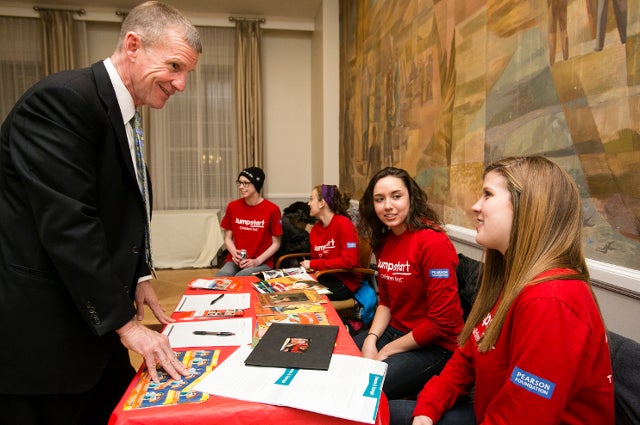 What it means to be a good citizen in America has been narrowed, and that’s not a good thing, retired Gen. Stanley McChrystal told a Tufts audience during a Symposium on Service and Leadership on Feb. 19.

“Some people say, ‘I have rights, and I pay taxes. And if it’s convenient, I will vote.’ Citizenship is wider than that,” he said at the symposium, which officially launched the university’s new bridge-year program, Tufts 1+4. Based at the Tisch College of Citizenship and Public Service, the program will offer undergraduates a structured year of full-time national or international service before they begin their four years of study here. The program will begin in the fall of 2015.

McChrystal said Tufts 1+4 exemplifies the qualities he believes are needed for a voluntary national service program. He chairs the leadership council of the Aspen Institute’s Franklin Project, which calls for making military or civilian national service a voluntary rite of passage for all young Americans and for creating one million full-time national service positions as part of a renewed commitment to engaged citizenship.

The United States is struggling with economic and political problems that call for active citizenship, McChrystal said. “Some 25 percent of our high school students don’t graduate. We have a level of political gridlock bemoaned by everyone, but fixed by none,” he said. “We have voting rates that are far lower than a tremendous number of other countries.” 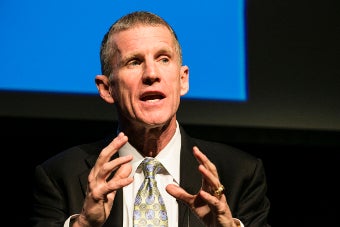 “We have to change our culture so that civilian service is expected of everyone,” said Stanley McChrystal. Photo: Alonso Nichols
During World War II, he noted, not only were 16 million Americans serving in the armed forces, but they were joined by similar numbers of citizens who worked in factories, grew gardens and supported the war effort in other ways.

Two undergraduates in the School of Arts and Sciences who participated in bridge-year programs before arriving at Tufts also spoke at the symposium. Lydia Collins, A17, lived and worked in Ecuador as a volunteer for Global Citizen Year, and Phillip Ellison, A16, worked with youth in the South Bronx through the City Year program.

Collins said her experience gave her a huge appreciation for her college education and a realistic world view. “Outside a textbook, it showed me that social justice takes effort, grit and resilience.”

Ellison said a year of service allows a student to understand the world in ways that don’t occur in a classroom. “You will be challenged in ways you never thought of before, and you will both fail and succeed, and those lessons of failure will be the most critical.”

Watch a video of the Service and Leadership Symposium.

Alan Solomont, A70, the Pierre and Pamela Omidyar Dean of the Tisch College—the nation’s only university-wide civic engagement college—told the symposium audience that his own commitment to active citizenship was launched and nurtured at Tufts. He worked as a community organizer in Lowell, Mass., after graduation and later chaired the board of directors of the Corporation for National and Community Service and served as U.S. ambassador to Spain and Andorra.

“The notion that we all have responsibilities beyond ourselves speaks to the essence of Tisch College’s vision,” Solomont said. “Throughout our lives, each of us should ask, ‘How should I use my ability to better the lives of others?’ Tufts University and Tisch College encourage students to ask these questions, and support them as they seek the answers.”

Provost David R. Harris told the symposium that Tufts 1+4 removes some of the challenges associated with traditional gap-year efforts, namely helping interested students find meaningful experiences through pre-vetted programs and removing any stigma attached to not going to college right after high school.

“Students can say I came to Tufts, and I chose to be part of a select program at Tufts, and as part of that program I was involved in service,” he said.

Tufts 1+4 also will democratize the bridge-year experience. “We are saying that if you have demonstrated financial need, we will make sure finances are not an impediment to your participation,” Harris said. Five alumni and the parents of an undergraduate already have made commitments to support the program.

Other distinctive elements of Tufts 1+4 are the opportunities for both national and international service (many traditional gap-year programs offer only overseas work) and the inclusion of academic subject matter, such as instruction in civic and leadership skills. Other gap-year experiences often are divorced from the college curriculum.

Tufts 1+4 reinforces a major plank in the T10 Strategic Plan—to provide all students with life- and perspective-changing experiences.

The university will seek proposals from potential service site organizations this spring. While the program is expected to ramp up over time, the target is to have 50 students participate in the first year.