Tisch College dean lauded for work while serving as U.S. ambassador to Spain and Andorra 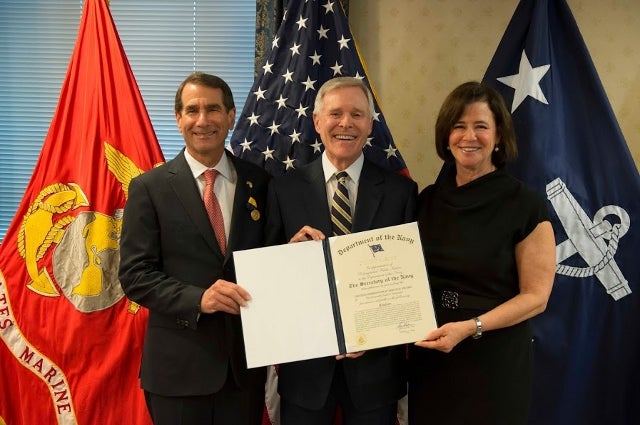 Alan D. Solomont, the dean of the Tisch College of Citizenship and Public Service and former U.S. ambassador to Spain and Andorra, has received the U.S. Navy’s highest civilian honor, the Distinguished Public Service Award.

The award was presented on Feb. 21 at a Pentagon ceremony presided over by Secretary of the Navy Ray Mabus. Also present was James G. Stavridis, dean of Tufts’ Fletcher School of Law and Diplomacy and NATO Supreme Allied Commander Europe during Solomont’s tour in Spain.

Solomont, A70, was recognized by Mabus for his longstanding support of the Navy and Marine Corps and his dedication to ensuring the nation’s sailors and marines had the resources necessary to protect U.S. interests around the globe. Mabus also lauded Solomont for his partnership-building efforts in Spain and, in particular, for an agreement with the Spanish government to locate four U.S. destroyers at Naval Station Rota as part of NATO’s missile defense program.

“I’m deeply honored to receive this award, and I accept it with great humility,” said Solomont. “We had a willing partner in the government of Spain, which recognizes the importance of being a strong and reliable ally to the U.S. and of fulfilling its responsibilities as a member of NATO.”

Solomont served as U.S. ambassador to Spain and Andorra from 2009 until 2013. On Jan. 1, he became the Pierre and Pamela Omidyar Dean of Tisch College, the nation’s only university-wide civic engagement college. Solomont was joined at the ceremony by one of his Tisch colleagues, Peter Levine, who directs the Center for Information and Research on Civic Learning and Engagement.

Solomont also credited another partner, his wife, Susan Lewis Solomont, G81, “who was instrumental to everything I did leading the diplomatic mission in Spain,” he said.

“One of the lessons Susan and I learned during our tour was how much the American people depend, for their security and prosperity, on our men and women in uniform, on our foreign service officers and on the families of those who serve,” said Solomont.