A cup of tea and a cookie for an afternoon snack, while a pleasant routine, may not be supplying adequate nutrition for many baby boomers, a recent Tufts study suggests. Substituting a glass of milk or a hard-boiled egg would better fuel the person who has reached that time in life—that is to say, anyone older than 50—when muscle mass declines at a rate of 1 to 2 percent annually.

“It’s estimated that 20 percent of people between the age of 51 and 70 have an inadequate protein intake,” Paul Jacques, director of the Nutritional Epidemiology Program at the Jean Mayer USDA Human Nutrition Research Center on Aging at Tufts, told the Atlanta Journal-Constitution. 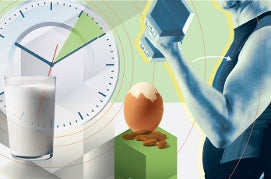 Illustration: Betsy Hayes
Jacques and his colleagues reported in the British Journal of Nutrition that physical activity (working with weights or aerobic exercise, such as swimming or cycling) plus sufficient protein intake can halt and even reverse the normal muscle loss associated with aging.

Research done by the U.S. Department of Agriculture shows that consuming 90 grams of high-quality protein a day helps strengthen muscles. For reference, there are seven grams of protein in an ounce of cooked meat, eight grams in a cup of milk and six grams in an egg. Experts say it’s best to pace your protein consumption throughout the day, so muscles have a steady supply of amino acids to draw upon.

This article first appeared in the Winter 2014 issue of Tufts Nutrition magazine.