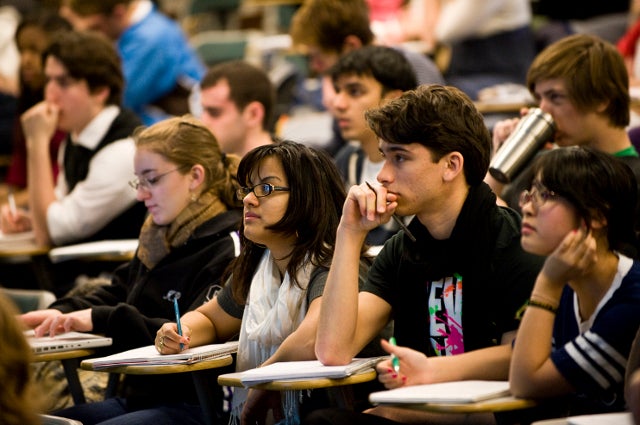 Tufts University’s inaugural Bridge Professorships will advance teaching and scholarship in two fields that hold considerable promise for interdisciplinary discovery: the role of water in international security and the science that underpins how our brains understand and respond to the world.

The Bridge Professorships are a major initiative in the university strategic plan, Tufts: The Next 10 Years (T10), which seeks to develop innovative approaches to address local and global challenges, among other objectives. The long-term goal is to create up to 10 Bridge Professorships that span disciplines, departments and schools. The provost’s office is seeking proposals for the next round of bridge faculty positions; the deadline for submissions is May 31.

The first two professorships were selected from eight proposals submitted in December and involve partnerships among the School of Arts and Sciences, the School of Engineering and the Fletcher School.

“The proposals were selected by members of the provost’s office in conjunction with the deans of the schools involved,” says Kevin Dunn, associate provost. “The hiring search for the new professors will be a collaborative effort involving the provost, deans and faculty from the schools.” The new faculty members, he says, could be on board as early as the fall 2014 or spring 2015 semester.

“We are looking at worldwide water scarcity, with big projected declines in the availability of fresh water in just decades,” says Kelly Sims Gallagher, an associate professor of energy and environmental policy at the Fletcher School, who co-authored the proposal. “Improving water security is going to be a major preoccupation of many governments around the world.”

The goal of the faculty search, she says, is to find an entrepreneurial social scientist who is deeply involved in scholarship, but also eager to take that scholarship into the field and be a problem solver.

The new faculty position will add much-needed social science strength to the School of Engineering’s expertise in the science of water, says Kent Portney, a professor of political science in the School of Arts and Sciences, who co-authored the proposal with Gallagher.

“This professor will work in international environmental security, including questions of human rights, regional security and sustainable development,” says Portney. That kind of range will support Tufts’ long-standing strength in addressing water issues through the interdisciplinary graduate program Water: Systems, Science and Society, he says.

Life of the Mind

Consider, for example, the fields of computer modeling and simulation, which draw from philosophy and computer science, and an emerging area known as computational pragmatics, the study of how contextual information can provide clues about how language is generated and understood. These fields are multidimensional, drawing on philosophy, psychology, linguistics and computer science to advance our understanding of what makes our brains tick.

“Answering deep questions about the human mind requires a multidisciplinary approach,” says Matthias Scheutz, a professor of computer science who co-authored the cognitive science proposal with Erin Kelly, associate professor and chair of philosophy, and Ray Jackendoff, the Seth Merrin Professor of Philosophy and co-director of the Center for Cognitive Studies.

“We need to formulate the right kinds of questions (philosophy) to guide the overall research direction investigating the empirical phenomena (psychology) to produce data for building the right kinds of computational models (computer science), which can elucidate the mental processes we are trying to understand,” says Scheutz. The bridge professorship in cognitive science will be the hub that links these inquiries.

The T10 strategic plan envisions that the Bridge Professorships will seed a culture of change across the humanities, the social sciences and the sciences and complement the typical critical hiring that already occurs within departments and schools.

Faculty interested in submitting proposals for the next round of bridge professorships can visit http://strategicplan.tufts.edu/bridge-professorships for additional information and submission forms.