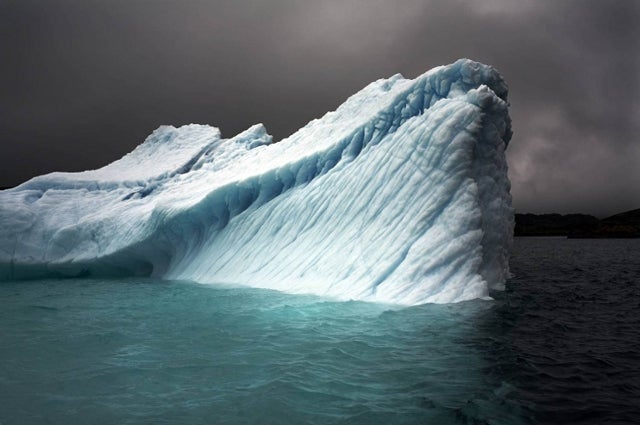 On a summer day, Camille Seaman’s Native American grandfather would have her and her siblings sit in a warm field. They would start to sweat, and he would ask if they noticed the moisture on their arms, hands and heads. Then he would point to wisps of clouds in the sky and tell them, “That’s part of you up there, the same water as your sweat.”

Seaman connected the dots, she told a radio interviewer last fall. “The clouds become the rain, become the snow,” she said. “So when I look at an iceberg, I really do have the sense that this could be part of my ancestors. This is really part of us.”

Seaman does more than look at icebergs. Since 2003 she has photographed them from the decks of icebreakers across the North and South pole regions. Her works, along with those of seven other artists featured in the exhibition Seeing Glacial Time: Climate Change in the Arctic at the Tufts University Art Gallery through May 18, are poignant interpretations of how global warming is threatening our world.

“The exhibition introduces Boston-area audiences to artists whose paintings, photographs and video installations have not been seen here before and to new work created for the occasion,” says Amy Ingrid Schlegel, director of galleries and collections at Tufts, who curated the exhibition. 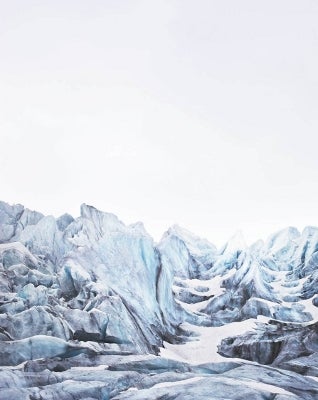 Caleb Cain Marcus, Nigardsbreen, Plate I, Norway, 2011; pigment fiber print. Photo: Courtesy of Caleb Cain Marcus
“The premise [for the exhibition] is that data, facts, diagrams and scientific visualizations are somehow not really translating the reality and tragedy of global warming into the public consciousness,” Schlegel says. “I wanted to uncover artists who were not working in an overtly activist, didactic way, but producing compelling work that was interpretive and a different narrative from the science. These works are open to interpretation.”

Seaman’s photographs speak to the tone of the exhibition. “I approach the images of icebergs as portraits of individuals, much like family photos of my ancestors. I seek a moment in their life in which they convey their unique personality, some connection to our own experience and a glimpse of their soul, which endures,” Seaman has said.

Some of the exhibition’s works evoke the American Hudson River School, with its paintings of majestic mountains, rivers and valleys that idealized and romanticized nature. But, Schlegel says, “the Arctic is turning this tradition on its head a bit. In these artists’ work there is a kind of melancholy in representing receding glaciers, melting icebergs, isolated people and animals. There is beauty, but also a sense of loss—that we are witnessing an extinction of a geological epoch.”

This is clear in the paintings of exhibitor Resa Blatman, who says her work has shifted. “Lush representations of nature were the central focus of my paintings for some time,” Blatman says. “Now, my interest lies in current environmental issues, their effect on our landscape and natural resources and how we perceive the changes in the environment.”

A glacier exists in time, but when you look at one, Schlegel asks, what do you see? It is here and now, but also contains ancient history. “So these works raise the conundrum of being in the present, yet being in the presence of the past, which makes us ask ourselves how we notice change, like the effects of global warming,” she says.

This is evident in Caleb Cain Marcus’s Portraits of Ice series. His long-exposure, low-horizon photographs of glacial landscapes with expansive skies situate a viewer simultaneously on top of the glacier and at the bottom of the composition in the position of the photographer.

By looking at the Arctic region, Schlegel was able to give range and depth to the exhibition of nearly 50 pieces of art. Unlike the Antarctic, the Arctic is inhabited by people and a wealth of wildlife.

For example, photographer Gilles Mingasson documents the inhabitants of a western Alaskan Arctic town who have been told by scientists that their peninsular village will be submerged in four years because of global warming. Subhankar Banerjee focuses on how climate change has affected indigenous Arctic communities and migratory wildlife. Changes in the Icelandic landscape are recorded in the photographic diptychs by the German artist Olaf Otto Becker, and come to life in the video installation by Joan Perlman.

The impact of the exhibition is perhaps best expressed by the photographer Marcus in the preface to his 2012 book, A Portrait of Ice:

“It hopes to become a part of the collective memory and to shift our perception through the kind of knowledge that exists within a photograph, one that is transmitted not only by sight but also by vibration. Living in the city it is easy to forget about the land; to forget that our history is held within the ice; that our history is melting. The Inuit elders say the melting of the ice is the land crying out in pain. Now we must listen.”

For more information about Seeing Glacial Time: Climate Change in the Arctic and gallery hours, visit the Art Gallery website.