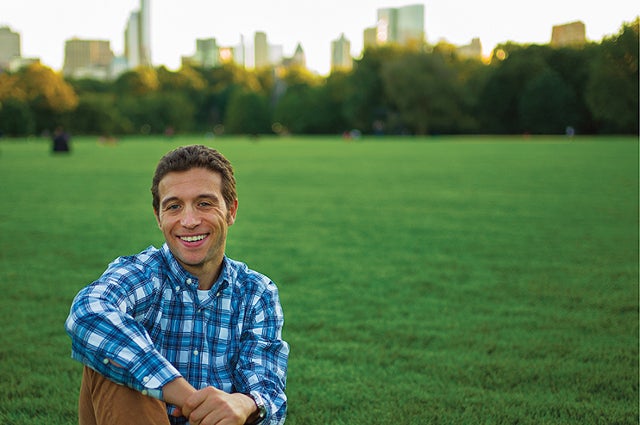 Things aren’t looking good, biomedical researcher Raimon Duran-Struuck thought as he knelt beside a miniature pig. The animal had become sick a few days earlier with a rash and abdominal swelling. The week before, the pig had been infused with another mini-pig’s blood stem cells—precursors of white and red blood cells—as part of a study of a novel treatment for leukemia and other blood diseases.

These hematopoietic cell transplants, or HCTs, amplify a recipient’s immune system by adding white blood cells from a donor to destroy blood-borne cancer cells. HCTs often go awry, though, which has limited their use in animal and human medicine thus far. Duran-Struuck, A98, V02, and a research team at Massachusetts General Hospital were trying to develop a safer, more effective HCT protocol in mini-pigs as a prelude to human trials.

One of biggest risks with HCTs is that transplanted immune cells attack the recipient’s skin, intestinal and other tissues, resulting in the potentially fatal graft-versus-host disease. The pig’s rash suggested this complication, but the animal’s pattern of skin lesions did not.

Duran-Struuck and his colleagues figured the pig was having a reaction to HCT-related medicines, which included a potent immune-suppressing drug. During HCTs, the recipient’s immune system is damped down to stop it from destroying the transplanted cells.

But when he examined the pig that evening a few years ago, Duran-Struuck noticed an unusual swelling of both eyelids and conjunctiva. Poring over a textbook about swine diseases, he found his answer: The swollen eyelids and other symptoms pointed to edema disease, a disorder caused by rogue intestinal bacteria. Post-transplant immune suppression substantially raises the risk of such infections. He immediately started the pig on an intravenous antibiotic. “I didn’t wait a second” to begin treatment, he recalls. “I felt it was my pig, my patient, my research subject.”

Finding a way to reduce the side effects of HCT to enable the treatment’s great promise in both human and animal medicine has intrigued Duran-Struuck since he graduated from the Cummings School of Veterinary Medicine in 2002. HCT was first used in cancer patients a half-century ago to replenish blood-cell-making bone marrow wiped out by heavy doses of radiation and chemotherapy. Later, researchers discovered that the transplanted cells could also help kill cancer cells. That led to less risky HCT-based therapies, which capitalized on the cancer-attacking effect, along with more moderate doses of chemo and radiation.

But hematopoietic cell transplantation is still very much a work in progress. For one thing, donors and recipients must carry similar immune cell components, known as human leukocyte antigen (HLA) molecules. The matching works like blood-type matching, but the fact that there are many thousands of HLA types means that suitable donors often can’t be found. (For the most important HLA variants, it’s estimated that the chance of finding an exact match in a randomly picked, unrelated donor is only about one in 100,000.) Additionally, the need to suppress HCT recipients’ immune systems, coupled with the risk of graft-versus-host disease, rule it out for all but a limited number of desperately ill patients.

In recent years, though, a possible solution to these complications has come to the fore: fine-tuning HCT so that transplanted immune cells are permanently integrated into a recipient’s immune system.

The effect of this mingling resembles that of intermarriage among Europe’s royal families in past centuries to promote their realms’ peaceful coexistence—it induces a state called tolerance, in which a recipient’s immune cells are prevented from killing off transplanted stem cells (a failed graft) and from being attacked by the transplanted cells (graft-versus-host disease). Achieving such tolerance means HCT patients can dispense with daily doses of risky, immune-suppressing drugs.

Even more enticing, this comingled immune state can produce generalized immune tolerance to a donor’s tissues. That means kidneys and other organs can be transplanted from donor to HCT recipient without the need for a lifelong regimen of immunosuppressant drugs.

Dispensing with this immune suppression would be profoundly life changing for transplant patients—no more worrying that a turn in the garden might bring on a dangerous infection if a patient is exposed to soil fungi and bacteria, that danger lurks every time someone sneezes nearby or that adopting a new pet might be too risky because of the new germs it would bring into the home.

Engendering long-term tolerance has long been a grail in medicine, and Duran-Struuck’s groundbreaking animal studies have seemingly have put it within reach.

A Career in Focus

Duran-Struuck’s interest in animal research dates from his high school years in his native Barcelona, Spain. His father, a virologist, worked for a company that did infectious disease research using goats and sheep, and Duran-Struuck spent much of his spare time as a helper at the firm’s farm. His family moved to the United States, and he earned his undergraduate degree in biochemistry at Tufts. But his career path came into view when he volunteered one summer at Boston’s Franklin Park Zoo.

“They put me on the hooves-and-horns crew” cleaning cages, he recalls. “I loved working with the animals”—despite the run-in with a stork that tried to peck his eyes out and another episode in which a friendly camel’s face licks brought on a severe rash. It was while volunteering at the zoo hospital that Duran-Struuck got hooked on animal medicine. “From there it was a straight shot to vet school,” he says.

While doing postdoctoral research at the University of Michigan, he became fascinated by the idea of tweaking HCT to maximize its cancer-fighting power while avoiding graft-versus-host disease. Scientists earlier had developed HCT regimens in mice that led to the sustained immune-cell mixing that induces tolerance. The next step was to develop similar methods that would work in large animals and humans. After his Michigan stint, Duran-Struuck did a second postdoc at a world leader in HCT research, Massachusetts General Hospital in Boston.

The mini-pig is the large animal of choice for MGH scientists. A third the size of a regular pig, the animals’ physiology is strikingly similar to that of humans. In the 1970s, MGH immunologist David H. Sachs and colleagues adapted the animals for transplantation research by inbreeding two different strains to produce the swine equivalent of HLA-matched individuals. A herd of the special pigs is maintained at the Cummings School, where Duran-Struuck is an adjunct instructor. The expertise of Tufts veterinarians is crucial to the research.

At MGH, Duran-Struuck worked under Sachs and Christene Huang, another immunologist, to investigate an HCT method involving a combination of immune-suppressing treatments to induce tolerance in a recipient animal. Remarkably, the technique has allowed the transplantation of kidneys, lungs, certain pancreatic cells and other tissues without immunosuppression, says Duran-Struuck. The method has also enabled booster doses of tolerated donor immune cells to be safely infused to dial up an anti-cancer effect.

In conjunction with the work, Duran-Struuck led a key study in 2009 identifying five cases of leukemia in MGH mini-pigs—a discovery that enabled testing HCT as a treatment for the blood-cell cancer in the animals.

In 2010, one of Duran-Struuck’s MGH mentors, Megan Sykes, was appointed founding director of Columbia University’s Center for Translational Immunology. After completing a Ph.D. in immunology at the Universitat Autònoma de Barcelona in Spain last year, Duran-Struuck followed her to Columbia, where he now heads the preclinical transplantation laboratories.

He’s continuing his HCT research there, working with monkeys. The Columbia team’s experimental HCT method begins with the extraction of a small amount of immune cells, called regulatory T cells, from a transplant recipient’s own blood. These cells, which help limit immune attacks, are then multiplied in the lab and frozen. After an HCT is performed, the preserved, calming T cells are reinfused into the recipient to quell the immune warfare that can prevent the donor’s cells from getting established and inducing tolerance.

“We now have a protocol based on regulatory T cells that induces tolerance,” says Duran-Struuck. “Four months after an HCT, we were able to transplant a kidney [from the HCT donor into the recipient monkey] without any immunosuppressants whatsoever.”

Such advances promise to greatly expand HCT’s application in human medicine. Duran-Struuck is also excited about the implications for veterinary medicine. “If we could stay away from toxic side effects,” he notes, “we should be able to use HCT to cure a lot of cases of lymphoma and leukemia in cats and dogs.”

David Stipp has written about science, medicine, the environment and biotech for the Wall Street Journal, Fortune, Salon, Science and other publications.