With training in veterinary medicine and policy, Emerson Tuttle looks to mitigate the losses caused by foot-and-mouth disease 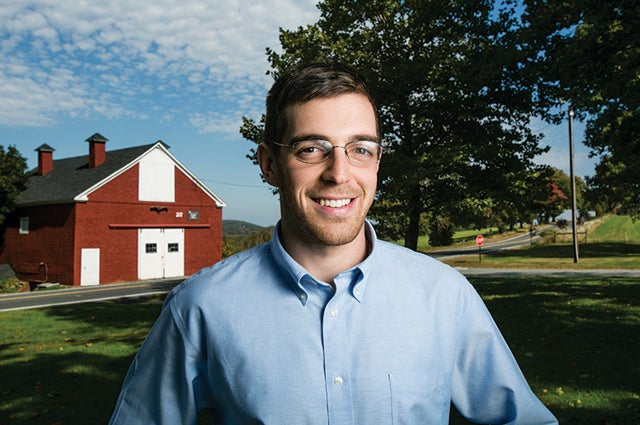 Students gather around picnic tables under giant oaks at the Cummings School on an early fall afternoon. The orderly scene is poles apart from the ever-present traffic jams of Addis Ababa, Ethiopia, says Emerson Tuttle.

He was in the East African capital last year, conducting research on foot-and-mouth disease for his dual degree in veterinary medicine at the Cummings School and international relations at the Fletcher School. Working through Tufts’ Feinstein International Center, Tuttle interviewed 16 African veterinarians about how Ethiopia might better control the disease—and boost the national economy.

Although foot-and-mouth doesn’t infect humans or render meat unsafe to eat, the U.S. Department of Homeland Security has classified the virus as a national security issue because of the significant damage it can inflict quite quickly on a country’s agricultural industry. The rarely fatal but painful disease causes blisters on such cloven-hooved animals as pigs, cows, sheep and goats. Infected animals lose weight and produce less milk, leading to severe declines in food production. The United Nations estimates that foot-and-mouth costs the global economy up to $5 billion annually in production losses.

An extremely contagious virus, foot-and-mouth typically spreads between animals via airborne respiratory droplets. The virus also can be carried in milk, semen and livestock feed contaminated with meat byproducts. It can survive on animal-transport vehicles, in animal holding pens and on footwear, meaning that dairy-tank transport drivers and others can easily spread the disease from farm to farm.

To safeguard local and international trade, many countries that have eradicated foot-and-mouth have a policy of slaughtering infected animals along with those suspected of being exposed to the disease. In 2001, 6.5 million animals in the United Kingdom were euthanized after an eruption of foot-and-mouth—more than 30 years after the last reported outbreak. The crisis cost the U.K. the equivalent of nearly $13 billion, according to that country’s National Audit Office, including $4.5 billion paid to farmers who lost livestock.

While foot-and-mouth has been wiped out in many countries—through vaccination, mandated culling of susceptible animals and bans on the importation of animals and carcasses from countries where the disease still exists—it remains in an estimated 77 percent of the global livestock population. Home to more than 85 million cows, goats and sheep, Ethiopia has the largest livestock population in Africa, according to the U.N. Food and Agriculture Organization (FAO), and a pastoralist economy that is always contending with the economic losses associated with foot-and-mouth.

The High Cost of Disease

The decreased milk production and weight loss in animals with foot-and-mouth particularly affects families who rely on dairy products as a significant source of nutrition, says Tuttle. Thinner animals also sell for less in the marketplace, affecting the livelihoods of small-scale farmers. Until the disease is eradicated, Ethiopia can’t sell its livestock or meat to regions free of foot-and-mouth.

From a Western perspective, says Tuttle, eradication appears to be a reasonable goal. But for a nomadic Ethiopian cattle herder, the methods used to control disease in an American feedlot are not an option. In the United States, every food animal has a health certificate that follows it from birth to death and gets checked each time the animal is sold or crosses state lines.

Ethiopia currently lacks the funding and veterinary infrastructure for such a system, says Tuttle, and “mass vaccination campaigns are ineffective in areas without the means to keep the medicine refrigerated.”

Eradication may be feasible at some point, says Tuttle, but in the short term, Ethiopia could benefit from better management of the disease, with the goal of increasing regional trade.

Foot-and-mouth virus is not carried in muscle tissue, so meat should be a low-risk product if slaughterhouses are held to strict protocols to avoid cross-contamination by bone and lymph nodes, which can carry the virus, he says. If Ethiopia changed its agricultural trade practices to export only appropriately butchered meat—rather than live animals or carcasses—it potentially could develop new trade agreements with other African countries, Tuttle says.

“In Ethiopia, I learned that it’s really crucial to understand the system you are working in and find a solution through that system,” says Tuttle.

As a boy, Tuttle spent countless hours on his grandparents’ dairy farm in southern New Hampshire. But it was wildlife that first got him interested in veterinary medicine, when, as a biology major at Middlebury College, he studied bat ecology in the American Southwest.

After graduation, he worked for the New York City parks and recreation department, teaching students from low-income neighborhoods about the environment. “Seeing the socioeconomic differences that divided New York’s neighborhoods forced me to confront the impacts of economics and politics affecting all realms of life,” he says.

“What he’s doing is groundbreaking,” says Joann Lindenmayer, V85, director of another Cummings School dual-degree program that combines a D.V.M. with a master’s degree in public health.

The dual degree will take five years to complete, but Tuttle decided the extra year was a worthy investment. It paid off in a second international assignment this past summer.

At the FAO headquarters in Rome, he investigated the potential of private industry to help control the spread of foot-and-mouth disease. There are many potential solutions—including a subscription text-messaging service that would provide alerts about disease outbreaks so livestock owners could keep their herds away from high-risk areas. Whether farmers would be willing to pay for such a private service is unclear, Tuttle says, but “you’d be amazed at the penetration of mobile phone technology, even in some of the most remote regions of Ethiopia.”

Increasingly, veterinarians like Tuttle are called on to work at the intersection of animal health and public policy, says Lindenmayer. “Whether local or international, veterinarians need to feel comfortable at the policy table,” she says. “Human health is tied to the health of animals and the environment. We don’t exist in a vacuum.”

This article first appeared in the Winter 2014 issue of the Cummings School’s Tufts Veterinary Medicine magazine.