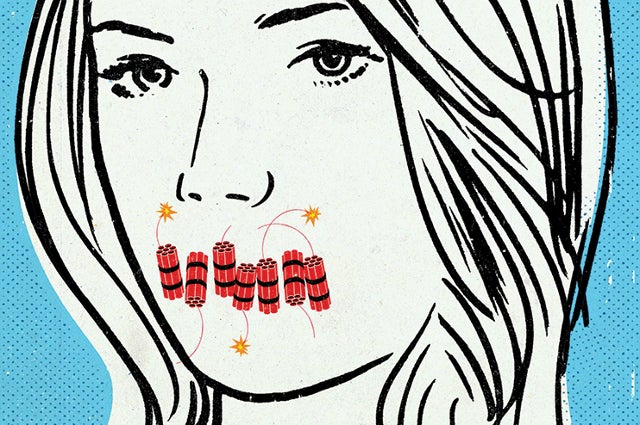 Something was up in Idaho. While visiting a friend in Athol, a small town north of Coeur d’Alene, Jennifer Towers, director of research affairs at the Tufts University School of Dental Medicine, noticed a lot of people in their 20s and 30s with really bad tooth decay, missing teeth and even full dentures.

Curiosity got the better of her, and she asked her friend: Are there not enough dentists in Idaho? Or could people simply not afford dental care?

Meth, short for methamphetamine, is the cheap, powerfully addictive drug that floods the brain with the feel-good neurotransmitter dopamine. Among its many unpleasant and unhealthy side effects, meth is well known to ravage the mouth—and fast. Methamphetamine abuse causes dry mouth and compels users to gnash their teeth, creating tiny fissures in the enamel. The drug also induces sugar cravings, which addicts often sate with soda or sports drinks.

All of this leads to the runaway decay known as “meth mouth.” By the time many meth users quit the drug, pulling the teeth is often the only option. The missing teeth—or, for those who can afford them, dentures—serve as lifelong reminders of their addiction, and not just to the addicts.

“Because meth use is part of the fabric of life up there,” says Towers, “people know that you’ve lost your teeth because of meth.”

She figured that dentists, hygienists and dental assistants could be natural allies with the social service agencies working to curb methamphetamine abuse in northern Idaho. She decided to test that hypothesis for her master’s thesis in health communication at Tufts—she received the degree last May—by developing a meth-prevention campaign.

“The idea that we could use the dental team to talk to teens about drug use, about meth mouth being a reason you don’t want to do drugs—it’s a new concept,” she says.

She began spending about half of her time in Idaho. Twice a month, she flew cross-country to Spokane, Wash., and then drove two hours east to Athol, a 14-hour journey door-to-door.

Towers couldn’t do her research in Boston because meth use isn’t as rampant in the Northeast as it is in Idaho. Meth addiction used to be confined to the Western states, although that’s not the case anymore. But even as the drug creeps eastward, meth seems to have a disproportionate grip on young people in rural areas. A study published in the Journal of Rural Health in 2008 reported that among 12- to 17-year-olds, rural kids use meth at higher rates than their urban counterparts. And “the more rural the area, the higher the use,” the study found.

Part of meth’s grip on rural communities likely stems from the fact that people can make it themselves using such common household items as cold medicine, nail polish remover and drain cleaner, Towers says. “You don’t have to have a connection or a dealer, which you would need to get cocaine or heroin,” she notes. 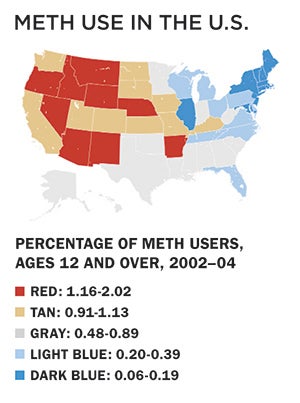 Source: U.S. Department of Health and Human Services
Idaho, one of the most sparsely populated states, is bigger than the six New England states combined, but home to just 1.6 million people. (Massachusetts alone has more than 6 million residents.) The state’s crime statistics describe a community in crisis. In 2006, methamphetamines accounted for close to 30 percent of all drug seizures in Idaho, while cocaine and opiates together accounted for less than 3 percent.

State health officials estimate the drug costs Idaho roughly $300 million a year in law enforcement, health care and other social services. About 80 percent of children in Idaho’s foster-care system are there because of their parents’ meth use. More than half of the inmates in the state’s prison system are there on meth-related charges, and almost 75 percent of women in jail are addicted to the drug.

Towers grew to know and love northern Idaho. Covering all her own expenses, she lived in a camper in her friend’s driveway in Athol, home to about 700 people. What started out as a public health project soon took an anthropological bent. When Towers interviewed five local hygienists to find out how anti-drug education might fit into their job descriptions, she found they generally spend a lot of time with their patients: visits last anywhere from 30 to 85 minutes.

Towers learned that hygienists had already put that time to good use, educating patients about tobacco use, bulimia, HPV and cancer—issues intimately linked to oral health. But the hygienists also told Towers that they don’t talk to every kid about every issue. They said they generally bring a topic up when they notice some telltale signs—smokers’ breath or the acid erosion pattern on the back of the teeth that can signal bulimia or acid reflux disorder.

But because of the stigma attached to drug use, the hygienists said they were hesitant about broaching that subject. In small towns, where everybody knows everyone else, Towers’ survey respondents said they wouldn’t want their patients to feel they were being judged. “I don’t think a lot of dentists feel comfortable talking to people about things that aren’t related specifically to teeth and gums,” says Towers.

That’s why she wanted to develop a campaign that hygienists or dentists could use chairside to educate patients about the risks of trying meth even once. Her next step was to find out what kind of anti-meth messages would have the greatest impact on her target audience—teenagers. She recruited a group of local teens to give her feedback.

Towers thought the kids might respond to zombies, whose images are pervasive in pop culture. “I thought if we showed the degree of degeneration of a person on meth—the way they look before and then being a person fully ensconced in addiction—that’s kind of a zombification,” she says.

“They hated the zombies,” Towers says of her focus group. But her instincts weren’t that far off. The teens, mostly 14- and 15-year-olds, and all girls, thought the zombie idea was cartoonish, maybe suitable for a younger audience. But they were fascinated by the physical degeneration of real meth addicts.

“They showed a lot of concern,” says Towers. “When I showed them a photo and there was complete silence, I knew that something dramatic was going on to get a group of 14- and 15- year-olds to be silent for 15 seconds.”

The girls’ preference for a realistic portrayal of the hazards of meth use jibed with current research on influencing teens’ behavior, Towers says. Together, she and the girls came up with an idea based on the TV show Myth Busters, which uses science and engineering to test conventional wisdom.

Using what she learned from the locals, Towers is designing a campaign that hygienists can easily incorporate into a dental visit—such as a computer screen saver with those shocking before-and-after images—that kids will respond to. She’s also tweaking her campaign to reach several different audiences, including younger kids, parents and dentists.

Her efforts put Tufts in a unique position. Towers says that while many dental school researchers are investigating the physiology of meth mouth, she is one of  the very few coming at the problem from a public health prevention angle.

“If we can engage the dental team in a meaningful way, we could use this as a model for changing other behaviors and educating patients about other diseases,” she says. “The sky’s the limit, really.”

This article first appeared in the Fall 2013 issue of Tufts Dental Medicine magazine.

Dental Emergencies Years in the Making