Paul Kagame, president of Rwanda, spoke at Tufts about his country’s painful past and hopeful future 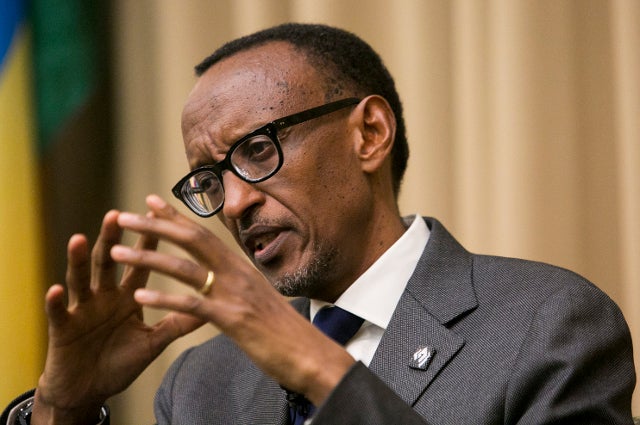 Marking the 20th anniversary of the genocide that killed some 800,000 of his people, Rwandan President Paul Kagame told a Tufts audience that remembrance of the atrocity is a duty owed to the victims.

“But it is not only that—it is the foundation of genocide prevention for future generations of humanity,” he said during the talk April 22 on the Medford/Somerville campus.

“Rwanda is in the midst of the annual remembrance period for the victims of the genocide, which began 20 years ago this month,” Kagame said. “The milestone has helped to focus Rwanda’s and the world’s attention on the causes and consequences of the genocide in Rwanda.”

Kagame, who led the Rwandan Patriotic Army that in mid-1994 defeated the government that led the genocide, has been president since 2000. He also serves as chair of the United Nations Secretary General’s Advisory Group on Millennium Development Goals and as co-chair of the International Telecommunications Union’s Broadband Commission.

The genocide, which was carefully orchestrated by the Hutu-led regime at the time, targeted all Tutsi people in Rwanda. “The genocide against the Tutsi is called so because it was an attempt to eliminate this particular group of people for the sole reason of their belonging to that group,” Kagame said. “It was not random killing. Twenty years later, it is symptomatic of a serious problem that this fact is in dispute and still has to be explained.”

He went on to elaborate about the historical origins of the genocide and detailed what he said was long-term planning for the killings.

“The Rwandan government of 1994 committed the genocide while hiding behind the excuse of a spontaneous outpouring of violent anger,” Kagame said. “To mask their responsibility and make justice impossible, [the government] made millions of Rwandans and civilians complicit in their crimes by inciting them to kill their neighbors and countrymen.”

The perpetrators set up a radio station at the time that “broadcast lists of Tutsi to be killed. The radio instructed people not to spare old people or children,” Kagame said. “It was propaganda of the crudest and most violent kind.”

Even though other countries knew that the radio station was urging horrific violence in Rwanda, they did nothing to stop it by jamming broadcasts, Kagame said. Such inaction was mirrored at the highest levels in the international community, which despite evidence of genocide, stood idly by during the more than three months of intense violence against the Tutsi people, he said.

One of the lessons of that international inaction is clear, he said. “What we learned as Rwandans is that people must ultimately be responsible for their own fate; if you wait for help to come, you will just perish,” Kagame said. “Similarly, if you wait for outsiders to tell you how to rebuild your country, you may find their instinct is to construct the same flawed structure that’s just collapsed, because they have no other blueprint.”

In seeking reconciliation, Kagame said, his government took back some two and a half million Rwandans who had left the country after the Tutsi-led transitional government came to power. “Impossible as it may seem, we made the choice to build a new nation that included all Rwandans, even those who had fled after the genocide,” he said.

It’s vital, he said, that all people in his country first and foremost think of themselves as Rwandans. “If you practice the politics of division—[if] you teach people how different they are and that [becomes] more important to them than how similar they are—then you have a problem.”

Kagame noted that fully half of Rwandans today are under age 20 and so were born after the genocide. “This is a huge opportunity, as well as a challenge,” he said. “If you have 50 percent of the population that is not encumbered by this history I’m talking about, it’s a wonderful thing. They are thinking about their future and how they can benefit each other and not anything that mirrors our past.”

Answering a question from the audience about the prospects for his country, Kagame was cautiously optimistic. “The future we are working toward in Rwanda, and Africa, is one where our country continues to grow stronger and more self reliant,” he said.

In introducing Kagame to the Tufts audience, President Anthony P. Monaco noted that the university is directly involved with Rwanda in a number of ways. The Cummings School of Veterinary Medicine and the Department of Public Health and Community Medicine at the School of Medicine have assisted Rwanda’s veterinary and public health schools with curriculum and faculty development and technology support. The Cummings School has also been engaged in Rwanda through its international veterinary medicine program, supporting the creation of an ambulatory veterinary clinic at the University of Rwanda-Nayagatare, with assistance from Cummings Foundation.

Tufts School of Dental Medicine is helping Rwanda assess its needs for oral health care and education; that project, which is also funded with the support of Cummings Foundation, builds on the dental school’s already significant engagement in Africa.