The United States of Somerville 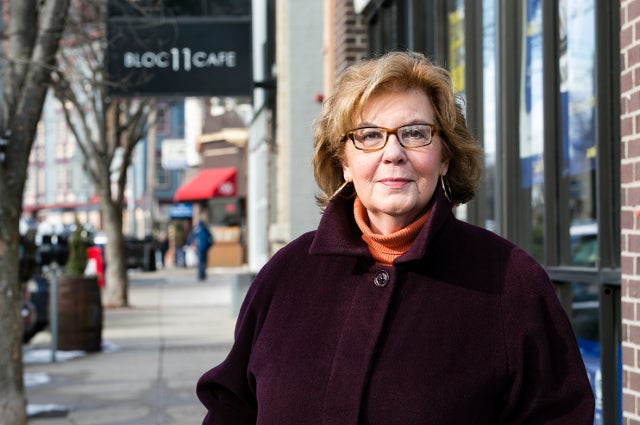 In Somerville’s Union Square, you can enjoy a draught at Bull McCabe’s or Cantina La Mexicana. You can grab a bite at India Palace, the Neighborhood, Sweet Ginger, Machu Picchu, El Potro or Mama Gina’s. And you can shop at the Salvadoran International Market, buy Brazilian at Solução or pick up locally produced foods at New Bombay Market, Capone’s Italian grocery, the Korean Reliable Market and Sherman’s.

The names give you a sense of the rich ethnic diversity of Somerville, Mass., a city proud of its immigrant, working class roots. Now it’s integrating newer immigrants and a growing professional middle class, and Union Square, the site of one of the city’s major redevelopment projects, is poised for economic revitalization.

Trying to understanding how Somerville has been able to remain inclusive while continuing to prosper motivated sociologist Susan Ostrander’s book Citizenship and Governance in a Changing City: Somerville, MA (Temple University Press, 2013). In it, she argues that such success stems in large part from a close relationship between city government and voluntary citizen action associations, in what she calls shared governance. Decisions about the city’s future are made in a framework that enables citizens to share power with elected officials.

“Public decision making becomes a product of dynamic and ongoing engagement by multiple involved actors, both inside and outside government,” writes Ostrander, a professor of sociology in the School of Arts and Sciences and an affiliated faculty member at the Tisch College of Citizenship and Public Service at Tufts. 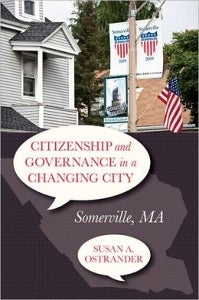 This means that even though new immigrants—mainly from Central and South America and Haiti—are poorly represented in city government, they can be active players in city decision-making through neighborhood associations that advocate for their interests. As yet, new immigrants have not entered the leadership of these associations, but their membership and participation  provide a channel for their concerns, Ostrander says.

Most of Somerville’s hot-button issues are about redevelopment, which requires a difficult balancing act. The trick is to increase city revenues without inflating property values and rents so much that current residents are driven out. In her book, Ostrander recounts several recent major redevelopment projects and finds that voluntary associations were actively involved in decisions and outcomes on those projects.

For instance, when the Somerville Board of Aldermen approved its redevelopment plan for Union Square after a three-year consultation and hearings process, the neighborhood associations’ concerns had clearly been addressed, especially the need for a substantial increase in affordable housing.

An Ethic of Openness

But something else facilitates Somerville’s shared governance and vision for the future—it is a fairly welcoming city. In 45 interviews from 2004 to 2009 with residents who are actively engaged in the community, Ostrander unearthed a common ethic of openness that crossed three major groups: the older residents, working class Irish and Italians who were born and raised in the city; the professional middle class that has been growing there since the 1980s; and the newer immigrants, who started settling there in the 1980s.

“When I asked why Somerville was such a relatively welcoming community, people talked about the shared experience of being low income or working class across racial-ethnic lines. Somerville pride is an established local phenomenon, and that pride is partly about the city’s shared working class immigrant history,” Ostrander says. “As a longtime Somerville alderman told me, ‘Most of the people I talk to [in Somerville] consider themselves working class. They might be professionals, but they’re working class.’ I found the same.”

As she reports in the book, one interviewee told her that “Somerville has never been a one-nationality immigrant city.” Another said that “Somerville seems to have a bit of everybody.” This diversity, according to the residents, has prevented the creation of the ethnic group enclaves that have made other towns more hostile toward newcomers of different classes or races, Ostrander says.

Ostrander points out that Somerville is not devoid of divisions and conflict. “On the contrary, I emphasize throughout the book that there are deep, ongoing struggles about who is involved and how city governance occurs,” she says. And some members of the newer immigrant groups told her “awful stories about what happened to them or their parents or grandparents when they first moved to Somerville in the 1980s,” she says. “But all agree things are getting better.”

Somerville’s success demonstrates how positive change can occur in American democracy. Research shows, Ostrander says, that local political participation is most often the starting point for engagement at the regional, national and even global level.

“That’s the basis for the claim that small to medium-sized cities like Somerville hold special promise for democracy overall, and that the foundation for democracy generally is at the local level,” Ostrander says.