Lacrosse, Softball and Track head to NCAAs; Sailing and Ultimate Frisbee to Championships 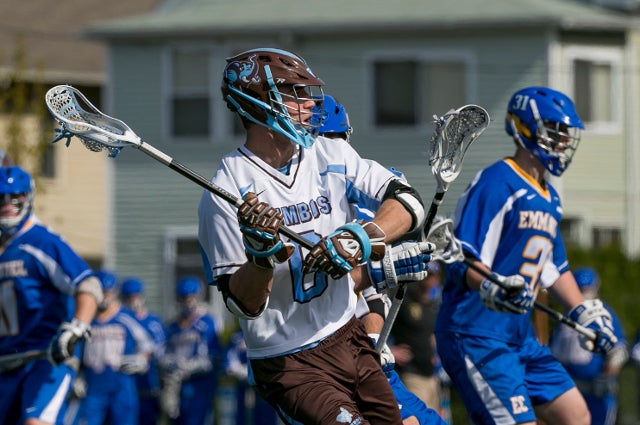 Tufts athletics teams are racking up the victories this spring, and the result is a bumper crop of teams that are playing past graduation as they head to the final rounds of national competition.

Men’s lacrosse senior tri-captain Beau Wood scored seven goals with one assist as the team earned its third NCAA championship game berth with an impressive 21–11 victory at RIT in the national semifinals on May 18.

Tufts made consecutive NCAA championship game appearances in 2010 and 2011, facing Salisbury Gulls in both contests. The Jumbos won the 2010 NCAA title and lost to the Seagulls in the national finals in 2011.

Softball Looks for Another NCAA Championship 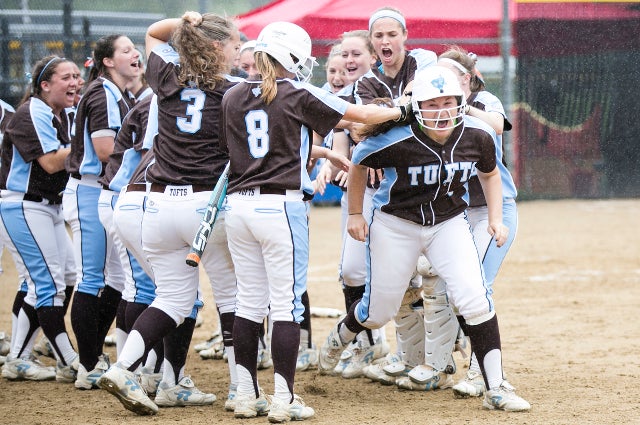 Summer Horowitz, A17, celebrates with her teammates after scoring a run during the Division III Super Regional Championship softball game on May 16. Photo: Alonso Nichols
The defending national champion Tufts softball team swept host Bridgewater State University to win the NCAA Division III Softball Super Regional on May 17; with the victory, the Jumbos (42–3) punched their ticket to the eight-team final in Tyler, Texas. The double-elimination national championship tournament gets under way on May 22. Tufts’ first opponent is East Texas Baptist University. The Jumbos are competing in the NCAA finals for the third straight year and for the fourth time in the past six seasons.

Tufts’ undefeated junior pitcher, Allyson Fournier (23–0), garnered Most Outstanding Pitcher accolades of the Super Regional, while third baseman Brianna Keenan, A15, was chosen as the Most Outstanding Player. Fournier did not allow a run over 12 innings and struck out 24 batters, lowering her NCAA Division III-leading earned run average to 0.40. Keenan went 4 for 6 at the plate in the two games, with two doubles, a triple and two RBIs. She drove in both runs during the 2–0 win in the first game against Bridgewater.

Newly graduated senior Jana Hieber and sophomore Alexis Harrison of the Tufts women’s track and field team will compete at the NCAA Division III Outdoor Championships, hosted by Ohio Wesleyan University in Delaware, Ohio, May 22 to 24. Hieber will conclude her stand-out career by competing in the 400-meter hurdles, while Harrison will run the 100-meter dash.

A five-time All-American indoors and outdoors, Hieber has qualified for all eight NCAA indoor and outdoor championship meets during her Tufts career. This spring she ran the second-fastest 400 hurdles in the nation, with a 58.58 mark, at the New England Intercollegiate Amateur Athletic Association Championship hosted by Westfield State on May 10. The time is the second-fastest in NCAA Division III history, and helped Hieber win the All-New England title.

Harrison is seeking the first All-American honor of her career. At the ECAC championship hosted by RPI recently, she ran 12.13 seconds in the 100 meters to qualify at 19th place. This is her second trip to an NCAA meet, after she placed 16th in the 60-meter dash indoors this year.

On the men’s side, new graduates Jamie Norton and Ben Wallis will conclude their Tufts careers, while sophomore Mitchell Black extends his national qualifying streak as they compete for the Tufts men’s outdoor track and field team at the NCAA Division III championship, also in Delaware, Ohio, May 22 to 24.

Black, who has qualified for all four of the NCAA indoor and outdoor championships during his career, will run the 800 meters. Norton, making his fourth NCAA appearance, is entered in the 1,500 meters. Wallis is among the field in the 3,000-meter steeplechase for the second time in his career.

The Tufts Co-ed Sailing team heads to the College Sailing/Annapolis Performance Sailing Team Race Championship May 31 through June 2. The race brings together 16 of the country’s best racing teams for three days of competition. Each team has three boats, and teams face off against each other one at a time. After a complete round robin, in which each team races against all the others, the top eight teams will meet in a championship round robin, followed by a “Final Four” round in which a national champion will be named.

Co-ed Sailing is also competing in the College Sailing/Gill Coed Championship, which brings together the top 36 teams from the seven Inter-Collegiate Sailing Association conferences. The 10th-ranked Jumbos will vie for the Henry A. Morss Memorial Trophy June 3 to 6.

The Tufts women’s and men's Ultimate Frisbee teams are heading to the USA Ultimate College National Division 1 tournament championships, which will take place May 24 to 26 in Mason, Ohio. The women's team, known as the Ewo, won the New England regional college tournament and are ranked 14th in the country in Division 1.

The men’s team, the Emen, are ranked 15th in the USA Ultimate College National Division 1 tournament.

The Jumbos fell to the Massachusetts Institute of Technology 6–4 in the 2014 NCAA Division III New England Baseball Regional on May 16 at Whitehouse Field in Harwich, Mass. The Jumbos (34–9) ended their 2014 campaign with their fifth national tournament appearance and third since 2010. Tufts’ 34 victories tied the school record, also held by the 2010 team.

Earlier in the week, the baseball team earned three of five major New England Small College Athletic Conference (NESCAC) awards and had four players named to the All-Conference teams. Junior Kyle Slinger was named Pitcher of the Year and to the first team All-Conference. Junior center fielder Connor McDavitt was voted Defensive Player of the Year, while freshman pitcher Tim Superko is the Rookie of the Year. Catcher Nick Cutsumpas, A14, and sophomore shortstop Matt Moser joined Slinger on the first team, while pitcher Christian Sbily, A14, earned second team accolades.