MEDFORD/SOMERVILLE, Mass. (Updated June 19)– Tufts University will unveil a life-sized, bronze statue of its beloved mascot, Jumbo the elephant, this fall to commemorate the 125th anniversary of the world famous circus star's arrival on campus.

Jumbo's new incarnation is being sculpted by Carmel, Calif.-based artist Steven Whyte, a highly regarded animal and portrait sculptor. It will tip the scales at 5,000 pounds and stand more than 11 feet tall and 18 feet long—dimensions that would dwarf the familiar elephant statue that has been a landmark on the Tufts campus green since 1993.

Unlike the current statue of an Asian elephant, the new Jumbo will be based on the actual appearance and size of the famous wild African elephant as seen in contemporary photographs. 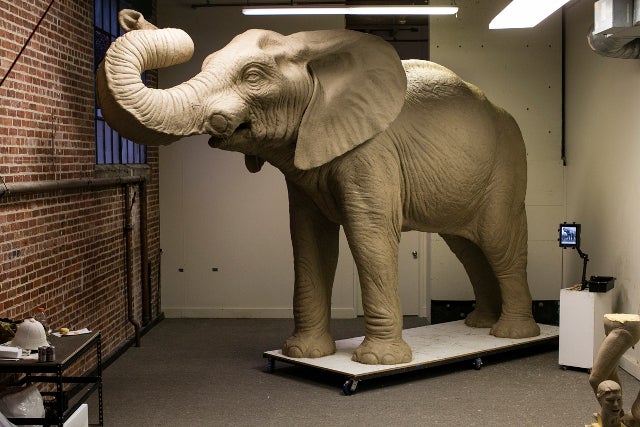 Tufts will also celebrate Jumbo's arrival with an exhibition in the university's art gallery at the Aidekman Arts Center titled "Jumbo: Marvel, Myth & Mascot." The university hopes that the public will gain a new appreciation for the magnificent Jumbo through the statue and the exhibition.

Andrew McClellan, Tufts professor of art and art history and the exhibition's curator, will showcase eight years of research in the exhibition and an accompanying book about Jumbo and his connection to Tufts. "Jumbo instills school pride—he is part of what makes Tufts so special," says McClellan. "Jumbo and Tufts have a unique history."

Tufts alumni were the moving spirit behind the new bronze pachyderm, which will be wholly donor funded. "The current Jumbo doesn’t portray the University mascot properly," says Dick Reynolds, a member of the class of 1967 and former vice president of operations whose gift is underwriting the sculpture. "I thought a new, life-sized, professionally sculpted statue would represent Tufts in its best light."

Alumnus Richard "Dick" Asher, a member of the class of 1953, and his wife, Sheila, are providing funding for installation and landscaping of a garden that will surround the sculpture. 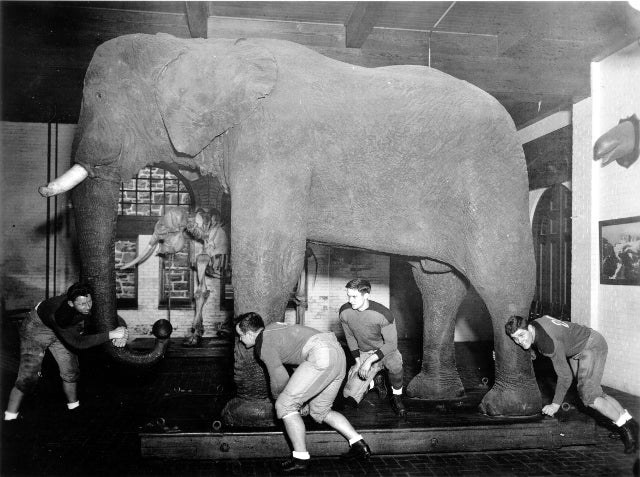 Jumbo in 1935 at Tufts
The story of how Jumbo came to represent Tufts begins in 1885. Famous entertainment entrepreneur and Tufts trustee Phineas T. Barnum bought the African elephant from the London Zoo in 1882.

Billed as the largest elephant in captivity, Jumbo became the star attraction in Barnum's "Greatest Show on Earth" as it toured North America. Thanks to references in the press and advertising, the word "jumbo" became a descriptive reference to anything larger than normal on both sides of the Atlantic Ocean.

After four years, Jumbo's circus career ended abruptly in a Canadian train yard when a locomotive struck him as he waited with other circus animals to be boarded onto another train. Barnum, who was known for his qualities as a promoter, fabricated the story that Jumbo died a hero's death by stepping onto the tracks to push a baby elephant named Tom Thumb out of the way of the onrushing train.

Barnum eventually had Jumbo stuffed and donated to Tufts, where he was put on display in the Barnum Museum of Natural History—a building with science classrooms and laboratories on the Medford/Somerville that was built with funds Barnum donated to the school.

Jumbo became a campus attraction over time and was adopted by Tufts as its mascot. School songs were written in Jumbo's name. Tufts athletic teams invoked Jumbo's strength, bravery and teamwork in saving Tom Thumb at the expense of his own life. Before final exams, students placed pennies in his trunk and tugged his tail for good luck.

In 1975, a fire destroyed the Barnum building and much of its contents, including its prized mascot. Tufts later rebuilt the building and named it named Barnum Hall.

Still, Jumbo's aura lived on. Following the fire, some of Jumbo's ashes were collected in a peanut butter jar and today are kept in the athletic director's office. Tufts athletes rub the ash jar for good luck before their games. Tufts sweatshirts, caps, banners and other paraphernalia carry an image of an elephant. Tufts graduates become lifelong Jumbos.

In 1993, the Class of 1958 donated a former amusement park's statue of a smaller, Asian elephant, which was placed near Barnum Hall to represent the lost Jumbo. The dedication ceremony was held during the Homecoming ceremonies.

A university committee of faculty and staff, headed by McClellan, chose Whyte to create the statue. "We asked Steven Whyte to model the statue after a well-known photograph taken at the London Zoo at the time P.T. Barnum purchased Jumbo in 1882," says McClellan. "This will be an animated and dynamic Jumbo that will survive the test of time and provide an enduring monument for the campus."

Whyte has followed a painstaking process to create the life-like statue. The first step in the process was to create a foam model of the elephant. The foam is then covered with clay and the details get re-sculpted by the artist. The clay is the form from which a rubber mold will be made, a process that includes rubber, plaster and fiberglass. A delicate wax form is then created and dipped in ceramic, forming a shell. The molten bronze is poured, displacing the wax, and then the statue undergoes a final  chasing—the finish surface treatment which includes grinding, sanding, filing, and welding. After that, a patina is applied.  The completed sculpture will then be transported by truck to Tufts and will be lifted with a crane to the site of the current Jumbo on the campus green.

"We chose Steven Whyte for his ability to work in bronze on a monumental scale while translating Jumbo's likeness and dynamic spirit from archival photos with remarkable veracity," says Amy Ingrid Schlegel, director of galleries and collections at Tufts and a member of the committee that selected Whyte. "He demonstrates a rare combination of skills."

Tufts University, located on three Massachusetts campuses in Boston, Medford/Somerville, and Grafton, and in Talloires, France, is recognized among the premier research universities in the United States. Tufts enjoys a global reputation for academic excellence and for the preparation of students as leaders in a wide range of professions. A growing number of innovative teaching and research initiatives span all Tufts campuses, and collaboration among the faculty and students in the undergraduate, graduate, and professional programs across the university's schools is widely encouraged.