Elena Naumova, who studies the spread of water-borne illnesses, looks beyond the data to understand patterns that can save lives 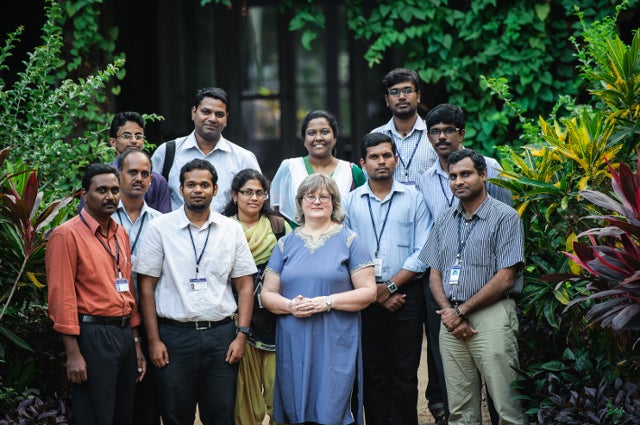 Timing is everything to Elena Naumova. A professor of civil and environmental engineering, Naumova was investigating outbreaks of waterborne infectious diseases in Vellore, in southern India, with an international team of experts when she made an observation no one else had.

“Typically, when people do these kinds of analyses, they use the 12-month Gregorian calendar we are accustomed to. But the local ceremonial or agricultural calendar might be a better way to understand how people interact and how it relates to weather,” says Naumova, an epidemiologist and biostatistician who uses mathematical models to predict disease outbreaks.

For seven years, Naumova has been forging a relationship with researchers and students at Christian Medical College (CMC) in Vellore, where she is an adjunct professor. Each year she travels there with an assortment of students and colleagues from Tufts, most notably Honorine Ward, a professor at the School of Medicine who is an alumna of CMC.

Recently, Naumova and Ward’s research teams have been trying to understand the many environmental conditions that work together to contribute to diarrheal diseases in the villages and urban slums outside Vellore—open latrines with no running water and sporadic water deliveries that people then store in contaminated containers, as well as the presence of flies, cats and cows.

One of the most common infectious waterborne diseases in India is rotavirus, which kills about 150,000 Indian children every year. The severe diarrhea that rotavirus causes doesn’t have to be fatal, but in developing nations with poor water quality and little access to health care, it is deadly far too often.

In the United States, rotavirus was the leading cause of severe diarrhea in young children until a vaccine was introduced in 2006. But the U.S. version of the vaccine, costing roughly $7 per dose, is prohibitively expensive in India, where malnutrition and widespread poverty conspire to make the vaccine less effective.

Last year, the Indian government, in collaboration with an Indian pharmaceutical company, announced the development of a homegrown rotavirus vaccine. In an effort to help roll out the new vaccine as efficiently as possible, Naumova and Ward collaborated with CMC researchers there to assess the seasonality of rotavirus outbreaks. Ideally, the bulk of the target population should get vaccinated before the predicted peaks of viral activity—just the way Americans get the flu shot in the fall before the illness hits hardest around New Year’s Eve. The trick, Naumova says, is knowing when the peak will come.

To find out, the researchers examined the results of rotavirus studies conducted in Southeast Asia between 1966 and 2010, and matched them with local temperature and precipitation data, as well as vegetation data gathered by NASA satellites. All this information showed that rotavirus outbreaks across the region peak in the colder, drier months of the year—findings that were analogous with Naumova’s prior work in both Siberia and Ecuador, despite the radically different climates.

But Naumova points out that the outbreak patterns might have less to do with how the virus interacts with the weather than how its human hosts do.

People living in the villages and slums of Vellore often follow the Tamil calendar, a traditional calendar based on 60-year cycles, with six seasons per year. Though it’s now used mainly for ceremonial purposes, the Tamil calendar is more closely aligned with the two-month weather patterns particular to that part of the world—“the season of the scorching sun, the season of the morning dew, the season of the monsoon,” says Naumova, who also holds adjunct appointments at the School of Medicine and the Friedman School of Nutrition Science and Policy and is a Tisch College faculty fellow.

Cultures organize their social lives around the seasons, she adds. Major holidays tend to happen at the same time every year; people travel for big family celebrations.

“So when you think through the social calendars, you can see how it’s related to the outbreak of infectious diseases,” she says. “And when we took data from meteorological stations and started to align it with the Tamil calendar, patterns of infectious disease started to make a lot more sense.” An awareness of this seasonality should help with targeting the administration of the rotavirus vaccination to ensure it is most effective, she notes.

That’s why Naumova feels so strongly that engineering students should have hands-on experiences abroad and get to know the people their research directly impacts. “I have to come to the village and learn how and why people are getting sick in order to build realistic models,” she says. “I believe it’s extremely important for statisticians to see where their data comes from.”